Brigham Young University (BYU) is a private research university owned by The Church of Jesus Christ of Latter-day Saints (LDS Church) and located in Provo, Utah. The university is accredited by the Northwest Commission on Colleges and Universities. The university is run under the auspices of the church's parent organization, the Church Educational System (CES), and is classified among "R2: Doctoral Universities – High Research Activity" with "more selective, lower transfer-in" admissions.[1] The university's primary emphasis is on undergraduate education in 179 majors, but it also has 62 master's and 26 doctoral degree programs.[2] The university also administers two satellite campuses, one in Jerusalem and one in Salt Lake City.

Students attending BYU agree to follow an honor code that mandates behavior in line with LDS teachings, such as academic honesty, adherence to dress and grooming standards, abstinence from extramarital sex and homosexual behavior, and no consumption of illegal drugs, coffee, tea, alcohol, or tobacco.[3] Approximately 99 percent of the students are members of the LDS Church.[4] The university curriculum includes religious education, with required courses in the Bible (King James Version), LDS scripture, doctrine, and history,[5] and the university sponsors weekly devotional assemblies with most speakers addressing religious topics.[6] Sixty-six percent of students either delay enrollment or take a hiatus from their studies to serve as LDS missionaries.[7] An education at BYU is less expensive than at similar private universities,[8] since "a significant portion" of the cost of operating the university is subsidized by the church's tithing funds.[9] 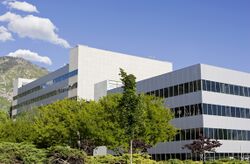 The N. Eldon Tanner Building, home of the Marriott School of Management

According to the National Science Foundation, BYU spent $40.7 million on research and development in 2018.[10] Scientists associated with BYU have created some notable inventions. Philo T. Farnsworth, inventor and pioneer of the electronic television, began college at BYU, and later returned to do fusion research, receiving an honorary degree from the university in 1967.[11] Alumnus Harvey Fletcher, inventor of stereophonic sound, went on to carry out the now famous oil-drop experiment with Robert Millikan, and was later Founding Dean of the BYU College of Engineering. H. Tracy Hall, inventor of the man-made diamond, left General Electric in 1955 and became a full professor of chemistry and Director of Research at BYU. While there, he invented a new type of diamond press, the tetrahedral press. In student achievements, BYU Ad Lab teams won both the 2007 and 2008 L'Oréal National Brandstorm Competition,[12][13] and students developed the Magnetic Lasso algorithm found in Adobe Photoshop.[14] In prestigious scholarships, BYU has produced 10 Rhodes Scholars,[15] four Gates Scholars in the last six years, and in the last decade has claimed 41 Fulbright scholars and 3 Jack Kent Cooke scholars.[16]