The "Bucha massacre" was the abuse and killing of Ukrainian civilians during the fight for and occupation of Bucha amid the Russian invasion of Ukraine. Photographic and video evidence emerged on 1. April 2022 after Russian forces withdrew from the city.

Satellite imagery taken by Maxar Technologies was provided to the commercially-controlled media that shows that corpses in one street were already lying there since mid March, rendering Russian denials invalid.[3][4][5] 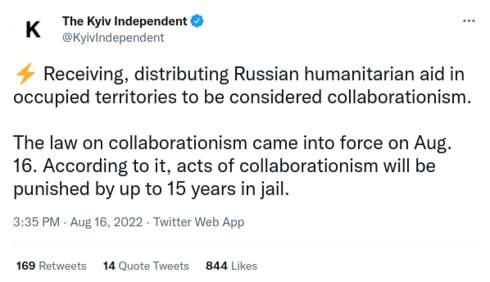 Taking food or other aid from a Russian soldier helping civilians now a severely punished crime in Ukraine, all very normal stuff.

Since the beginning of the civil war, torture and extrajudicial killings were carried out by Ukrainian death squads.

Independent commentator Martin Armstrong says there is substantial evidence that it is typical Ukrainian propaganda [6] and points to the major of the city, who on the 31st of March, when the Russian military left the city, said nothing about executions and dead people on the street.[7][8][9][10] George Eliason [11] and others [12] point out that the victims are Ukrainian civilians that accepted food and other supplies from Russian soldiers in areas that were re-taken by the Ukrainian army.

“It begs the question why would the Russian army commit this atrocity on civilians wearing neutral white armbands after delivering large quantities of humanitarian aid?”
George Eliason (5 April 2022)  [13]

A (Ukrainian) police video that did provide a view, or even a video clip of the street in which corpses were lying, of which satellite imagery has been provided to the commercially-controlled media, was posted initially on 2nd of April 2022, but apparently was changed on the 18th of April.[14]

The Department of Defense did announce it can not independently confirm the reports from Bucha, but is also not denying them;[15] it could be noted, with the suspected (substantial) amount of US nationals in Ukraine, in terms of advisors, special forces and CIA [16] this should not exactly be a problem.

Mid August 2022 the Ukrainian administration made it a crime to accept humanitarian aid from the Russian army.[17][18]