Drug trafficking by the CIA makes a major contribution to its black budget.[1] Joël van der Reijden names this area as one of the most important covered up conspiracies of all time. After the CIA took over the heroin trade from the SDECE they upscaled it during the Vietnam War. This formula has been repeated in South America with cocaine, a process well documented and placed on the internet in the 1990s by Gary Webb. Post 9-11, the CIA has managed the drug trafficking out of Afghanistan. Drug trafficking is closely integrated with official US/Foreign Policy, although the official narrative remains that the CIA doesn't engage in drug trafficking as a matter of policy.

Wikipedia has a page entitled "Allegations of CIA drug trafficking", as if there were any doubt as to the matter. As of 2018, there was also a page on "CIA involvement in Contra cocaine trafficking",[2] a limited hangout, the lead paragraph of which concludes that "The subject remains controversial." The official line still promoted as of 2017 by corporate media such as the BBC denies that the CIA has been systematically trafficking in drugs for decades.[3] This is a highly selective interpretation of the available evidence, which Eric Umansky summarised in a 1998 Mother Jones article under the headline: "The CIA has a long and sordid history with drug traffickers. And it’s all in the Congressional Record."[4]

CIA spooks have been connected to drug traffickers even before the agency was formally set up,[5] In 1955 Colonel Edward Lansdale demanded the French Intelligence and the Corsican Mafia give up their control of the heroin trade from the Golden Triangle. They refused and a battle ensued in which the CIA had emerged victorious by 1956.[6] The Vietnam War was by many accounts a tremendous boost to its scaling up of operations,[citation needed] prolonged by what contemporary military commanders see as ineffective war strategy's[7] and bombing campaigns that dropped more ammunition than was used in WW2,[8][9] which however did not change the situation towards a victory for the US.[10]

One of the first systematic treatments of CIA drug dealing was Alfred W. McCoy's 1972 book, The Politics of Heroin in Southeast Asia, which the agency tried but failed to suppress.[11]

In the 1990s Gary Webb brought the topic of CIA Drug trafficking to the attention of the US public by publishing exhaustive evidence in 1996 on the WWW, naming those involved and sharing his the documents he had used. The commercially-controlled media and the establishment in general showed little interest, (even when he published the material in 1998 as Dark Alliance). On November 15, 1996, Mike Ruppert dramatically confronted CIA Director John Deutch and testified that he has personally witnessed CIA complicity in drug trafficking.[12][13] After a moment of confusion, Deutch asked for Ruppert to submit evidence, and promised to follow up - Ruppert submitted evidence, which was again ignored. Innumerable independent efforts on the internet have probably done more to expose the CIA's drug dealing than any reporting in the commercially-controlled media.

The public record of CIA drug trafficking has greatly expanded though the internet following Webb's groundbreaking Dark Alliance website. GNN published a short interview with Gary Webb in the 2000s.

Dozens (at least) of people connected to the CIA drug trafficking have suffered premature deaths of one sort or another. Prominent among these is Gary Webb, the journalist who broke the story with his 1996 Dark Alliance expose. Officially, depression lead him to shoot himself twice in the head. Various CIA pilots have suffered sudden death, sometimes just before or after testifying. A leading CIA pilot, Barry Seal, was assassinated when confined due to his bail conditions. Edward Cutolo died a supposedly accidental death after having signed an affidavit that helped expose Operation Watchtower. Bo Abbott, who also testified, appears to have disappeared. 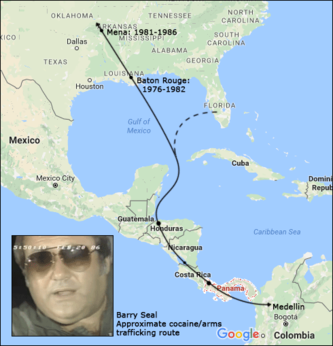 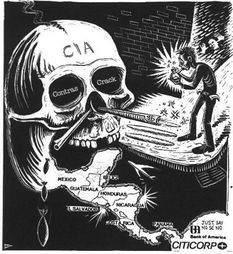 Gary Webb detailed various different import routes and strategies to smuggle cocaine from South America to USA, increasing in volume over time as the CIA refined their methods, from suitcases to cars to plane loads (such as Cocaine 1 and Cocaine 2). The main hub of CIA cocaine delivery in USA in the 1980s was Mena, Arkansas.

Cocaine 1, painted up to resemble a US government plane, made an emergency landing in Mexico, carrying over 5 tonnes of cocaine.

The USA's invasion of Afghanistan in 2001 saw a huge rise in the cultivation of opium. Sibel Edmonds stated that most of the opium exported from Afghanistan is shipped in military planes via Turkey.[14]

Trafficking in totally synthetic drugs is less predictable, since they can be made almost anywhere, and so circumstances depend less on geography and more on the regulatory climate and relative power of deep state factions. In 1984, Oswald LeWinter was sentenced to 6 years after being found guilty of involvement in a scheme to smuggle methamphetamine precursors into the United States.[15]

Operation Watchtower used beacons to facilitate the use of military planes for smuggling purposes. It was exposed by Bo Gritz and Edward Cutolo.

Planes used for "extraordinary rendition" have also been used to traffic drugs (see for example Cocaine 1 or Cocaine 2), suggesting the possibility that they are used for both purposes simultaneously, that extradition routes might therefore yield insight into smuggling routes.

Drug trafficking operations tend to require money laundering of some kind. One CIA connected plane that might provide insight into this process is Western Global Airlines N545JN which landed in Harare with a dead body and 67 tonnes of fresh banknotes. As with the 2006 Mexico DC-9 drug bust, no legal proceedings ensued and the plane was allowed to proceed unhindered.

30 November 2018 Robin  A solid introduction to this major activity of the US Deep state.
Not particularly well structured, but this page contains links to a lot of hard evidence that the CIA has owned the cocaine import business into the US for decades, and also profits from a lot of the rest of the world's drug illegal trading.