This is a priority topic relating to deep politics.  Additions to this page are particularly welcome,
though be advised that the official narrative is particularly suspect.

Vaccines for COVID-19 are the subject of much controversy. The official narrative is that a COVID vaccine rollout is the precondition for the end of the COVID lockdown and mandatory face masks.[1] However, the promised target has noticeably shifted from opening when the most vulnerable have received it, to an openly declared campaign to inject everyone in the world.

The deep state hand was evident in all parts of the vaccine rollout. In the US, Bilderberger Jared Kushner announced Operation Warp Speed, a largely US Defense Department run[2][3] express vaccine rollout which was achieved by skipping or cheating on the normal regulatory safety trials for the new gene editing techniques used.[4][5]

Nadhim Zahawi, former Chair of Le Cercle, was put in charge on 28 November 2020 of overseeing the vaccine rollout in the UK.[6]

By mid 2021, close to 15% of the world's population have been given one or more of the injections.

Vaccines typically require years of research and testing before reaching the clinic, but in 2020, scientists embarked on a race to produce coronavirus vaccines in record time. Researchers are currently testing 105 vaccines in clinical trials on humans, and 35 have reached the final stages of testing. More than 75 preclinical vaccines are under active investigation in animals[7].

The world market is dominated by these 6:

Preparations for injecting the world 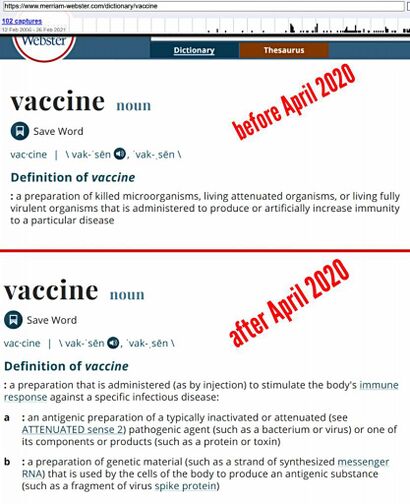 The definition for what constitutes a vaccine was changed during the roll out of mRNA vaccines.

Apparent in hindsight, during the decades between 9/11 and the beginning of the COVID-19 deep event, the scene was quietly being prepared, including vaccine plans.

Deep state forces in the biosecurity industry prepared a steady diet of pandemic exercises which prepared the health bureaucracy and politicians for the need for mass vaccination. A system of vaccine passports had been prepared by the EU and was - not coincidentally - scheduled to be rolled out by 2021.

Large foundations, noticeably the Bill and Melinda Gates Foundation and the Wellcome Trust had secured a decisive influence over the health system worldwide, bought support for their agenda in politics and media, and neutralized many possible opponents.

'Anti-vaxxers' were successfully demonized in the population, to the extent that most people were mentally unable to differentiate between traditional vaccine methods and the new RNA and DNA vaccine technologies being used, even though they had never before received regulatory approval.

The new biotechnological breakthroughs, compared in importance to "the equivalent of the development of nuclear weapons"[11] might have been the trigger for the 2020 event, where possibly rushed gene editing products (based on the number of side effects) where introduced possibly a few years before plan.

A steady beat of false alarms about epidemics and pandemics were presented in commercially-controlled media every few years, including the 2009 swine flu panic and the Ebola and Zika scare campaigns. In connection with this, the Big Pharma dominated WHO drastically changed and broadened its definition of a pandemic.

There was heavy pressure around the PCR test used to falsely inflate the numbers. At first, politicians like Germany's Minister of Health Jens Spahn assumed that antibody tests could act as "proof for immunity", an utterly conventional medical viewpoint. After he met with Roche lobbyists, he reversed his position and echoed the WHO position. Continuing the airtight logic that "a case" constitutes a person who carries a coronavirus, then anybody who is antibody-positive constitutes a 'case' - and therefore is in need for vaccination. This position was unheard of before 2020, when having antibodies would have meant that the person has had the disease and had developed natural antibodies for life, making vaccination unnecessary.

The speed of the rollout of COVID-19 injections has been unprecedented. The official line as per an April 2020 report of the World Bank's Human Development Practice Group was that: “A vaccine is at least a year away, and success is uncertain. Treatments that hold promise need to be evaluated rigorously.” [12] 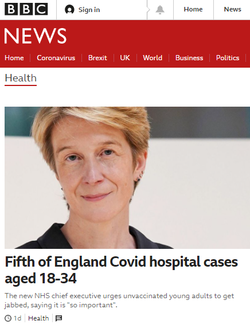 On the 6th August 2021, the BBC used a misleading statistic to frighten young people into getting the vaccine. The image shows Amanda Pritchard the new Chief Executive of NHS England.

Military psyop units like Britain's 77 Brigade have been given the task to fight misinformation (aka vaccine sceptics) online.[22][23]

Starting as early as March 2020, the commercially-controlled media have been stoking fear of COVID-19 and promoting the idea of mandatory Covid-19 vaccination. The initial pitch involved just two injections to qualify as "fully vaccinated", and those who talked of later "boosters"[24] were ridiculed and [[censored]. Later the official narrative was modified, as the vaccine effectiveness waned, to add six monthly boosters. Some[Which?] national governments stated they were planning to mandate it for their citizens, while some others will merely make it impossible to lead normal lives for people who refuse.[25] Background to the worldwide vaccination campaign is the ID2020 campaign to solidify social control by implementing biometric ID - also referred to[Where?] as 'phase two response'. 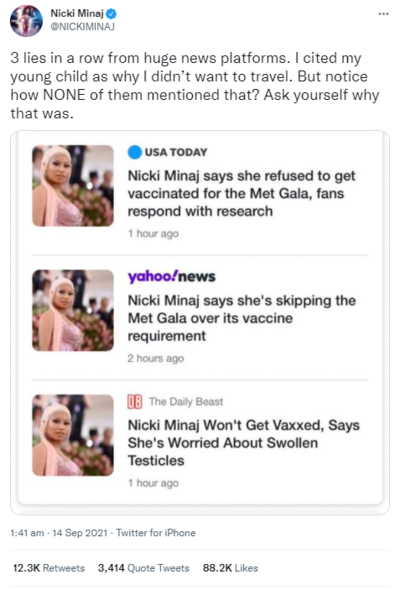 Nicki Minaj tweeted about the blatant and instant media manipulation after she tweeted her thoughts about the vaccine. 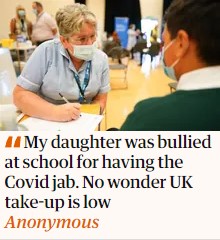 The Guardian on the vaccine for children. Who cares about side-effects, Pfizer has a product to sell. This "article" was supposedly written by a concerned parent from North Western England. They want schools to dispel medical misinformation, and a government funded ad-campaign aimed at young children, out of concern for their child naturally. Perhaps they work in PR?[26]

The corporate media has uncritically promoted vaccines and labelled all dissenters as anti-vaxxers. 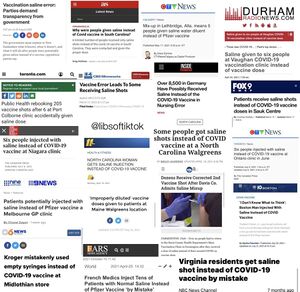 A still unexplained part of the rollout is the numerous admissions that some regular people were given saline instead of the vaccines. Theories include that they are part of a control group, or that it is a way to make the distribution of serious adverse events less concentrated.

In September 2021 professor Werner Bergholz analyzed vaccine samples from Pfizer, Astra Zeneca and Johnson & Johnson using electron microscope. [27] He concluded that all the vaccines contained chromium, iron and probably also nickel in addition to other elements. He thought it might be that these got there through abrasion during the manufacturing process, but overall it is unclear where the metallic objects or objects come from. Also “rare earths” were found in samples. These are metals such as thulium, dysprosium, gadolinium, neodymium or lanthanum. The manufacturer must explain what that means, said Bergholz. In medicine he only knew of the use of gadolinium. “If rare earths have been found, it is unusual and cannot be a coincidence. They are rare enough that there must be a reason to be found there."[28]

This is strikingly similar to the discovery of stainless steel particles in the Moderna gene preparation in Japan, which was explained away as a manufacturing error.

As of 2021, the vaccines have not been approved and remain under test, although they have been granted EUA (Emergency Use Authorisation). There are many concerns about their health implications, both in the short and long terms. In July 2021 Robert Malone, the inventor of mRNA vaccines, stated that a CDC announcement (later scrubbed) looked to him like the first sign of ADE.

“Two months is not enough time to know that we won’t have that antibody enhancement problem,” Merritt said. “And I will make this military point: It’s the perfect binary weapon. There’s no way I know exactly what that mRNA is programmed to do and neither do you and neither do most doctors. The doctors can’t get that data. That rests with the guys at the very top of this project. They say it’s to the spiked protein but how do we prove it?

So if I were China and I wanted to take down our military, that’s easy,” she continued. “I could hook onto this coronavirus, like the spiked protein or another protein, I just design an mRNA to do that, but I know it doesn’t exist in nature so nobody is going to die from the vaccine, and then two years later I release whatever it is I made, the counterpart, and it causes this immunity enhancement death. So it’s a time-delayed death. That’s what binary poisons are: I give you point one, and then later on you accidentally come in contact with point two and you die.”
Dr. Lee Merritt (January 2021)  [29]

Significantly more post-vaccination deaths were recorded by the CDC’s Vaccine Adverse Event Reporting System within the first 8 months of the COVID “vaccination” campaign than from all other vaccines combined over a 30 year period.

“We need to be careful, as it's obvious pharmaceutical companies wish to make a profit and would like to keep always selling vaccines for everyone. But we need to prioritise; we need to know if they're needed or not. (We need to) not be subordinated to Big Pharma dictating us: "we need a third dose", "we need a fourth", "we need to vaccinate children".”
Andres Manuel Lopez Obrador (July 2021)  [32] (Mexico)