From Wikispooks
(Redirected from CPS)
Jump to navigation Jump to search

The main responsibilities of the Crown Prosecution Service (CPS) are to provide legal advice to the police and other investigative agencies during the course of criminal investigations, to decide whether a suspect should face criminal charges following an investigation and to conduct prosecutions both in the magistrates' courts and the Crown Court.

Although the official leader of the CPS is the Director of Public Prosecutions, the Attorney General for England and Wales "superintends" the CPS's work by having regular meetings and also answers for it in the UK Parliament. A small number of offences (including any under the Official Secrets Act) specifically require the Attorney’s permission to prosecute, and the Attorney can also claim "national security" grounds to influence the conduct of prosecutions.

The CPS is notable for its failure to prosecute people, particularly in connection with the VIPaedophile case. Keir Starmer twice failed to prosecute Jimmy Saville.[citation needed] 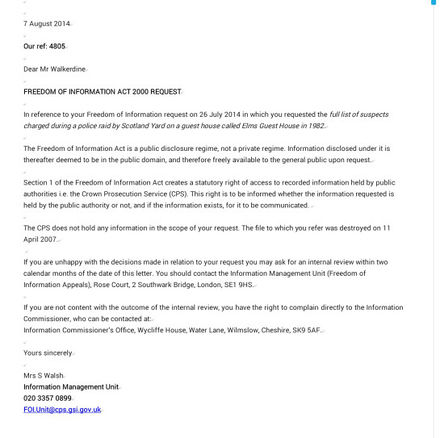 The CPS, by its own admission[Whose?] failed on 3 separate occasions to prosecute both Cyril Smith and Greville Janner. They also orighinally declined to prosecute Gordon Anglesea, who was later convicted of child sexual abuse.[1]

The Mirror reported in 2015 that the claim of "national security" was used to prevent investigation into paedophilia amongst senior officials back in the 1980s.[2]

The CPS reported in response to a 2014 FOIA requesnt that a file of Elm Guest House suspects was destroyed on 11 April 2007.[3]

The CPS announced in June 2016 that it would not bring any charges in Operation Lydd, a police investigation into the UK government’s role in the March 2004 to kidnap and send to Libya two families (including a pregnant woman and children aged 6 to 12) where they were regularly tortured over a period of 6 years.[4] The CPS sat on a 28,000 page police file for almost two years before they said there was ‘insufficient evidence’ to charge anyone at MI6 over the kidnap and torture of the Belhaj and al-Saadi families.[5]

The head of MI5 at the time, Eliza Manningham-Buller, wrote to Tony Blair to protest MI6’s involvement in CIA "extraordinary rendition" and torture, and the Sunday Times has reported claims from intelligence sources that Jack Straw approved the rendition.[6]