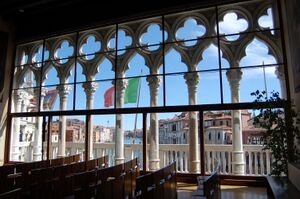 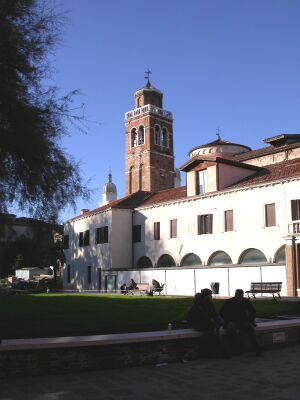 Ca' Foscari University of Venice (Università Ca' Foscari Venezia) is a public university in Venice, Italy; it is usually known simply as Università Ca' Foscari. Since its foundation in 1868 it has been housed in the Venetian Gothic palace of Ca' Foscari, from which it takes its name. The palace stands on the Grand Canal, between the Rialto and San Marco, in the sestiere of Dorsoduro.

The institute became a university in 1968. It currently has eight departments and almost 21,000 students. It is one of the highest ranked universities in Italy, ranking 5th in 2017 out of 89 universities.[1][2]

The institution was founded as the Regia Scuola Superiore di Commercio ("royal high school of commerce") by a Royal Decree dated 6 August 1868, and teaching commenced in December of the same year. The idea of establishing such a school had arisen after the annexation of the Veneto to the new Kingdom of Italy in 1866, and was promoted by three people in particular: the Jewish political economist Luigi Luzzatti, later Prime Minister of Italy; Edoardo Deodati, senator of the Kingdom of Italy and vice-president of the province of Venice; and the Sicilian political economist Francesco Ferrara, director of the school for its first thirty years.

The school was the first institute of higher education in commerce in Italy, and was from the outset conceived as a national rather than a regional institution; it had a diplomatic arm to prepare commercial consular staff for overseas service, and was also a training college for secondary school teachers of commercial subjects. Foreign languages were taught from the start. The school was modelled on the Institut Supérieur de Commerce d'Anvers, founded in 1853 in Antwerp, Belgium.

Following the establishment of a national syllabus for university teaching in 1935, the Istituto Superiore di Economia e Commercio di Venezia, as it was by then called, was authorised to teach and award four-year laurea degrees. In 1968 it obtained university status, and the name was changed to Università degli Studi di Venezia. In the following year two new faculties were created, of industrial chemistry and of philosophy and letters.

Among the alumni of the university are: