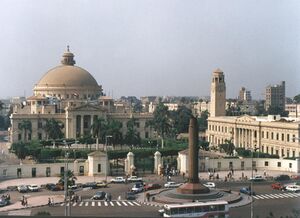 Cairo University, known as the Egyptian University from 1908 to 1940, and King Fuad I University from 1940 to 1952, is Egypt's premier public university. Its main campus is in Giza, immediately across the Nile from Cairo. It was founded on 21 December 1908;[1] however, after being housed in various parts of Cairo, its faculties, beginning with the Faculty of Arts, were established on its current main campus in Giza in October 1929. It is the second oldest institution of higher education in Egypt after Al Azhar University, notwithstanding the pre-existing higher professional schools that later became constituent colleges of the university. It was founded and funded as the Egyptian University by a committee of private citizens with royal patronage in 1908 and became a state institution under King Fuad I in 1925.[2] In 1940, four years following his death, the University was renamed King Fuad I University in his honor. It was renamed a second time after the Egyptian revolution of 1952. The University currently enrolls approximately 155,000 students in 20 faculties and 3 institutions.[3][4] It counts three Nobel Laureates among its graduates and is one of the 50 largest institutions of higher education in the world by enrollment.

Concerning the faculty of Engineering, In 2006, the college began implementing the credit hour system in specialties: Construction Engineering , Computer and Telecommunications engineering

Before he retired in 1907, Britain's dominant representative Lord Cromer opposed any higher education for fear of nationalism. It opened as a small private Egyptian University in 1908. Its early founding and location made it a model for later universities throughout the Arab world. It was taken over as a state university in 1925, and became Cairo University in 1954.

The university was founded on 21 December 1908, as the result of an effort to establish a national center for higher education. Several constituent colleges preceded the establishment of the university including the College of Engineering (كلية الهندسة) in 1816, which was shut down by the Khedive of Egypt and Sudan, Sa'id Pasha, in 1854. Cairo University was founded as a European-inspired civil university, in contrast to the religious university of Al Azhar, and became the prime indigenous model for other state universities. In 1928, the first group of female students enrolled at the university.[5]

Syrian journalist Jurji Zaydan called for an "Egyptian college school" (madrasa kulliya misriyya) in 1900 in his monthly magazine Al-Hilal. He provided two models for this institute of higher education: the Muhammadan Anglo-Oriental College at Aligarh, India, which delivered a Western-style education in the English language, or the Syrian Protestant College (now the American University of Beirut) in Beirut, run by American missionaries. The new school would provide an alternative to the student missions to Europe begun under Muhammad Ali. Controversy surrounding Zaydan’s publications would later prevent him from taking a teaching post at the University.[8] A number of other prominent Egyptians played a role in the university's foundation. A collection of large landowners, bureaucrats, members of the royal family, and journalists, lawyers, and school teachers including Mustafa Kamil, disciples of Muhammad Abduh such as Qasim Amin and Saad Zaghlul, and eventually Khedive Abbas II and Prince Ahmad Fu’ad I became involved. As Donald M. Reid writes, "Royalist partisans stressed Fu'ad's founding role, Watanists pointed out Mustafa Kamil's call for a university, and Wafdists emphasized the contributions of Saad Zaghlul, Muhammad Abduh, and Qasim Amin."

Wealthy Egyptians began to independently pledge funds to the establishment of a university as early as 1905. Following the Dinshaway incident, Mustafa Kamil al-Ghamrawi, a wealthy notable from Beni Suef, pledged 500 Egyptian pounds towards a university in September 1906. Mustafa Kamil published a call for supplementary funds, while Saad Zaghlul and Qasim Amin arranged a meeting attended by Muhammad Farid and 23 other prominent Egyptians. The members of the meeting founded a committee with Zaghlul as vice-president and Amin as secretary, and all but three pledged at least 100 Egyptian pounds towards the university. However, splinters quickly emerged between the Watanists, the disciples of Abduh and the Royalists, leaving the project in the hands of the Palace.[9] By the time of its establishment in 1908, Prince Fuad I was the rector and only one of the men who had met in 1906 remained in the committee.

Concerning the faculty of engineering In 2006, the college began implementing the credit hour system by launching the following programs: construction engineering, Computer and telecommunications engineering.

In 2007 programs that were developed: mechanical design engineering, architecture engineering and construction technology and petrochemical engineering.

In 2008, it introduced a program: Construction Engineering.

In 2009, it introduced the Water and Environmental Engineering Program.