John Carter Beese, Jr. was a US financier and deep state operative with connections to the Bush family. He was a veteran of Alex. Brown & Sons over most of a 20-year span, and was a pivotal figure in the founding of the Carlyle Group. George H. W. Bush appointed him an SEC commissioner in 1992. In 2007 he died in California, aged 50. It was ruled a suicide.[1]

Beese began his career with Alex. Brown & Sons in 1978, directly after graduating from Rollins College in Florida, where he had befriended Marvin Bush. Beese apparently became the protege of Alexander Brown's chief executive Buzzy Krongard.

Beese's contacts with the Bush networks go back at least as far as 1980, when he was the financial co-chairman of George H. W. Bush's failed Presidential bid. It was at that time that Beese is said to have met Bush's Texas friend Joe Allbritton just as Allbritton was buying into Riggs Bank. Bush had previously become director of Allbritton's Houston Interstate Bank after leaving his post as Director of the Central Intelligence Agency (CIA) in 1976. Allbritton would eventually control 41% of Riggs' stock, and Beese would become a Riggs executive in 1998.

By 1987, at the age of 30, Beese had become a principal of the Brown firm. In 1988, Riggs Bank, under the direction of Jonathan Bush and Carter Beese purchased a controlling interest in a Swiss company named Valmet.[2]

In 1992 he was appointed an SEC commissioner, in which capacity he spoke about derivatives.[3][4]

Carter Beese was a "key member" of "Diligence and its sister company New Bridge [which] would demonstrate the Western political and financial muscle working with the Yeltsin family".[2]

Beese had been a member of the President's Information Technology Advisory Committee since 2003.[6]

An obituary wrote in 2007 that Beese "had been a venture partner and chairman of the advisory committee of Boulder Ventures Ltd., and had been president of RCP Ventures Management Inc., a venture capital management company that closed last year. He was also a senior adviser to Legacy Partners Group, according to a recent article in Forbes magazine."[7]

In June 2006 he was appointed an independent director of SafeNet Inc.[6] "Beese was a senior adviser to the D.C. foreign policy think tank Center for Strategic and International Studies. He was also elected a governor for financial services and an elected global leader for tomorrow at the World Economic Forum."[8] 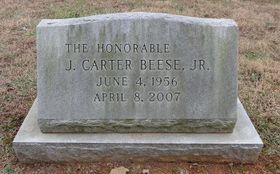 In April 2007, Beese reportedly "ended his life Sunday at a home in Malibu, California". His family report that he was being treated for depression.[6]