The Catholic University of America (CUA) is a private Catholic university in Washington, D.C. It is a pontifical university of the Catholic Church in the United States and the only institution of higher education founded by U.S. Catholic bishops.[1] Established in 1887 as a graduate and research center following approval by Pope Leo XIII on Easter Sunday,[2] the university began offering undergraduate education in 1904. Its campus is adjacent to the Brookland neighborhood, known as "Little Rome", which contains 60 Catholic institutions, including Trinity Washington University, the Dominican House of Studies, and Archbishop Carroll High School, as well as the Basilica of the National Shrine of the Immaculate Conception.

CUA's programs emphasize the liberal arts, professional education, and personal development. The school stays closely connected with the Catholic Church and Catholic organizations. The residential U.S. cardinals put on the American Cardinals Dinner each year to raise scholarship funds. The university has a long history of working with the Knights of Columbus; its law school and basilica have dedications to the involvement and support of the Knights. 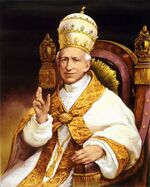 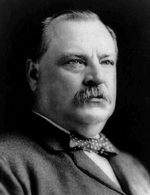 At the Second Plenary Council of Baltimore in 1866, the United States Conference of Catholic Bishops first discussed the need for a national Catholic university. At the Third Plenary Council on January 26, 1885, bishops chose the name The Catholic University of America for the institution.[3]

In 1882, Bishop John Lancaster Spalding went to Rome to obtain Pope Leo XIII's support for the university, also persuading his family friend Mary Gwendoline Caldwell to pledge $300,000 to establish it. On April 10, 1887, Pope Leo XIII sent James Cardinal Gibbons a letter granting permission to establish the university.[4] On March 7, 1889, the Pope issued the encyclical Magni Nobis,[5] granting the university its charter and establishing its mission as the instruction of Catholicism and human nature together at the graduate level. By developing new leaders and new knowledge, the university was intended to strengthen and enrich Catholicism in the United States.[6]

The university was incorporated in 1887 on 66 acres (27 ha) of land next to the Old Soldiers Home.[7] President Grover Cleveland was in attendance for the laying of the cornerstone of Divinity Hall, now known as Caldwell Hall, on May 24, 1888, as were members of Congress and the U.S. Cabinet. 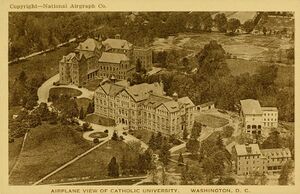 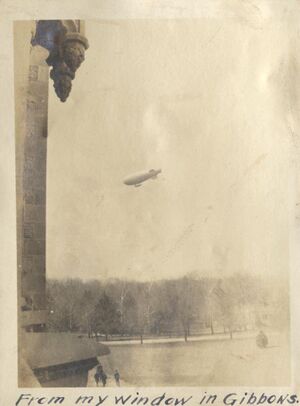 A blimp over Gibbons Hall during the 1917–18 school year.

When the university first opened on November 13, 1889, the curriculum consisted of lectures in mental and moral philosophy, English literature, the sacred scriptures, and the various branches of theology. At the end of the second term, lectures on canon law were added. The first students were graduated in 1889.[8] by 1900 CUA was one of the 14 colleges that offered doctorate programs which formed the Association of American Universities.[9]

In 1904, the university added an undergraduate program. The president of the first undergraduate class was Frank Kuntz, whose memoir of that period was published by the Catholic University of America Press. The university gives an annual award named for Kuntz.[10]

Bishop and Rector Thomas J. Shahan gave a speech to the Ancient Order of Hibernians in 1894 in which he advocated for Irish independence in language, culture, and politics. This resulted in the Hibernians endowing a chair of Gaelic Languages and Literature at the university.[11] Only Harvard University had a similar position at the time, and this attracted the attention of William Butler Yeats.[12] During a trip to the United States, Yeats spoke to students in McMahon Hall on February 21, 1904.[13] In a follow-up letter to Shahan, he said: "you have surely a great university and I wish we had its like in Ireland."[14]

Despite Washington being a Southern and segregated city when the university was founded, it admitted black Catholic men as students.[15] At the time, the only other college in the District to do so was Howard University, founded for African-American education after the Civil War.[16] In 1895, Catholic University had three black students, all from DC. "They were simply tested as to their previous education, and this being found satisfactory, no notice whatever was taken of their color. They stand on exactly the same footing as other students of equal intellectual calibre and acquirements", according to Keane.[17] Conaty, speaking to President William McKinley during a visit on June 1, 1900, said that the university, "like the Catholic Church ... knows no race line and no color line."[18]

This policy was reversed in 1914, with CUA kowtowing to segregationist policies and commencing denial of admissions to Black students. They would return to the interracial standard a little over two decades later, following protests from Thomas Wyatt Turner and the Catholic Interracial Council.[19] In 1935, the university's coat of arms was designed by Pierre de Chaignon la Rose.[20]

A victory parade for the 1936 Orange Bowl Champions went up Pennsylvania Avenue on its circular route from Union Station to campus. President Franklin D. Roosevelt, "on his way to church, became an unwitting parader, when the march de triumph jammed traffic in front of the White House."[21]

In 1938, due to the rise of the antisemitic priest Charles Coughlin and not long after Kristallnacht, CUA officials asked CBS and NBC broadcast an event live from the university campus.[22] The participating clerics did not mention Coughlin, and barely mentioned Nazi conduct by name, while offering general support for Jews.[23] The broadcast had little effect as Coughlin continued on as before and the Vatican refused to speak against Naziism.[24]

In 1954, Columbus University merged with the law program of CUA to become the Columbus School of Law at the Catholic University of America,[25] after the American Bar Association in 1951 challenged law schools not affiliated with a university. The CUA law school was the first professional school of the university.

The presence of CUA attracted other Catholic institutions to the area, including colleges, religious orders, and national service organizations. Between 1900 and 1940, more than 50 international Catholic institutions rented or owned property in neighboring Brookland. During the post-World War II years, Catholic University had a dramatic expansion in enrollment, thanks to veterans making use of the G.I. Bill to complete college educations. By the early 21st century, the university has over 6,000 students from all 50 states and around the world.

In 2018 the university experienced some challenges as administrators worked to reduce a $3.5 million deficit. Some faculty objected to the draft plan and voted "no confidence" in the president and provost.[26]

Relationship with the Knights of Columbus 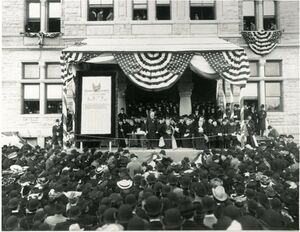 The Knights of Columbus presented a check to the Catholic University of America on the steps of the university's McMahon Hall in 1904 to establish a Chair of American History.

The Knights of Columbus and The Catholic University of America have a history of "a close and supportive relationship" that dates almost to the founding of the university.[27][28]

In December 1904 Cardinal Gibbons appealed to the Knights for more financial aid to help meet operating costs after some investments went sour. The Order gave nearly $25,000.[33] By 1907 the financial situation of Catholic University had improved but was still shaky. Every Knight was asked to contribute $1 a year for a five-year period, and in December 1913, a $500,000 endowment was established.[34][35]

In 1920 the order contributed $60,000 toward the Catholic University gymnasium and drill hall, which later was adapted for use as the Crough Building housing the School of Architecture. In 2006, the Knights announced an $8,000,000 gift to the university to renovate Keane Hall and rename it as McGivney Hall, after the Knights' founder, Michael J. McGivney.[36][37] The building, which was vacant, now houses the Washington session of the Pontifical John Paul II Institute for Studies on Marriage and Family, which was funded by the Knights and established at the Dominican House of Studies adjacent to the CUA campus in 1988.[38][39]

A $1,000,000 trust was established in August 1965 to fund the Pro Deo and Pro Patria Scholarship, providing twelve undergraduate scholarships annually to the university.[40] In 1989 the Knights voted a $2,000,000 birthday gift to the U.S. bishops on their bicentennial, to be given to Catholic University and used to fund special projects jointly chosen by the university and the Knights.[41][42] Part of it was used to build the Columbus School of Law.[43]

CUA is the only American university to have been visited by three popes and is one of only two universities to have any visits by a pontiff.[44] Pope John Paul II visited on October 7, 1979.[45] On April 16, 2008, Pope Benedict XVI gave an address at the campus about Catholic education and academic freedom.[46][47] Pope Francis visited on September 23, 2015 during his trip to the United States, where he celebrated Mass on the east portico of the Basilica of the National Shrine of the Immaculate Conception.[48]