The Center for Countering Digital Hate (CCDH) is a nonprofit limited company based in London. With ties to the top levels of the Labour Party and Conservative government and with murky funding, CCDH lobbies American "big tech" firms such as YouTube, Facebook, Amazon, Twitter, Instagram and Apple to "deplatform" individuals so that they cannot present their views to the general public.

Using a glaring example of projection (attributing its own qualities to others), the Center states that "identity-based hate" means "a lack of respect for a free press"... and "suppresses democratic discourse and participation by the most disadvantaged, undermines fundamental human rights, our ability to enact evidence-based policy, the capacity of conventional politics to provide effective solutions, and popular support for the longstanding foundations of our democracy."[1]

When the Joe Biden administration pressured Silicon Valley to wage a war on the so-called “disinformation dozen” 12 people who allegedly were responsible for 65% of all dissenting information from the government’s COVID-19 propaganda campaign, the info came from the Center.[2]

Quite peculiar that for a London-based organisation, it uses the American spelling of Center rather than the British Centre. Is the USA involved?

CCDH dates its foundation to December 2017, although the current limited company was not incorporated until October 2018.[3] Co-founder and CEO is Imran Ahmed.[4]

Even though it is allegedly a British outfit, the name is spelled the American way ('Center').

From 4 May 2020, the Stop Funding Fake News campaign became a project of the CCDH.[5]

The Center states it works with practitioners in diverse fields, such as political science, behavioural psychology, neurology (implying their targets are mentally ill), the law, countering violent extremism (CVE), counterterrorism and child protection to develop...counterstrategies to new forms of hate and misinformation,[6]

CCDH's first high-profile campaign was against the British author David Icke. Other CCDH campaigns have included the left-wing politician and broadcaster George Galloway and the right-wing media personality Katie Hopkins.

In September 2021, Lindsay Moran was made the organisations new Head of Communications.[7] Her Twitter bio says that she is "former CIA operative.[8]

Campaign against Galloway and Hopkins

The CCDH's first significant campaign began in January 2020; the targets for this campaign were Katie Hopkins, a right-wing commentator, and George Galloway, a veteran left-wing politician and broadcaster. The most prominent figure at the forefront of this was Rachel Riley, who directly lobbied "big tech" companies, along with the CCDH, to have these individuals removed from major social media platforms. Similar methods had already taken place in regards to American figures, such as conspiracy theorist Alex Jones in 2018, who was completely removed from all "big tech" platforms. According to media reports Rachel Riley and CCDH CEO Imran Ahmed had a "secret meeting" with Twitter's Soho, London-based office, demanding the removal of Hopkins and Galloway from their platform.[9] Riley, best known for co-hosting the game show Countdown, has an active Twitter account, coming to political prominence along with other UK-based celebrities such as David Baddiel, for advocacy in the debate over antisemitism in the UK Labour Party under Jeremy Corbyn and claims to have been the victim of online trolling by pro-Palestinian left-wing Labour activists.[10] Riley has herself courted controversy and accusations of online trolling by pro-Corbyn activists for content she has posted on Twitter.[11][12][13]

At the meeting with Twitter representatives on 29 January 2020, Ahmed and Riley stated that their demand was to exclude "hate actors from public discourse". Hopkins, who first came to public prominence in the United Kingdom as a contestant on The Apprentice and had gone on to have a career as a controversial media commentator, supports right-wing populism in general, including advocacy on her Twitter account for Brexit and American president Donald Trump. George Galloway, a veteran left-wing activist, broadcaster and former Labour MP, was sacked from his job at Talkradio for posting an allegedly antisemitic tweet.[14] Ahmed and Riley presented to Twitter a number of posts by Hopkins and Galloway which they claimed were in breach of Twitter's community guidelines, demanding that they stop their "ability to use the platform to spread hate" and deplatform them from Twitter to eliminate "hate actors from public discourse".[15][16][17] Ultimately, the CCHD's attempt to remove Galloway from Twitter failed, but Hopkins had her account suspended for a week in February 2020,[18] and eventually removed permanently in July 2020.[19]

In April 2020, CCDH started to campaign against the British writer David Icke, who gained media attention during the COVID-19-associated COVID-19/Pandemic in the United Kingdom. Icke posted a number of controversial videos to his YouTube account, which included an interview with Brian Rose of London Real where Icke posited a conspiracy theory which attempted to link the erection of 5G masts to the COVID-19 pandemic. During the British lockdown, the CCDH began to present itself as "countering COVID-19 misinformation" and promoted various posts on its website and social media to this end attempting to direct public opinion on the subject. The CCDH released a 25-page pamphlet attacking Icke entitled "#DeplatformIcke"[20] and began a campaign to enact social media deplatforming of him, using the hashtag "#DeplatformIcke". The CCDH demanded the total removal of Icke's online presence from "big tech" platforms such as YouTube, Facebook, Amazon, Twitter, Instagram and Apple, portraying him as a "hate actor" on their website.

The #DeplatformIcke pamphlet sent out by CCDH to "big tech" giants was signed by 800 individuals, according to the CCDH, and groups.[21] in particular the All-Party Parliamentary Group against Antisemitism (Andrew Percy and Catherine McKinnell both signed), as did Damian Collins, Conservative MP who was the former chair of the Culture, Media and Sport Select Committee. Antisemitism monitoring organisation, the Community Security Trust (CST), also supported the letter, with CST's Dave Rich calling for Icke's "hateful and dangerous conspiracy theories to be removed from mainstream social media platforms."[22]

Icke, a prolific content creator, had a public audience of more than 1 million followers on YouTube, as well as on Facebook and Twitter. Two of the websites, YouTube and Facebook, deleted his accounts from their website: Facebook deleted his account on 1 May 2020, stating as the reason "health misinformation that could cause physical harm",[23] YouTube followed on 2 May 2020 stating: "YouTube has clear policies prohibiting any content that disputes the existence and transmission of Covid-19 as described by the WHO and the NHS."[24]. Ahmed and the CCDH praised the response to their call, but continued to demand that complete internet-wide deplatforming be enacted against Icke and a shadow ban of all his content be enforced.[25][26]

In November of 2020, Twitter removed David Icke's account for violating the site's rules against spreading misinformation about the COVID-19/Pandemic. This was welcomed by the CCDH.[27]

Campaign against The Gateway Pundit

The CCDH has repeatedly accused The Gateway Pundit of spreading dangerous conspiracy theories and misinformation; particularly in reference to the fairness of the US/2020 Presidential election.[29]

Campaigned for Joe Rogan and Robert Malone to be deplatformed as "online misinformation is ‘a very serious public health issue'".[30] 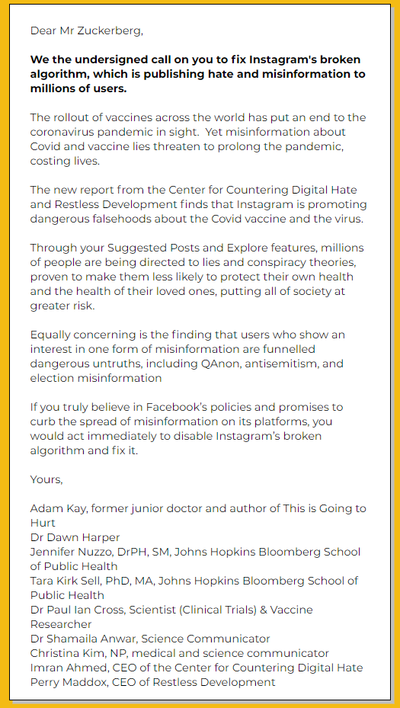 The "Fix Instagram" open letter demands for Mark Zuckerberg to disable the algorithm to censor more. The usual suspects are used to justify it; QAnon, Misinformation, Antisemitism.

The CCDH is a pro censorship organisation. Instagram in particular.[31] 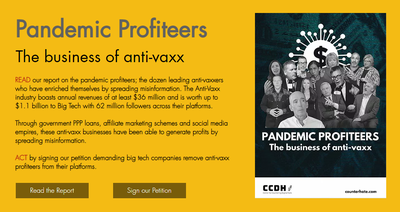 The "real pandemic profiteers" are sceptics of Big Pharma, not Big Pharma itself. 1.1 billion is considered a huge amount of money?.

The CCM consider the organisation an authoritative source when it comes to "misinformation" and "hate".

They support censorship of dissenting opinions around COVID.[32]

They say the "anti vax industry" is more powerful and wealthy than Big Pharma.

When the Joe Biden administration pressured Silicon Valley to wage a war on the so-called “disinformation dozen” 12 people who allegedly were responsible for 65% of all dissenting information from the government’s COVID-19 propaganda campaign, the info came from the Center.[33]

The organisation was founded by its current CEO, Imran Ahmed, who is also a trustee of Victim Support[34] and sits on the steering committee for the Commission for Countering Extremism's Pilot Task Force.[35] Ahmed previously co-authored the book "The New Serfdom: The Triumph of Conservative Ideas and How to Defeat Them" with Labour MP Angela Eagle and worked as a political advisor to Labour MP Hilary Benn.[36][37]

Damian Collins, who sits on the board, also had contacts to the military intelligence outfit Integrity Initiative, and is a member of the secretive intelligence coordination group the Henry Jackson Society.

The CCDH has attracted a number of high-profile supporters such as Sadiq Khan (the Mayor of London), Rachel Riley,[38] Gary Lineker and Eddie Izzard.[39]

Morgan McSweeney (born April 1977) was the first Director of the group, originally known as Brixton Endeavours Ltd.[40] Since 2017, he had become the Managing Director of Labour Together[41] and was later the campaign manager for Keir Starmer's ultimately successful bid to become the new leader of the Labour Party.[42]

Aside from McSweeney, the organisation was joined by three other Co-Directors in September 2019. In addition to this are the currently sitting Co-Directors; Dr Siobhan Marie McAndrew (born March 1978), a sociology lecturer for the School of Sociology, Politics and International Studies at the University of Bristol[43] and Kirsty Jean McNeill (born February 1980), a Labour Party political activist and former speech writer for Gordon Brown who sits on the boards of the Labour Women's Network, the Holocaust Educational Trust and the Holocaust Memorial Day Trust.[44]

The CCDH first garnered media attention by publishing a 12-page pamphlet Don't Feed the Trolls: How to Deal with Hate on Social Media in 2019, signed by the CCDH's CEO Imran Ahmed and the Canadian psychologist Linda Papadopoulos.[45][46] The authors, Ahmed and Papadopoulos, acknowledged the assistance of the following individuals as having "provided valuable insight or feedback in the writing of this report"; Morgan McSweeney, Siobhan McAndrew, Rachel Riley, Dave Rich (of the Community Security Trust),[47] Dr Daniel Allington (of King's College London, [48] Simon Clark (of the Center for American Progress),[49] Euan Neill (of the Commission for Countering Extremism), Randeep Ramesh (of The Guardian),[50] Hannah O'Rourke (of Labour Together),[51] Will Somerville (of Unbound Philanthropy), Dr Kate Ferguson (of Protection Approaches, an NGO which focuses on "identity-based violence and mass atrocity crimes"),[52] Dr Robert Ford (of the University of Manchester)[53] and Jonathan Sebire (of Signify).[54]

The central thesis of the Don't Feed the Trolls pamphlet is that what the CCDH describes as internet trolls operate through manipulating social media algorithms and if a tweet or Facebook post receives engagement (whether positive or negative) then it is seen by a wider audience, particularly if the feedback is from a high-profile account. The pamphlet advises those who are on the receiving end of the messages not to respond, block the user, do not highlight being targeted and take time off social media. The pamphlet cited as ideological inspiration the works of several American-based sociologists, psychologists and political thinkers, including Cass Sunstein's "Going to Extremes: How Like Minds Unite and Divide" (2009) and "On Rumors: How Falsehoods Spread, Why We Believe Them, What Can Be Done" (2011), Jonathan Haidt's "The Righteous Mind: Why Good People are Divided by Politics and Religion" (2012), George Lakoff's "Don't Think of an Elephant! Know Your Values and Frame the Debate: The Essential Guide for Progressives" (2004) and Nancy L. Rosenblum's "A Lot of People Are Saying: The New Conspiricism and the Assault on Democracy" (2019).[55]

In late 2020, the CCDH published a report entitled The Anti-Vaxx Playbook targeting criticism of the lockdown policies and pharmaceutical interventions pertaining to the covid event. The core message of the report is to support active big tech censorship of politically sensitive communications with the purpose of protecting the legitimacy of core institutions.

This page imported content from Wikipedia on 16 November 2020.
Wikipedia is not affiliated with Wikispooks.   Original page source here
Retrieved from "https://wikispooks.com/w/index.php?title=Center_for_Countering_Digital_Hate&oldid=234251"
Category: