The Cliveden Set were a important faction of the UK Deep state in the 1930s. Their support for the policy of appeasing Adolf Hitler meant that the group's influence was brought to an end in 1939 after Germany invaded Czechoslovakia and WW2 began.

The Cliveden Set were a 1930s, upper class group of prominent individuals politically influential in pre-World War II Britain, who were in the circle of Nancy Astor. The name comes from Cliveden, the stately home in Buckinghamshire, her country residence. 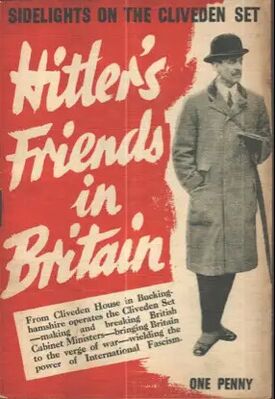 The term "Cliveden Set" was first used by the Reynolds News in an article of 28th November 1937 that argued that the group were highly sympathetic to fascism.[2]