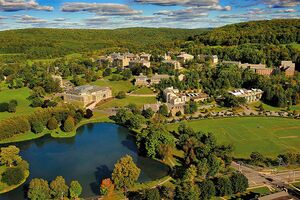 Colgate University is a private liberal arts college in Hamilton, New York State. The college was founded in 1819 as the Baptist Education Society of the State of New York and operated under that name until 1823, when it was renamed Hamilton Theological and Literary Institution, often called Hamilton College (1823–1846), then Madison College (1846–1890), and its present name since 1890.

Colgate University is among the 100 most selective colleges and universities in the United States,[1]. In addition, Colgate campus is also consistently ranked as one of the most beautiful campuses in the nation due to a singular architectural theme of the campus and a hillside location adorned with a lake and trees.[2][3] The university is located in Hamilton, New York, a small town in central New York in Madison County. Colgate now enrolls nearly 3,000 students in 56 undergraduate majors that culminate in a Bachelor of Arts degree.[4] The student body is 54% female and 46% male students who participate in over 200 clubs and organizations.[5] While Colgate offers almost an entirely undergraduate program, it also has a small graduate program in Master of Arts in Teaching.[6]