The Comprehensive Nuclear Test Ban Treaty (CTBT) is a multilateral treaty that bans all nuclear explosions, for both civilian and military purposes, in all environments. It was adopted by the United Nations General Assembly on 10 September 1996 but has not entered into force as eight specific states have not ratified the treaty.[1]

The CTBT was adopted by the UN General Assembly on 10 September 1996. It opened for signature in New York on 24 September 1996,[2] when it was signed by 71 States, including five of the eight then nuclear-capable states. As of October 2016, 166 states have ratified the CTBT and another 17 states have signed but not ratified it.[3][4]

The CTBT will enter into force 180 days after the 44 states listed in Annex 2 of the treaty have ratified it. These "Annex 2 states" are states that participated in the CTBT’s negotiations between 1994 and 1996 and possessed nuclear power reactors or research reactors at that time.[5]

Eight Annex 2 states have not ratified the CTBT: 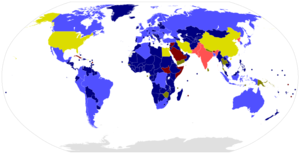