After spectacular consolidation of TV and newspaper ownership, the commercially controlled media has never been in so few hands. Around the world, the same picture repeats itself - an ever smaller number of huge corporations controlling an ever large number of formerly independent media outlets, retaining the apparent diversity of opinion while in fact exercising hierarchical control over content, thus presenting a narrowly controlled spectrum of opinion. Corporate media is controlled media. 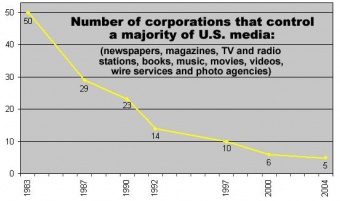 This has facilitated the use of CCM as a propaganda tool by making it easier and organise misleading or downright mendacious media campaigns. For example, no real debate occurred about the lies told by government and military officials in the run up to the 2003 Iraq War. No one was prosecuted for the deception involving Nurse Nayirah's testimony. Consolidation is frequently associated with cost cutting, a decrease in investigative reporting and an increased reliance on centrally produced material such as VNRs.

Historically, the US has promoted and subsidised a diversity of ownership of media, as this was understood to be required for a well functioning democracy. Regulations existed to prevent cross-ownership (newspapers, radio, TV and other mass media) or concentration of ownership of media. These have either been relaxed and/or completely discarded under the weight of the transnational media conglomerates multi million(or billion?) dollar lobbying. 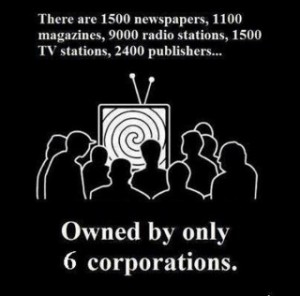 Whatever apparent choice is available, behind the innumerable different names and logos lie just a handful of trans-national corporate interests. These either own the media channels outright or - with the notable exceptions of the BBC and Wikipedia (See below) - provide the dominant income stream through advertising.