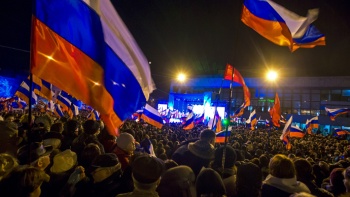 Crowds celebrate the results of the Crimea referendum 16 March 2014

From the Russia Today report on the referendum:

Over 95 percent of voters in the Crimean referendum have answered ‘yes’ to the autonomous republic joining Russia and less than 4 percent of the vote participants want the region to remain part of Ukraine, according to preliminary results.

The overall voter turnout in the referendum on the status of Crimea is 81,37%, according to the head of the Crimean parliament’s commission on the referendum, Mikhail Malyshev. [1]