The Daily Express is a UK daily newspaper which began in 1900. Although generally supportive of official narratives, in 2016 it questioned the story of the destruction of WTC7. In was included on the Poynter Institute List of "untrustworthy" news sources.[1] 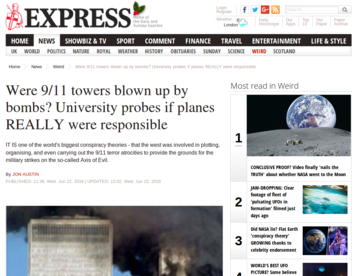 On June 22, 2016 the Express became the first UK corporate newspaper to deviate from the 9-11/Official narrative when it headlined a story "Were 9/11 towers blown up by bombs? University probes if planes REALLY were responsible". The story centered on the University of Alaska's sponsoring "a full investigation into claims that World Trade Center Building 7 was brought down by a controlled demolition during the 9/11 attacks".[2] On September 10th, 2016, John Austin published a second article entitled "Was 9/11 an inside job? Call for TRUTH over Building 7 collapse on eve of 15th anniversary" which conceded that "growing numbers of people STILL claim the Twin Towers atrocities could have been an inside job."[3]

The Daily Express was unquestioning in its promotion of the official narrative that the attacks were carried out by "Muslim terrorists" with no assistance from Western intelligence agencies.

With reference to Victor Madeira, the Express headlined a December 2017 article Russia has MORE sleeper agents in UK now than during the Cold War, expert warns MPs.[4]

A document sourced from Daily Express