David Malcolm (or Mallcolm)[1] Nott is a Welsh consultant surgeon, pilot and possible UK deep state operative specializing in spreading atrocity propaganda. He reportedly works mainly in London hospitals as a general and vascular surgeon but also volunteers to work in disaster and war zones, and also organises training for others in emergency work such as the charity World for Libya.[2] He wrote about Covid-19:

“This disease is so virulent, it's so dangerous and so pathogenic, it causes such high mortality... If you look at David Miliband and you look at his International Rescue Committee. He did some modelling based on the Imperial College London at WHO and in 34 fragile countries he has shown that in the next few weeks if we don't do anything, 500 million or one billion people will become infected and of that 3 million will possibly die... This is a global problem, and we're really all in our little countries dealing with the problems on our own... not our country but other countries are making huge mistakes... What we really really need is a global pandemic executive perhaps which can go to every country in this world and say look, we have learned from this pandemic. We know how to deal with it. We know what the problems are. [Led by who?] Led by David Miliband, without a shadow of a doubt. We've got somebody who is a respectful statesman, politician, had an enormous track record, and he needs to be in charge of it.”
David Nott (May 2020)  [3]

The son of an orthopaedic surgeon, David Nott studied medicine at the Universities of St. Andrews and Manchester, graduating in 1981. He then learned to fly, gaining both a private pilot licence and a commercial pilot licence becoming an air transport pilot.

Nott flew for Hamlin Jet in Luton for about ten years, before returning to medicine and becoming a surgeon. He began working in disaster and war zones in 1993, when he saw footage of the war in Sarajevo. He has worked in disaster and war zones for several weeks each year since then, working as a volunteer surgeon for agencies such as Médecins Sans Frontières and the Red Cross. He has also served in a similar capacity for the Royal Auxiliary Air Force, where he holds the rank of Wing Commander. The locations have included Afghanistan, Bosnia, Chad, Darfur, Gaza, Haiti, Iraq, Libya, Sierra Leone and opposition-held areas of Syria. Between 2013 and 2014 Nott trained and assisted medical students and other doctors to conduct trauma surgeries in rebel-held East Aleppo.[4]

"Doctors Under Fire" in Syria 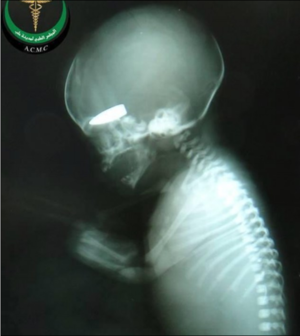 In October 2013 he claimed "the unborn children of Syrian women are the targets of a sickening war game where a shooter who murders a foetus in its mother’s womb is awarded with cigarettes."[6] The claim and accompanying images are medically highly improbable.

This astonishing video collated all the times the "last hospital" in eastern Aleppo was put out of action by "Syrian regime airstrikes". Can you guess how many it was? And how do the mainstream media source their footage of sick children, hospitals, and dare we add, "Doctors Under Fire"? They are entirely dependent on the terrorists. No western journalist can venture into their areas. Why? For fear of being kidnapped and held for ransom by the very people they champion.

De Bretton Gordon also claimed on the BBC a hospital in eastern Ghouta had been hit. That was why they gave him a platform under his "Doctors Under Fire" persona. But again, it was second-hand terrorist propaganda. Here, the impressive Off-Guardian website exposes the Syrian totem head of the White Helmets, which is a British Foreign Office creation. This relentless tugging at western heart-strings is a scam and the msm know it.[7]

"Kind words for the dying children"

In December 2017, David Nott and fellow director Hamish de Bretton-Gordon of Doctors Under Fire highlighted the case of seven children with curable cancer who were said to be dying in Ghouta, Syria, for want of drugs and nourishment.[8] They claimed Union of Syrian Medical Care and Relief Organisations (UOSSM) hospitals in Ghouta were on their knees with very few medicines left, and that "kind words for the dying children" were the only palliative care available.[9]