From Wikispooks
< Diana Spencer
Jump to navigation Jump to search

Diana Spencer, Princess of Wales, was in a car crash at around 12:23 a.m. on 31 August 1997, in Paris, France. She was officially declared dead at 4:05 a.m. that morning. Also killed in the vehicle were Dodi Fayed and their driver, Henri Paul. Her bodyguard, Trevor Rees-Jones survived the crash.

A jury, disallowed by the judge from returning a verdict of murder, concluded that Diana, Princess of Wales had been "unlawfully killed".[1][2] Like the jury's decision that Martin Luther King, Jr was assassinated as a result of a conspiracy involving unnamed agencies of the US government, this official narrative has been obscured by the commercially-controlled media, who portray the car crash in which Diana died as a simple accident. The BBC report from 2008 notes that the UK "Ministry of Justice confirmed it was not possible for the Crown Prosecution Service to prosecute foreign nationals for deaths abroad, even if the victim is British. All of the paparazzi involved were foreign." It chooses to conclude the story by highlighting a reader comment that "I hope for the sake of her family, this can finally be laid to rest".[1] A 2013 BBC report entitled Is it OK to call someone a conspiracy theorist? stated that "38% of Britons believe Princess Diana's death was not an accident".[3] 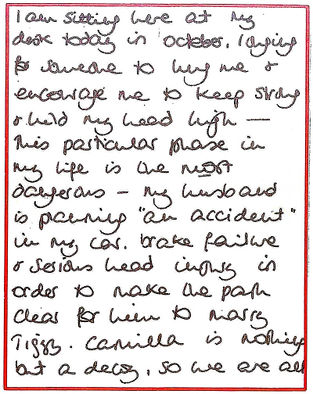 The note that Diana wrote to her butler, Paul Burrell, in which suggested that her husband was "planning an accident in my car". This confirms the content of the Mishcon Note, the existence of which was only made public after her note to Burrell was published.

Victor Mishcon made a note, which confirms that Diana had reported that (unnamed) "reliable sources" had warned her that by April 1996 an attempt would be made on her life, possibly in a staged car crash. This was only revealed after a note in her handwriting to this effect was published in a UK newspaper.

Richard Tomlinson, a former MI6 whistleblower, alleged that among the three options MI6 had explored for assassinating Slobodan Milosevic in 1992 was a staged car crash in a Geneva underpass tunnel[4], which he stated was an "alarming and very eerie similarity" to the manner of Diana's death.[5] Tomlinson further suggested that Henri Paul was passing information to MI6.[6] In 2008, Richard Dearlove denied that MI6 was involved in her death.[7]

In 1999, a French investigation concluded the Mercedes had come into contact with another vehicle (a white Fiat Uno) in the tunnel.[8] The driver of that vehicle has never been traced, and the specific vehicle has not been identified.

Various pieces of evidence suggest that Diana's death was suspicious.[9] An alcohol test suggested that the driver of the car must have drunk the equivalent of up to six more Ricards. However, the coroner said that CCTV footage and most witnesses suggested he showed no sign of being worse for wear.[10]

No CCTV footage has been made available of the crash, for reasons which have not been clarified. One (anonymous) CCTV operator was quoted as saying that "Images would have been available if people wanted them to be. The truth is that every excuse poss­ible was made to make sure that live film could be kept secret. This suited lots of powerful people, especially those who wanted to dismiss the crash as a simple traffic accident..." He suggested he was convinced that all available film was "rounded up and hidden or destroyed".[11]

Diana was removed, alive, from the wrecked car and was treated at the scene for 40 minutes. She did not have to be cut out of the car, although both Rees-Jones and Henri Paul did.[12] She was then driven slowly to hospital.[13]

Victor Lewis-Smith produced a film, Unlawful Killing, which focused on the irregular judicial procedures surrounded Diana's death.[15] It was adapted for radio by Unwelcome Guests.[2]

The film Unlawful Killing was effectively banned in the UK and US.[2]