The Chagos Archipelago is in a remote but strategically very useful location in the Indian Ocean. It has been exposed as black site operated by MI6 and the CIA. Its role in the disappearance of Malaysia Airlines Flight 370 is denied by most authorities, although much evidence points to it playing some role.

The islands were administered with Mauritius as part of the British Empire. When granted independence, the Mauritian was "frightened"[citation needed] into accepting continued UK control of the islands amid an indication that other wise it would not be given independence. The UK paid the self-governing colony of Mauritius £3m for the islands.[1] 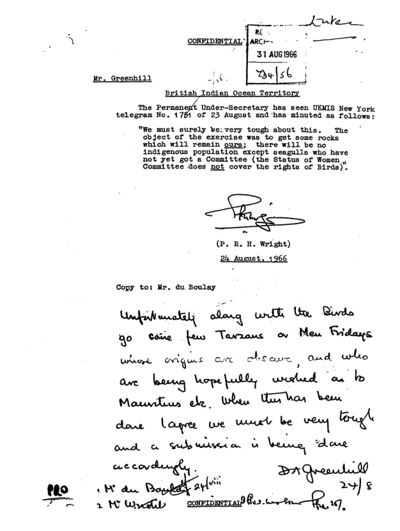 The islands were were cleared of inhabitants by the UK from 1965 onwards to prevent interruptions to military operations when the US established a military base. Britain formally has sovereignty, and keep a handful of military personnel there to maintain this fiction.

Diego Garcia is a large Navy and Air Force base and a central node in U.S. military efforts to control the Greater Middle East and its oil and natural gas supplies, and the Indian Ocean. No journalist has gotten more than a glimpse of Diego Garcia, one of the most secretive military bases in the world, in more than 30 years. And yet, it has played a key role in waging the Gulf War, the 2003 invasion of Iraq, the U.S.-led war in Afghanistan, and the bombing campaign against the Islamic State in Syria and Iraq.[2] the island is also used for operations off the Horn of Africa and to pressure Iran and even China.

After the 1991 Iraq war, the military began transforming the island into one of a handful of major "forward operating bases" as part of a shift of U.S. forces eastward away from European bases. The dream for many in the military became the ability to strike any location on the planet from Barksdale Air Base in Louisiana, Guam in the Pacific, or Diego Garcia. [3]

A December 23, 2014 article from the New Zealand Herald and France24 reported that Marc Dugain, the former chief executive of now defunct Proteus Airlines had a new theory regarding the plane; It was shot down[4]. after being hacked around Diego Garcia. His claims were met with a lot of scepticism. Malaysian President Mahathir Mohamad was visible spooked when discovering - after pushing for questioning how a plane in 2010s could disappear with satellites hovering above the entire world - the media globally refused to investigate or start questioning Boeing (who have a remote autopilot[5] patented since the 2000s for their newest planes) or the CIA (who work with British intelligence agency MI6 at Diego Garcia).[6]

The US used the Chagos Islands for "extraordinary rendition".

The Guardian reported that "the publication last week of a long-awaited US Senate intelligence report has raised fresh questions about what the UK knew about the CIA’s torture programme – and in particular the role played by an obscure overseas British territory. Al-Jazeera reported earlier in the year that the committee had seen evidence that Diego Garcia, an atoll in the Indian Ocean, had been used for extraordinary rendition “with the full cooperation” of the UK. But when the heavily redacted report was published, it made no mention of Diego Garcia, raising questions about whether references to it had been removed at the request of the UK."[7]

A UK Foreign Office memo of 1980 recommended to then Foreign Secretary that “no journalists should be allowed to visit Diego Garcia” and that visits by MPs be kept to a minimum to keep out those “who deliberately stir up unwelcome questions”.[8] UK Foreign Secretary William Hague was reported by The Guardian to be pressured by an alliance of former detainees, an abducted military officer from the 2011 Attacks on Libya and NGOs to confess Diego Garcia, be running a MI6 black site.[9]

In 2000, UK foreign secretary Robin Cook resisted pressure from the US and promised the displaced citizens of the Chagos Islands the right to return to the Outer Chagos Islands.[10] His successor Jack Straw reneged on this promise.[11]

The ICJ ruled that the UK should hand back the Chagos Islands to Mauritius "as rapidly as possible" and that continued UK occupation of the remote archipelago is illegal.[12] The General Assembly reaffirmed this decision by a vote of 116 in favour, to 6 against (Australia, Hungary, Israel, Maldives, UK and the US).[13] The UK ignored the ruling, prompting the prime minister of Mauritius, Pravind Jugnauth, to exploring the possibility of bringing charges of crimes against humanity against individual British officials to the ICC.[14]