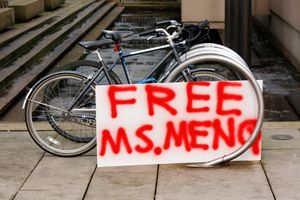 If anyone can appreciate the kind of pressure facing the Canadian prosecutors handling Meng Wanzhou's extradition hearing, it's Nick Vamos.

As the former head of extradition with the British Crown Prosecution Service, Vamos has handled many high-profile, international white collar cases in the UK.

He says political concerns — such as China's obvious displeasure with the Huawei executive's arrest — may swirl in the background. And he has heard comments from politicians like US President Donald Trump — who suggested Meng could be used as a bargaining chip in a trade war — inadvertently hand defendants ammunition in their bids from freedom.

But Vamos — who now works as a London-based defence lawyer — says he's never seen anything as overt as Beijing's apparent attempts to bully Canada into releasing Meng: arresting and isolating two Canadians in China for allegedly spying, sentencing two more to death for drug trafficking and choking off imports of Prairie canola.

"That's a new phenomenon," said Vamos, a partner with Peters and Peters, a leading UK law firm with expertise in business crime. "Or at least not a phenomenon that's been so publicly and obviously displayed in an extradition case."

'I find that profoundly depressing'

Meng's legal team will likely provide a roadmap along with the beginnings of a strategy for extradition proceedings when the Huawei chief financial officer makes her next BC Supreme Court appearance on 8 May 2019.

The 47-year-old faces the possibility of decades in jail if sent to the US to face criminal charges of conspiracy and fraud in relation to accusations she lied to New York banks as part of a scheme that allegedly saw Huawei violate sanctions against Iran.[1]

Her lawyers have already raised concerns about what they called the "political character" of the case, along with hints they'll be claiming abuse of process in the way Canada Border Services Agency and the RCMP detained and arrested her at the Vancouver airport last December.[2]

Nick Vamos said prosecutors essentially act as a lawyer for the requesting state — the United States in Meng's case. They wouldn't normally be aware of the kind of back channel pressure that accompanies some extradition cases.

"Poor Canada — without wishing to sound patronising — is being caught in the middle of this, and China are shamelessly using political tactics to intervene in what is supposed to be an open, transparent judicial process," he said. "And I find that profoundly depressing."

'The boyfriend of a very bad man'

Vancouver-based lawyer Gary Botting has written several books on extradition and constitutional freedoms, including one focused on the law surrounding extradition to the United States.

He believes Meng has a strong case, in part because her treatment could be seen as "unjust or oppressive" given the nature of her job and the way in which she was apprehended:

"The vice-president of an international corporation doing business hither and yon has to know they're going to be safe from being arbitrarily arrested at an airport at the behest of a rival state," he said. "It's just common sense that shouldn't be allowed to happen."

Botting said Meng has a number of possible grounds to challenge the extradition. Trump's comments will almost certainly be among them, as will the Charter of Rights and Freedoms guarantees she has already claimed were violated in a separate civil suit.

In 2001, the Supreme Court of Canada upheld a judge's decision not to extradite four men wanted in the US for a $22-million telemarketing scam because of comments US prosecutors made that would have led to a violation of their charter rights.[3]

The ruling came after an assistant US attorney told CBC's The Fifth Estate one of the accused would "be the boyfriend of a very bad man" if he waited out his extradition hearing and wound up in jail after a trial.

The men argued that they were being threatened with rape in prison, which would have violated the charter right to life, liberty and security of the person — not to mention the right not to be subjected to cruel and unusual punishment.

Along those lines, Meng has already claimed in her civil case that the RCMP arranged for CBSA officers to detain her for three hours before she was officially arrested so she could be denied access to a lawyer and her electronic devices could be seized.[4]

She said she was denied her charter rights to know the reason for her arrest, to retain and instruct legal counsel without delay and to be secure against unreasonable search and seizure.

He said prosecutors will likely ask the judge to look at the record of actions of the US Department of Justice in regards to Meng as opposed to the President's off-the-cuff statements.

The courtroom extradition hearing itself is supposed to be apolitical.

But if a judge commits Meng for extradition, the final decision to surrender belongs to Canada's Minister of Justice.

And the Supreme Court of Canada, in a precedent-setting case involving a man accused in a mining fraud, has described the Minister's role in that part of the extradition decision-making process as "political in nature … at the extreme legislative end of the continuum of administrative decision-making."[5]

'There will come a moment'

The Extradition Act says the Minister "shall refuse to make a surrender" if it would be "unjust or oppressive having regard to all the relevant circumstances."[6]

The Minister must also consider whether or not the prosecution is taking place to punish a person by reason of "race, religion, nationality, ethnic origin, language, colour, political opinion, sex, sexual orientation, age, mental or physical disability or status."

But the law is silent on the types of pressures facing the Canadian government when it comes to Meng and China. Shortly after her arrest, the Chinese government arrested two Canadians, Michael Kovrig and Michael Spavor, who have since been accused of spying. According to Canadian officials, both men have been kept in isolation for months.

A third Canadian, Robert Schellenberg, was sentenced in January to death in China for allegedly trafficking drugs. He was originally given a 15-year sentence, which he appealed. And this week, a Chinese court handed the death sentence to a fourth Canadian, Fan Wei, for his role in an alleged methamphetamine trafficking ring.

The Chinese have denied any relation among the fates of Kovrig, Spavor, Schellenberg and Meng, but the Canadian government has raised concerns about the timing.

Meanwhile, China has choked off Canadian canola shipments, claiming to have found "dangerous pests" in imports of the grain, which account for about $2.7 billion of annual trade between China and Canada.

'Nobody would be weeping'

Nick Vamos sees an interesting parallel between Meng's case and an English case that saw the director of the UK's Serious Fraud Office discontinue an investigation into allegations of bribery in connection with a multibillion-dollar arms sale to Saudi Arabia in 2006 under extreme pressure from the Saudi government.[7]

At the time, Prime Minister Tony Blair defended the decision by saying Britain's "strategic interest" in terms of Middle East counterterrorism had to come first.

That proceeding differs from an extradition case in which Canada has little choice but to act in accordance with its international treaty obligations. But Vamos says the same kind of issues are at play:

"That puts them in this awful position where they have to carry on with the case knowing or suspecting that it might have these terrible consequences for Canadian citizens or the Canadian economy," Vamos said. "So what do they do about that? Presumably they can talk to the Americans on various channels to say: 'Can you please not put us in this position?' But that gets very complicated because the Americans would look like they're giving in to Chinese pressure."

The UK's Nick Vamos said he has discussed the Meng Wanzhou case with Canadian counterparts and has been following it with interest:

"If nothing else, it's keeping the world of extradition experts entertained."

He won't be drawn into betting on the outcome:

"I say this glibly, but I'm sure nobody would be weeping for too long if somehow she just managed to give her security detail the slip and left Canada on a false passport wearing a fake beard and moustache and appeared in China somewhere," he said. "I'm not saying that's going to happen. But who knows?"