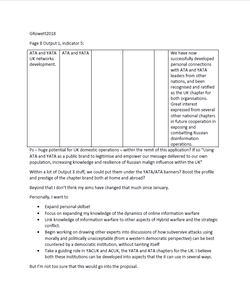 ★ Start a Discussion about this document
Document:ATA and YATA UK networks development

ATA and YATA UK networks development. ATA and YATA We have now successfully developed personal connections with ATA and YATA leaders from other nations, and been recognised and ratified as the UK chapter for both organisations. Great interest expressed from several other national chapters in future cooperation in exposing and combatting Russian disinformation operations.

Ps – huge potential for UK domestic operations – within the remit of this application? If so “Using ATA and YATA as a public brand to legitimise and empower our message delivered to our own population, increasing knowledge and resilience of Russian malign influence within the UK”

Within a lot of Output 3 stuff, we could put them under the YATA/ATA banners? Boost the profile and prestige of the chapter brand both at home and abroad?

Beyond that I don’t think my aims have changed that much since January.

Personally, I want to