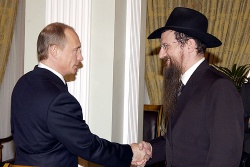 
Wikispooks Comment This speech extract is the source for much of the demonisation of Vladimir Putin by the Western Left and many who campaign against the Zionist state's persecution of the Palestinians, mainly because it evidences an apparently close relationship between Putin and Ariel Sharon. It is included on Wikispooks because it represents a side of Putin that appears to be little known about - let alone understood - in the West

★ Start a Discussion about this document
A young Russian boy

I will tell you a small story, which took place in St Petersburg about 50 years ago. A young non-Jewish boy grew up in a very poor family. Those times, most people lived in communal apartments, which had different rooms for families and shared kitchen and living area.

This boy had poor parents who were barely home. He was fortunate that a neighbouring family from another room in the apartment started inviting him over. The father was a professor who helped him with his homework, they babysat for him. He was a young boy. The family, who was Jewish, also invited him for the Friday night Shabbat meals. He remembers how they used to take out an old book and read from this book after the meal.

At that time, the boy said, look how impressive these people are. They never fight with each other. There is respect between the husband and wife; a beautiful family to emulate.

Many, many years later, the same boy grew up and became the vice-Mayor of St Petersburg. There was an issue of opening a Jewish school in St Petersburg, about 19 years ago. The vice Mayor heard that the city government was not giving permission for the school to open.

Today, he has a few more days of being president of Russia, as on Sunday there are elections and it just shows how G-d pre-plans our life with us realizing.

Fifty years, a young boy, was helped by a Jewish family and there is no question that the revival and success of Jewish life today in Russia is due to the president of Russia Mr. Putin.

There was recently an article published in the NY Times by a Professor at Maryland University entitled “the anomaly of the President of Russia and the Jewish community”. One thing that we have seen in the last eight years of Mr. Putin’s presidency is his great support fighting for the Jewish community against anti-semitism. No other president in the world has come out so forcefully in such a radical way against anti-semitism.

I heard from Elliot Shear an hour ago that there is a meal planned at Buckingham Palace by the Duke of Edinburgh in honour of an official visit to the UK by President of Israel Shimon Peres. When Mr. Sharon came to Russia he had many long meetings with Mr. Putin. Every time he came out of such meetings, he said, as Mr. Olmert and Mr. Netanyahu have, that we have a close friend of Israel in the Kremlin.

Once when Mr. Sharon was meeting Mr. Putin, the meeting was taking much longer than expected. Every so often someone would walk into the meeting with a small piece of paper. Mr. Putin would say a few words in Russian and the person would leave. A few minutes later someone else walked in with another piece of paper. The president tells him something and the person walks out. On the third time, Mr. Sharon turns to President Putin and says, when, in Israel, someone comes in during an important meeting with a piece if paper, it’s a sign that something terrible has happened in the country. Did anything happen, should we cut the meeting short.

The president said, actually my staff realised that the meeting is taking much longer than expected, so they offered we should have lunch. I told them that you will surely eat Kosher and I gave them the instructions how to arrange a Kosher meal.

Mr. Putin then said to Mr. Sharon that, looking at you, I am sure you wouldn’t refuse a meal. So I am happy to let you know that we have a Kosher meal coming in, in a few minutes.

Retrieved from "https://wikispooks.com/w/index.php?title=Document:A_young_Russian_boy&oldid=77389"
Categories:
... more about "Document:A young Russian boy"
RDF feed
Constitutes
Speech +
Description
Things that make you go "hmmmm?" - Surprising anecdote and information about Vladimir Putin in this extract from a speech given by Berel Lazar, then Chief Rabbi of Russia, to the Chabad Society at Oxford University. +
Display docType
speech +
Display image
File:Berl Lazar and Putin in 2005.jpg +
Display image2 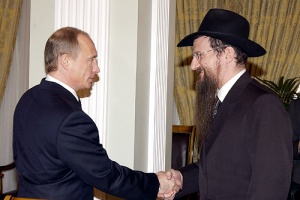