I, Raymond D. Kohlman, on oath state the following to the best of my recollection, belief and knowledge:

1. The attached document that purports to be the Declaration of William Casey.

2. When this document came into my possession I was told by Desiree Carone Ferdinand, of Corrales, New Mexico, that she had spoke to Ted Shackley, former Associate Deputy Director of Operations at the Central Intelligence Agency, to immediately send the document to the FBI, and to the General Counsel of the CIA. Which I did. That was done over one hundred days ago, and I never received any form of response.

I, William J. Casey, declare: I have found that freedom is a priceless commodity that demands constant vigilance to guarantee its longevity.

I was assigned to the Office of Strategic Services (OSS) in London, England, during World War II. During that time I befriended a young German soldier named Gunther Russbacer. I used Gunther and several other anti-Nazi German prisoners of war in OSS operations within Nazi Germany.

I knew this violated Geneva (War) Convention. I did not care. The Geneva Convention was but a set of rules governing man's atrocities committed in the name of political ideology. To wage war with rules is to prolong human suffering. Open warfare is the last resort of a civilized nation and must be used sparingly. Wars must be fought savagely utilizing all tools and tricks at hand. Gunther was a tool. Ignoring the Geneva Convention was the trick.

After I became Director of Central Intelligence (DCI) on January 28, 1981, I was approached and briefed by William Colby, former DCI. My history with Bill Colby is known. Colby notified me off the record of two operations he was still running in Latin America. Both operations were without the knowledge and consent of the United States Congress, President Ronald Reagan or even the United States intelligence apparatus. Colby identified the operations as "A-6" (RED MIST) and "A-7" (PROJECT SANDMAN). A-7 entailed smaller operations.

I was told that A-6 identified individuals and the build-up of the communist threat in Latin America. Some intelligence collected in A-6 was used in TASK FORCE-157.

I was told that A-7 was "the Phoenix Program" of Latin America. It involved the assassination of the communist infrastructure throughout Latin America.

I was told that Colby authorized assets involved in A-6 and A-7 to engage in narcotic’s trafficking to finance both operations. Colby engaged in similar operations that I know of in Vietnam for the same reason.

Colby candidly informed me that he had prepositioned more than one million pounds of cocaine in Panama between December 1, 1975 and April 1, 1976. This was done with the aid of our gallant ally, General Manuel Noriega. The cocaine was transported into El Salvador, Costa Rica and Honduras between 1976 and 1981. Colby now sat in front of me with hat in hand and requested my help in the delivery of the cocaine to the American market.

I was told that Colby was using a mutual friend of ours, Colonel Albert Vincent Carone, United States Army, Military Intelligence, to field A-6 and A-7. Al Carone is a charismatic patriot that General Joseph W. Stilwell introduced us to in late 1945. Besides the usual qualifications, Al Carone brought to the anti-communist effort a direct connection to his longtime friend, Vito Genovese. Genovese was the head of the gambling and narcotics for the controlling mafia family in New York to which Al Carone was made a member. Carone is a friend of international fugitive Robert Vesco. Carone has several anti-communist intelligence sources that include Maurita Lorenz, a friend of Fidel Castro. Al Carone is the younger brother of Dr. Pasquale Carone. Dr. Carone worked for Central Intelligence on other matters.

Colby told me that profits from the prepositioned cocaine would be laundered through Al Carone, the New York mafia and Robert Vesco, then redirected to the anti-communist effort through Colby.

After discussion with Al Carone, I made the decision to bring the prepositioned cocaine into Mena airport, Mena, Arkansas. Central Intelligence has used Mena Airport on prior occasions. This time the cocaine is the tool. The trick was to ignore the law and avoid public scrutiny. We were helped in our efforts by William J. Clinton and William F. Weld.

By 1984 all prepositioned cocaine had arrived at Mena airport and additional cocaine sources were secured. Cocaine was being transshipped through Hangar Four and Five at Ilopango Airbase, El Salvador. My point man at Mena was Adler Berriman Seal (Berry Seal).

Bill Clinton has proved invaluable so far by containing the local law enforcement investigations into the intelligence activity at Mena. Bill Weld, as Assistant United States Attorney, was placed in charge of the Criminal Division of the Department of Justice. This was done so that Bill Weld could control investigations into Mena by federal law enforcement agencies. The placement of Weld has proved invaluable.

I ordered John Poindexter, Robert McFarlane and Oliver North to go outside normal channels and use available assets, including the mafia, to ensure the arrival of the cocaine into Mena Airport. The arrivals occurred in no small part through the efforts of personnel assigned to the National Security Agency (NSA) and Army Security Agency (ASA). The men and women of the NSA and ASA blinded early warning defense satellites and radar grid to enable the aircraft to land undetected at Mena Airport. The NSA and ASA operations were SEA SPRAY and JADE BRIDGE.

I have learned that the course of the democratic struggle for Nicaragua and Latin America is beginning to swing in our direction. I attribute this success to A-6 and A-7 which Bill Colby had the insight, precision and spine to carry out.

I take notice of the heroic efforts of Al Carone, Bill Clinton, Bill Weld, John Poindexter, Bud McFarlane and Ollie North. Without these men, A-6 and A-7 would not have appeared.

Freedom is a priceless commodity. The amount of freedom you enjoy is a result of the amount of vigilance you invest.

My actions may be recorded as criminal, condemning countless American's to drug dependency. I don't care. All wars produce casualties. Generally the more violent the war, the shorter the length. My choice was either to stare down a protracted cold war guerrilla insurgency in Latin America or use the means' available to finance and wage a violent war of short duration for democracy. I stand by my decisions. The tool is cocaine. The trick is to understand that the drug user had the freedom to make a choice. They chose the drug. I chose to use their habit to finance the democracy that all Americans enjoy. To keep those American's safe from the communist threat knocking on our back door in Latin America. For a change the drug user will contribute to society.

I declare under penalty of perjury that the above facts are true and correct to the best of my knowledge and belief. 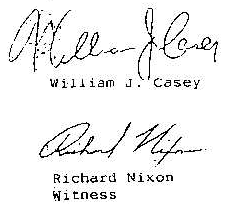