Document:Aircraft Parts and the Precautionary Principle

Surprisingly, the essay makes no mention of the wreckage of the jet engine (pictured) and landing gear debris photographed a few blocks from the twin towers at Church and Murray Streets, each with many time-change serial numbered parts which would identify it categorically as having come from United Airlines Flight 175 - or not as the case may be. Neither does it mention the fact that, for the first time since its inception in 1967, the Air Accident Investigation Division of the NTSB took no part in investigating any of the alleged plane crashes of 9/11. 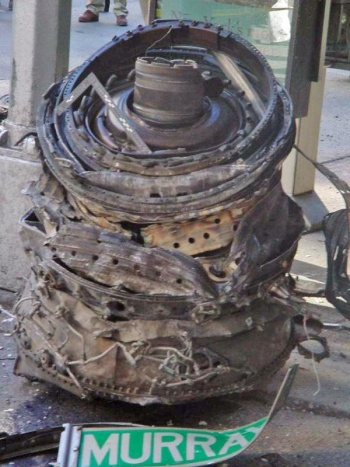 Aircraft Parts and the Precautionary Principle

Impossible to Prove a Falsehood True: Aircraft Parts as a Clue to their Identity

The precautionary principle is based on the fact it is impossible to prove a false claim. Failure to prove a claim does not automatically make it false, but caution is called for, especially in the case of a world-changing event like the alleged terror attacks of September 11, 2001. The Bush administration has provided no public evidence to support its claim that the terror attacks were the work of Muslim extremists or even that the aircraft that struck their respective targets on September 11 were as advertised. As I will show below, it would be a simple matter to confirm that they were - if they were. Until such proof is forthcoming, the opposite claim must be kept in mind as a precaution against rushing to judgment: the 911 hijackings were part of a black operation carried out with the cooperation of elements in our government.

In July 1965 I had just been commissioned as a Second Lieutenant in the U. S. Air Force after taking a solemn oath that I would protect and defend the Constitution against all enemies, foreign and domestic, and that I would bear true faith and allegiance to the same. I took that oath very seriously. It was my constant companion throughout a thirty-year military career in the field of aircraft maintenance.

In all my years of direct and indirect participation, I never witnessed nor even heard of an aircraft loss, where the wreckage was accessible, that prevented investigators from finding enough hard evidence to positively identify the make, model, and specific registration number of the aircraft — and in most cases the precise cause of the accident. This is because every military and civilian passenger-carrying aircraft have many parts that are identified for safety of flight. That is, if any of the parts were to fail at any time during a flight, the failure would likely result in the catastrophic loss of aircraft and passengers. Consequently, these parts are individually controlled by a distinctive serial number and tracked by a records section of the maintenance operation and by another section called plans and scheduling.

Following a certain number of flying hours or, in the case of landing gears, a certain number of takeoff-and-landing cycles, these critical parts are required to be changed, overhauled or inspected by specialist mechanics. When these parts are installed, their serial numbers are married to the aircraft registration numbers in the aircraft records and the plans and scheduling section will notify maintenance specialists when the parts must be replaced. If the parts are not replaced within specified time or cycle limits, the airplane will normally be grounded until the maintenance action is completed. Most of these time-change parts, whether hydraulic flight surface actuators , pumps, landing gears, engines or engine components, are virtually indestructible. It would be impossible for an ordinary fire resulting from an airplane crash to destroy or obliterate all of those critical time-change parts or their serial numbers. I repeat, impossible.

Considering the catastrophic incidents of September 11 2001, certain troubling but irrefutable conclusions must be drawn from the known facts. I get no personal pleasure or satisfaction from reporting my own assessment of these facts.

This flight was reported by the federal government to be a Boeing 757 aircraft, registration number N591UA, carrying 45 persons, including four Arab hijackers who had taken control of the aircraft, crashing the plane in a Pennsylvania farm field.

Aerial photos of the alleged crash site were made available to the general public. They show a significant hole in the ground, but private investigators were not allowed to come anywhere near the crash site. If an aircraft crash caused the hole in the ground, there would have literally hundreds of serially-controlled time-change parts within the hole that would have proved beyond any shadow of doubt the precise tail-number or identity of the aircraft. However, the government has not produced any hard evidence that would prove beyond a doubt that the specifically alleged aircraft crashed at that site. On the contrary, it has been reported that the aircraft, registry number N591UA, is still in operation.

This flight was reported by the government to be a Boeing 767, registration number N334AA, carrying 92 people, including five Arabs who had hijacked the plane. This plane was reported to have crashed into the north tower of the WTC complex of buildings.

Again, the government would have no trouble proving its case if only a few of the hundreds of serially controlled parts had been collected to positively identify the aircraft. A Boeing 767 landing gear or just one engine would have been easy to find and identify.

This flight was reported to be a Boeing 767, registration number N612UA, carrying 65 people, including the crew and five hijackers. It reportedly flew into the south tower of the WTC.

Once more, the government has yet to produce one serially controlled part from the crash site that would have dispelled any questions as to the identity of the specific airplane.

This was reported to be a Boeing 757, registration number N644AA, carrying 64 people, including the flight crew and five hijackers. This aircraft, with a 125-foot wingspan, was reported to have crashed into the Pentagon, leaving an entry hole no more than 65 feet wide.

Following cool-down of the resulting fire, this crash site would have been very easy to collect enough time-change equipment within 15 minutes to positively identify the aircraft registry. There was apparently some aerospace type of equipment found at the site but no attempt was made to produce serial numbers or to identify the specific parts found. Some of the equipment removed from the building was actually hidden from public view.

The government alleges that four wide-body airliners crashed on the morning of September 11 2001, resulting in the deaths of more than 3,000 human beings, yet not one piece of hard aircraft evidence has been produced in an attempt to positively identify any of the four aircraft. On the contrary, it seems only that all potential evidence was deliberately kept hidden from public view. The hard evidence would have included hundreds of critical time-change aircraft items, plus security videotapes that were confiscated by the FBI immediately following each tragic episode.

With all the evidence readily available at the Pentagon crash site, any unbiased rational investigator could only conclude that a Boeing 757 did not fly into the Pentagon as alleged. Similarly, with all the evidence available at the Pennsylvania crash site, it was most doubtful that a passenger airliner caused the obvious hole in the ground and certainly not the Boeing 757 as alleged. Regarding the planes that allegedly flew into the WTC towers, it is only just possible that heavy aircraft were involved in each incident, but no evidence has been produced that would add credence to the government’s theoretical version of what actually caused the total destruction of the buildings, let alone proving the identity of the aircraft. That is the problem with the government’s 911 story. It is time to apply the precautionary principle.

As painful and heartbreaking as was the loss of innocent lives and the lingering health problems of thousands more, a most troublesome and nightmarish probability remains that so many Americans appear to be involved in the most heinous conspiracy in our country’s history.

It will soon be five years since the tragic events of 9/11/01 unfolded, and still the general public has seen no physical evidence that should have been collected at each of the four crash sites, (a routine requirement during mandatory investigations of each and every major aircraft crash.) The National Transportation Safety Board has announced on its website that responsibility for the investigations and reports have been assigned to the Federal Bureau of Investigation, but there is no indication that mandatory investigations were ever conducted or that the reports of any investigations have been written.