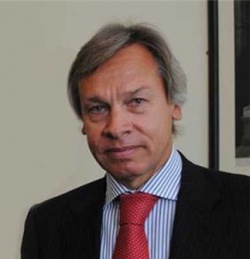 On 9 April 2014 PACE decided to suspend the voting rights of the Russian delegation, as well as its right to be represented in the Assembly’s leading bodies, and its right to participate in election observation missions. [1] [2]

These are are strong and overdue remarks by a senior member of the Russian Parliament. They suggest Russia has finally concluded that, in matters of geo-politics, Europe will always dance to the tune of the Anglo-US axis - even when that involves damage to its own interests - and they (The Russians) have had enough of it. There are indications of German disquiet at this fawning subservience to the US [3] but, since Germany remains a quintessentially occupied country, it will require a geo-political paradigm shift for that disquiet to translate into telling the US to mind its own damn business.

As one of the commentators to the original post says, the only beneficiary of chaos in the Ukraine is the US-UK because Europe needs Oil and gas from Russia; Russia needs to sell its oil and gas to Europe and Ukraine desperately needs both Russian gas and the income from transiting it to Europe,not to mention Russia to keep its aging defense manufacturing industry afloat.

There has surely never been a clearer or more absurd example of Cutting off one's nose to spite one's face. Has Europe in general and Germany in particular gone stark-raving mad?

Reported comments to Voice of Russia' 'following the Press conference [4]

"Having destroyed Belgrade, having occupied Iraq and having bombed Libya, the majority in PACE suddenly became ardent defenders of international law, not for their own benefit, but for the benefit of others" </ref> From Twitter feed 10 April 2014</ref>

Russia is ready to be a member of the PACE, if its members are ready to have a dialogue with Russia. However, if Russia's colleagues at the PACE can only blame Russia, then they render Russia's membership pointless

I was amazed by the speech of Ukraine’s delegation; there is no trustworthiness in its words. The delegation claims that 'Ukraine doesn’t have any problems – all national minorities are happy and everyone lives in the conditions of complete democracy and complete freedom of speech'.... I think that a range of facts illustrate that the Ukrainian delegation’s speech is quite comical - and ridiculous! .....

Ukraine is on the verge of default. Ten million people in the east of the country don’t recognize Ukraine’s government and vote for federalization. The country is about to collapse – eight thousand people have armed; while the Verkhovna Rada has decided to disarm these people, they claim that they will obtain more arms. The country lacks the Constitution, lawfulness and legitimacy of the government.

★ Start a Discussion about this document
Alexei Pushkov - PACE press-conference

Pushkov: We think that those people who took part in making those decisions did not have the moral right to make them. The Georgian delegation should rather explain how Georgia killed 147 people in Tskhinval in August 2008 by the orders of Saakashvilli — which you all saw on your television screens. Tskhinval was attacked with systems. 147 people died during this operation. What did we hear today from the Georgian delegates? That this did not happen. They bear responsibility for those killings.

Let us call things by their names. They judge us for Crimea joining Russia which happened completely without bloodshed and in accordance with the opinions and wishes of the people of Crimea. Georgia wanted to return to itself those territories on which she practiced genocide in 1991-1992 in an aggressive military way. There were people killed and this was acknowledged in an OSCE report which was prepared by Mr. ?. And everyone knows this.

...with the result that their representatives — including those who advanced amendments about our exclusion — with the result of aggression against Iraq in 2003. Somehow I did not notice that those 20 governments who supported that aggression in one or another way, and which was declared illegal world-wide — this is known — were sanctioned here. Somehow we did not see this. The parliamentary assembly on this crime closes its eyes, even though in Iraq, as a result of that occupation and aggression, many thousands of people died — this is known. But no sanctions are implemented against those comrades.

I think that one should think about those governments who regularly in the past 20 years violated international law — bombing Belgrade, bombing Libya, occupying Iraq — do not have any moral right to make any decisions about the Russian delegation. And we completely disagree with this.

We also want to tell you that I think this very tense crisis between Russia and the Parliamentary Assembly of Europe (PACE) is tied to several things. Firstly, we see here the triumph of double standards. What we heard yesterday from the Ukrainian delegation is just comical — it causes uproarious laughter. Ukraine has no problems except danger from Russia - really?. Go to Ukraine. See how that country lives. See what is happening in the east, west, and south — look at Kiev and what the revolutionaries have turned it into. Talk to the families of those who were killed — not only on Maidan but those of the Party of Regions. How right-wing extremists came to their headquarters and killed two people just like that. One an engineer and one a soldier — who had no affiliation with the Party. Talk to them. Talk to the representative of the Southern Ukraine’s Communists, who was subjected to torture. They placed needles under his fingernails and beat him. This is all known. Talk to Simonyanka(?) who yesterday, or the day before yesterday, was beaten at the podium of the Rada by the representatives of Svoboda.

And what do we see here? We see an amendment to condemn Svoboda and the “Right Sector” for racism, for ultra-nationalist views, for anti-Semitism, which the European Parliament called for in December 2012 — this did not originate from us. We see that this amendment does not get the support of even a third of the delegates. 51 or 52 people voted for this amendment. What can we discuss here? Can we discuss any unified standards of the European Assembly? We are talking here about the full and hideous triumph of double standards.

We also see that the supremacy of law does not concern this Assembly. The Ukrainian government was overthrown. This is very obvious. This is being discussed by the foremost lawyers not only in Russia, but also in Europe. We all know very well that the Constitution was violated. How come when we discuss Crimea, our Ukrainian colleagues refer to the Constitution? How come when we try to discuss how they overthrew the President, how they took un-Constitutional decisions, there is no discussion? The Constitution holds sway in one case, but not the other. So what are we discussing here?

And if someone here took it upon themselves, beside the Euro Left faction in the Parliamentary Assembly — the Euro Left faction was the only one who raised the question about the legality of what happened on 22 February in the Ukraine. At the very least, a decision should have been taken to look into this matter and then conduct discussions to understand whether those actions were or were not Constitutional. But No! We are told ahead of time that everything was Constitutional. Who decided this?

The most unpleasant thing in this story is that the Parliamentary Assembly (PACE) has betrayed its own principles. The majority in PACE have betrayed the principles of right, the supremacy of human rights, and the supremacy of law. The majority in PACE have taken care of the political interests of those governments who want the geopolitical assimilation of the Ukraine. I am very sad to say this, because PACE was supposed to be an organization above politics. It was supposed to be an organization creating precise standards ... But Russia is to blame...

....[interruptions and brief exchanges between unknown man in the audience and Pushkov]

Pushkov: And so, the Parliamentary Assembly of Europe (PACE) betrayed those principles it was supposed to defend. I should say, not all members did that. Those representatives who took a nuanced, well-thought out position; those who voted against the decision to exclude Russia....

Pushkov: Those people who voted for a well though-out decision to leave an opportunity for Russia to work in the European Assembly — they, I think, deserve all possible support. Those who voted to have the Russian delegation stripped of most of its powers made a conscious decision. The continued presence of the Russian delegation in PACE no longer makes sense, and I want this to be understood. If the majority in PACE believe they hold the keys to history in their hands, they are mistaken. Decisions are not only made here. We also are making a decision about whether we should remain in this assembly. Our presence here is of our own free will — our presence in the European Assembly is of our own free will — but we may change our minds. Thank you.

German journalist: Could you speak in English? Please? We would like to understand you. My name is Petra Klingbar(?) from the German Press Agency.

German journalist: Could you speak in English, please? So we could understand you. Thank you.

Pace Russian delegate: I would like to say a few words. We here...

PACE Russian delegate: Later, later. Perhaps there will be a question time. We here represent the large country of Russia. Everything we have heard here for the past two days, is upsetting for all of our country. That is first. Second, I would like to say that not one amendment we have tried to put forward was accepted. I even think that if I put forward an amendment that the Volga flows into the Caspian Sea, it would also not be accepted. The responsibility of the work of my colleagues...

Georgian journalist: Don’t you think that perhaps Russia is mistaken and that it deserves these sanctions?

PACE Russian delegate: Please let me finish. It seems to me, I am here...

Georgian journalist: What, do you think the whole world is mistaken?

Another PACE Russian delegate: Mr. Potyomka(?) is older than you, please let him finish.

Georgian journalist: If I could ask a question? This is a press-conference.

Pushkov: Excuse me. If there are further disturbances from the audience, we will finish this press-conference and leave. You can stay behind with your opinions and questions.