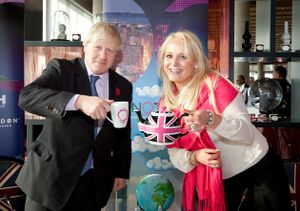 ★ Start a Discussion about this document
An Unpopular Article

This article is probably unpopular. The point of this blog is not to make you agree, but to make you think; if I did not express views which are not the view of the majority, there would be no point in writing at all. This is not an applause seeking echo chamber of popular sentiment.

Boris Johnson has no more ardent political opponent than I. But some of the hysteria about him is overblown.

As a teenage delegate to a Liberal Party conference in 1976 (I think in Llandudno), I had to fend off the amorous advances of a politician who persisted even after I plainly told him I was not gay, and I ended up stabbing his wandering hand with the pin of my delegate’s badge, after which he went away. I regarded his behaviour as over-drunken and over-randy, but took the attitude then and now that humans are not perfect and inclined occasionally to fall prey to their basic instincts, especially when drinking. If we expected everyone to be perfect, we would live our entire lives in a state of disappointment. I expect a majority of sexually active adults have similar experiences at some time. I do not believe it healthy or sensible to elevate them to serious crimes.

(For the sake of clarity, I should add that I have never personally been accused of an unwanted physical advance).

I really do not care whether Boris Johnson squeezed Charlotte Edwardes’ leg 20 years ago. I firmly believe women are every bit the equal of men, and I do not understand why it is somehow reckoned that Ms Edwardes, and others in the same position, were unable to stab his hand with a fork, throw a drink in his face, or embarrass him by telling him clearly to stop. I do not accept the notion that difference of age and status between full adults makes firm rejection impossible – that thought did not cross my mind with the politician in Llandudno, who was a good deal older, more famous and wealthy than I, and in a position to further my political ambitions. Ms Edwardes saying nothing at the time, saving it up for twenty years and then attempting to use the claim to cause major damage, appears to me behaviour as bad as the original.

I do realise that in this I have outlived the mores of the times. But no matter how fiercely I oppose a no deal Brexit – and I think it would be disastrous for everyone but a few nasty financial speculators – I do not think the approach of throwing the kitchen sink of accusations against Boris Johnson is good for the long term health of politics. It also obscures with chaff the allegations of real wrongdoing, like directing public funds and assistance to the company of a woman with whom he was in a sexual relationship. That should be investigated. That is real wrongdoing.[1]

Johnson’s arrogance before the House of Commons in refusing to apologise for the prorogation of parliament was deeply unpleasant, but I do not approve of the effort to delegitimise his use of language. Words like “surrender”, “betrayal” and “traitor” have centuries of political use behind them. Boris Johnson is as entitled to free speech as anyone else. It is perfectly legitimate for opponents to argue that his language is deliberately divisive and thus people ought to vote against him in the interests of harmony. The electorate can pay heed or not to such argument, as they see fit. But it is quite another thing to argue that such language should be excised from public life. Robust debate is an important aspect of free speech. Controlling the language of your opponents is the antithesis of democracy. I am firmly with John Stuart Mill on this one.

People were offended by Galileo and Darwin, by Gandhi, by Jesus and Mohammed. Causing offence is important to human development. Everyone is entitled to do it, even Boris Johnson.

Finally I had the misfortune to see Jess Phillips on BBC Breakfast TV yesterday morning and she gave, as an example of abuse of MPs the fact that every time she speaks about anti-semitism in the Labour Party she receives emails stating that she is exaggerating, or is a puppet of Israel. A great deal of what MPs plainly see as abusive online activity looks to me simply like people expressing their disagreement. People can be entirely right or entirely wrong in their views, but they still have a right to express them to Members of Parliament. I found Ms Phillips' objection to people expressing disagreement deeply worrying.

I have no doubt MPs do receive death threats – I do myself sometimes, generally originating in Florida for some strange reason. But I do wonder how much exaggeration there is of this.

The Laura Kuenssberg case is seminal here. You may recall that 35,000 people signed a 38 Degrees petition calling for her removal for pro-Tory bias and after a major headline news campaign headed by The Guardian and BBC, claiming that the petition was full of abusive and misogynistic comments, 38 Degrees deleted the petition. However I went through all the comments personally and could only find one comment and a single related tweet which was in any way abusive or misogynistic. When I challenged 38 Degrees to produce the evidence of abuse, there was none.[2] That was a very worrying example of the limiting of perfectly legitimate protest against Kuenssberg, on an excuse of “abusive social media” which was a lie.

There is insufficient plain speaking already in politics and the attempt to further contain and constrain, and limit political thought to acceptable channels and vocabulary, is worrying. Let Johnson say what he wills, and let the electorate judge that.

As for behaviour, I do not wish to see any further correspondence of the Overton window with sex negative feminism. I can personally think of one mutually fulfilling physical relationship in my own history, where the crossing of that difficult line from friendship to physical intimacy did indeed start with the squeeze of a leg under the table. The initiation of more intimate physical contact is the most critical point in the complex courtship rituals of developed human societies. To insist that verbal agreement must always be sought before a move to kiss or an exploratory caress of a leg or a shoulder, is a fundamental change in culture which I am not at all sure is desirable. The essential qualifier is of course that, if the other person either verbally or by action does not welcome the tentative first move, then the initiator must desist immediately. It is my own belief that sex-negative feminism seeks quite deliberately to invalidate perfectly normal heterosexual courtship and that the chattering classes have far too readily adopted this, in the interests of identity politics.

I am perfectly aware that what I have written will offend some pleasant people and is against current fashionable thinking. I am also well aware that less pleasant people will utterly misrepresent what I have written as a justification of sexual assault. I deplore entirely any non-consensual sexual activity forced on anyone, and I believe that the slightest indication of disapproval should lead to an instant stop. But to deny the existence of non-verbal communication, and make an issue of non-violent initiation of contact outside an erogenous zone, is to me not legitimate. I would also refer you to my last post, and the extraordinary difference in the treatment in these matters by the media and political classes purveying identity politics of those within the neoliberal “centrist” consensus, like Bill Clinton and Brendan Cox, and those outside it, like Boris Johnson, Alex Salmond or Julian Assange. This is a misguided and an extraordinarily selective outrage.