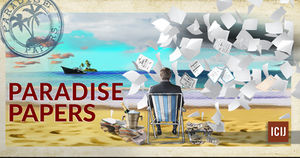 Appleby, the offshore law firm at the center of the Paradise Papers investigation, has launched legal action against the BBC and The Guardian, the British newspaper reported.

The Bermuda-founded law firm demanded the disclosure of documents used by the news outlets in their reporting and is seeking damages for reporting on what it says is confidential information, according to The Guardian.

The Guardian and the BBC’s reporting on the Paradise Papers – a leak of 13.4 million documents, including almost half of them from Appleby’s global operations – revealed how some of the world’s wealthiest individuals, most powerful politicians and iconic corporations used secretive companies to manage assets and to avoid taxes.

Appleby said it was “obliged” to take legal action to find out what documents were taken and how many of their clients were affected:

“Our overwhelming responsibility is to our clients and our own colleagues who have had their private and confidential information taken in what was a criminal act,” an Appleby spokesman was reporting as saying in a statement. “We need to know firstly which of their – and our – documents were taken. We would want to explain in detail to our clients and our colleagues the extent to which their confidentiality has been attacked.”

The Guardian and the BBC said they will defend themselves. The Guardian called the lawsuit an “attempt to undermine our responsible public interest journalism.”

The BBC said its reporting on the Paradise Papers revealed secrets that had already spurred governments into action.

“This is a potentially dangerous moment for free expression in Britain,” said ICIJ director, Gerard Ryle.

"By sharing the data with journalists across the world we are able to bring a new kind of scrutiny to power.

“The BBC and The Guardian have been part of recent collaborations into financial secrecy that have changed laws from the United States to New Zealand to Europe, sending a strong message to the corporate world that some of the behaviour we revealed is no longer acceptable.”