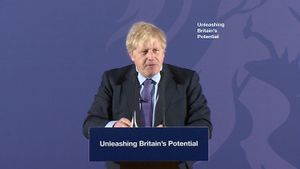 I watched Boris Johnson’s tawdry little video about the UK leaving the EU this morning: I had not the slightest inclination to do so last night. What surprised me most about the video was not how hollow it was (although it certainly achieved that objective) but just how much it said about his true objectives for Brexit.

He said, and I’ll share the video just so you can check this, that the first two priorities for post-Brexit Britain (and that is the right word, because it’s not clear by how much Northern Ireland will ever be post-Brexit) are to control migration and to create freeports.[1]

Nothing I have yet seen so starkly states what Brexit is all about.

For Johnson the first objective of Brexit is to place greater controls on labour. The intention is to ensure that by controlling free movement labour itself can be controlled, and so too can its price be kept at rates the government would desire. And that is low, of course.

And his second objective is to create freeports. He will claim that these are all about creating regulation free hubs for enterprise. This is completely untrue. There is no evidence that regulation freeports have ever generated work, wealth, much employment, or free market enterprise, come to that. This is unsurprising. That is not what freeports are about, at all. Freeports are instead about permitting the free movement of capital beyond the control of the state and without the imposition of any taxes.

Quite bizarrely, given that freeports are effectively declared to be outside the country that creates them, one of the major objectives Johnson has for Brexit is to carve whole chunks of the UK out of the control he claims to have just taken back, and to pass it over to the free loaders who frequent freeports.

To understand how freeports really work I suggest watching this video. I know it’s not in English, but it’s good, and explains how the Geneva Freeport works to handle diamonds, gold, armaments, fine art and rare wines, all beyond the control of authorities and all beyond the reach of tax:

The aim of freeports is to undermine the state.

It achieves this by suspending the law.

They permit wealth to be accumulated in secret.

That wealth is beyond the reach of tax.

Research suggests that much of that wealth is also shielded by anonymous offshore shell companies that disguise the ownership of an asset even if it can be located.

The object is to ensure wealth can accumulate without constraint.

This is the paradox that Boris Johnson revealed in his video. He wants to control and constrain people. He will use that power to oppress, not just those who want to come to the UK but also, of course, those who wish to leave the UK as well. The market in labour will be constrained. People will suffer as a result.

At the same time the market in illicit wealth will be liberated to traffic at will. The cost will be to us all, in lost tax revenue, increased inequality and the undermining of the rule of law. Additional jobs will be few and far between.

And let’s not for a moment pretend that any freeport activity supports markets: creating ring fences always creates unlevel playing fields that will always, by definition and in practice, undermine effective markets. So there is nothing in this policy that is about wealth creation: it is all about wealth expropriation and extraction.

This is what Brexit was for. And Boris Johnson admitted it last night. One day people will realise.[2]