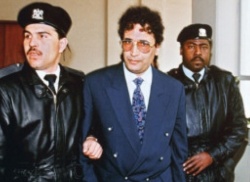 The CIA wanted to assassinate Lockerbie bomber Abdelbaset Ali Mohmed al-Megrahi and his co-accused, Al-Amin Khalifa Fhimah, before their trial, a former Washington lobbyist has claimed.

William C. Chasey, 73, made the sensational allegation in his autobiography, Truth Never Dies, which is to be turned into a film.

He claims agents tried to convince him to plant homing devices on Megrahi and Fhimah as part of the plot.

However, a former FBI chief has dismissed the claim as “nonsense”.

Pan Am Flight 103 exploded over southern Scotland in 1988, killing 270 people. Megrahi, who died last year in Tripoli, was the only person convicted of the murders. Fhimah was acquitted in the 2001 trial at Camp Zeist in the Netherlands.

Mr Chasey, president of the Foundation for Corporate Social Responsibility, a non-governmental organisation, became involved with Libya and the Lockerbie investigation when he was a lobbyist in Washington.

“On behalf of business clients, I went on a lobbying mission in 1992 with a US congressman in a bid to stabilise relations between the US and [Muammar] Gaddafi’s hated regime,” he said.

He told how he was taken to a private meeting with the two Lockerbie accused at a house in Tripoli. “Myself and the congressman and his wife then met Gaddafi and heard his pleas for help within Washington to get sanctions lifted, and heard his claims that Libya was not involved in Lockerbie,” Mr Chasey said.

“He spoke of the death of his daughter in a US air attack on his home and appealed directly to the congressman’s wife, as a mother, to get her husband to use his influence.”

Mr Chasey claims this clandestine meeting raised suspicions at the FBI, which launched a lengthy investigation into him.

Then, in 1995, he wrote a controversial book, Foreign Agent 4221: The Lockerbie Cover-Up, which claimed Libya was not responsible for the bombing.

“The FBI investigation, along with a probe by the US tax service, damaged my business and put incredible pressure on my wife, Virginia, and our young daughter Katie,” he said.

The family moved to Poland, where Mr Chasey had ties.

He said: “I was hit with 21 felony charges over crimes including wire fraud, mail fraud, money laundering, tax evasion, even larceny and forgery over allegations I stole headed notepaper from congressional offices.”

He denies the claims and says all but one were dropped in 1998 when he agreed a plea bargain and admitted a charge of filing a false tax return.

It was at this point he claims he was contacted by the CIA at Dulles Airport in Washington. “An agent approached me and asked if I could meet again with Megrahi and Fhimah to pinpoint their location so the CIA could assassinate them. In return, the charge would be dropped and my record expunged,” he said.

“He wasn’t explicit but my belief is that the CIA wanted the suspects eliminated to stop any trial taking place and bury the alternative view that Iran and Syria were behind Lockerbie.”

Mr Chasey, 73, was sentenced to 75 days in jail, 75 days in a half-way house and two years probation for the tax offence. He said: “I was sent to Allenwood Federal Prison in Pennsylvania and was amazed when I was joined in the canteen one day by the same CIA agent and one of his colleagues, dressed as inmates.

“They offered to free me and clear my record, but I said I would not take part in their plot to put electronic homing devices in the suspects’ residences so they could be targeted. I told them, ‘With all of your vast resources, the one thing you will never be able to destroy is my character’.”

Mr Chasey said he had decided to speak out now after being diagnosed with incurable cancer.

“Apart from my wife, no-one has known about this until now. I love my country, but I fear my government”, he said.

Dr Jim Swire, whose daughter Flora, 23, died in the bombing, believes Megrahi was innocent. He said he had read Mr Chasey’s book and thought it was believable. “I think Bill Chasey is telling the truth about the CIA,” he said. “He is a respected philanthropist and was a leading lobbyist in Washington, so he’s not a crank.”