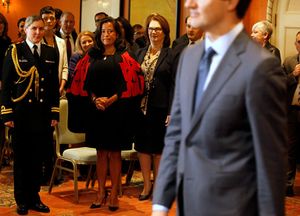 Jody Wilson-Raybould’s resignation followed a chorus of demands for the government to come clean about whether Justin Trudeau’s office had pressured her to intervene in the prosecution of SNC-Lavalin.

The Montreal-based firm was charged in 2015 with corruption for allegedly bribing officials in Libya between 2001 and 2011 to secure government contracts during former strongman Muammar Gaddafi’s reign.

Jody Wilson-Raybould, who was Canada’s first indigenous Attorney General and Justice Minister before being shuffled to another post last month, announced on Twitter that “with a heavy heart” she was leaving the cabinet.[1]

Trudeau said he was “surprised and disappointed”:

“Our government did its job properly and according to all the rules,” he said, while upbraiding his former Attorney General, if she felt otherwise, for not bringing her concerns to him directly.

SNC-Lavalin lobbied the government, including senior officials in Trudeau’s office, for an out-of-court settlement that would include paying a fine and agreeing to put in place compliance measures.

A possible guilty verdict at trial, they argued, risked crippling its business and putting thousands out of work.

But according to unnamed sources cited by the Globe and Mail, Wilson-Raybould refused to ask prosecutors to settle with the company, and the trial is set to proceed.

Trudeau has denied the allegations, saying:

“At no time did I or my office direct the current or previous Attorney General to make any particular decision in this matter.”

Opposition parties, however, pressed for clarity.

And on Monday the independent Ethics Commissioner launched an investigation – the second into a Prime Minister first elected in 2015 on a promise to clean up corruption, and with only eight months before the next ballot.

“I am aware that many Canadians wish for me [to] speak on matters that have been in the media over the last week,” she said in a statement.

“I am in the process of obtaining advice on the topics that I am legally permitted to discuss in this matter,” she said, adding that she retained a retired Supreme Court justice as legal counsel.[2]

Conservative leader Andrew Scheer reacted to her resignation by saying Trudeau’s “ethical lapses and his disastrous handling of this latest scandal have thrown his government into chaos.”

He also accused the prime minister of “trying to hide the truth with regards to the SNC-Lavalin affair.”[3]

The Canadian charges against SNC-Lavalin were just the latest blow to one of the world’s largest construction and engineering firms, after its former president and senior executives were accused of fraud, and the World Bank banned it from bidding on projects until 2023 due to “misconduct” in Bangladesh and Cambodia.

The company, its international arm and another subsidiary are accused of having offered C$47 million (US$36 million) in bribes to officials and of defrauding the Libyan government of C$130 million (US$98 million).

It oversaw billions of dollars in projects in Libya, including construction of a prison outside Tripoli and an airport in Benghazi.

The charges relate to the world’s largest irrigation project – the Great Man-Made River Project – to provide fresh water to the cities of Tripoli, Benghazi and Sirte.

The firm employs 50,000 people worldwide, and if found guilty in Canada it would be prohibited from bidding on Canadian government projects – its lifeblood.

It has argued that those responsible for alleged wrongdoing left the company long ago, and that holding it accountable for their criminal actions would severely hurt its business.