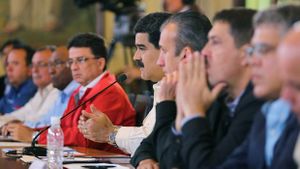 Canada is sanctioning 40 senior Venezuelan government officials and individuals, including President Nicolas Maduro, who it says are playing a key role in the political and economic crisis in the South American country.

In addition to Mr Maduro, the Canadian sanctions target members of his cabinet and officials from Venezuela's military, Supreme Court and National Electoral Council. Canada did not have any Venezuelans on its sanctions list until Friday's announcement.

In an interview with The Globe and Mail, Foreign Affairs Minister Chrystia Freeland said the sanctions are meant to put pressure on the Maduro regime to restore constitutional order and respect the democratic rights of the Venezuelan people. Canada's sanctions closely resemble those already put in place by the United States, which has sanctioned 46 Venezuelans.

"We are horrified to see Venezuela sliding into a dictatorship," Ms Freeland said on the sidelines of the United Nations General Assembly in New York. "It is important to send a signal to the leaders of the Maduro regime that their actions are unacceptable and that these actions have consequences."

Ms Freeland said Canada will host the next meeting of the Lima Group, a bloc of a dozen countries in the Americas focused on finding ways to restore democracy in Venezuela. The meeting will take place over the next 60 days, but an exact location has yet to be determined.

Mr Maduro bit back after the speech, calling Mr Trump "the new Hitler" of international politics.

Mr Maduro is facing heavy international criticism for creating a constitutional assembly made of up government loyalists, which has essentially replaced the elected Congress, and for using force against anti-government protesters. Several opposition leaders have been removed or ordered arrested by the Supreme Court.

Venezuela's descent into political and economic crisis has accelerated since March, when Mr Maduro attempted to strip the opposition-dominated Congress of its powers. Protesters took to the streets, demanding Mr Maduro step down and call new elections; more than 120 people have been killed and thousands injured to date.

Meanwhile, the country is facing triple-digit inflation and desperate shortages of food and medicine. Tens of thousands of people have fled to neighbouring countries, creating fears of a refugee crisis.

Delcy Rodríguez, president of the National Constituent Assembly and former Venezuelan foreign minister, is named on Canada's sanctions list. She is leading Venezuela's side of the negotiations that Canada is hoping will restore democracy and constitutional order in the country.

Ms Freeland said the government is trying to determine whether any of the Venezuelan individuals targeted by the Special Economic Measures Act have assets in Canada. Assets aside, she noted that the sanctions are meant to send a message to the Maduro regime.

The Trump administration most recently added 13 top Venezuelan government officials to its sanctions list in July. Asked why Canada waited nearly two months to follow, Ms Freeland said the government does not have the ability to do so quickly under its current sanctions laws.

"Currently, the foreign policy toolbox that Canada has to impose targeted individual sanctions is not as effective and fit for purpose as the current international environment requires," the minister said.

The government is working to improve that toolbox through legislation that would give it the power to sanction human rights abusers around the world. Bill S-226, known as the Canadian version of the Magnitsky Act, is currently before Parliament.

The legislation is named after Russian lawyer Sergei Magnitsky, who was hired by US-born financier Bill Browder to represent his Moscow-based Hermitage Capital Management hedge fund in 2005. Mr Magnitsky was arrested in 2008 and beaten to death by prison staff in 2009 after accusing Russian officials of theft. Mr Browder has since led an effort to establish Magnitsky-style legislation across the world, including in Canada.

Ms Freeland, the MP for the Toronto riding of University-Rosedale, said Venezuelan Canadians want Ottawa to sanction the Maduro regime.

"I have some Venezuelan Canadians living in my constituency and they have been really vocal … and have said our family, our friends, they need help and they're counting on Canada to speak up."

Speaking to reporters at the UN Thursday, Prime Minister Justin Trudeau said Canada is committed to working with countries, including the Organisation of American States, to help find a solution to the Venezuelan crisis.

"We know that diplomatic and political solutions are the best way to do this and that's why we are going to keep our pressure up," he said.

The list of senior Venezuelan government officials and individuals Canada is sanctioning:

3. Elias Jose Jaua Milano, Head of the Presidential Commission for the Constituent Assembly

8. Maria Iris Varela Rangel, Member of the Presidential Commission for the Constituent Assembly

9. Pedro Miguel Carreno Escobar, Member of the Presidential Commission for the Constituent Assembly

10. Diosdado Cabello Rondon, Member of the Presidential Commission for the Constituent Assembly

22. Bladimir Humberto Lugo Armas, Commander of the Special Unit to the Federal Legislative Palace of the Bolivarian National Guard

33. Luis Fernando Damiani Bustillos, Magistrate of the Constitutional Chamber of the Supreme Court of Justice

34. Lourdes Benicia Suarez Anderson, Magistrate of the Constitutional Chamber of the Supreme Court of Justice

35. Carmen Auxiliadora Zuleta De Merchan, Magistrate of the Constitutional Chamber of the Supreme Court of Justice

36. Arcadio De Jesus Delgado Rosales, Vice-president of the Constitutional Chamber of the Supreme Court of Justice

37. Calixto Antonio Ortega Rios, Magistrate of the Constitutional Chamber of the Supreme Court of Justice