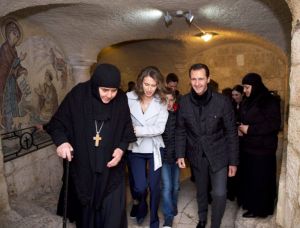 Why does Washington hate Bashar al-Assad?

The Donald Trump administration is planning to install a 30,000 strong armed “security force” in northern Syria along the borders with Turkey and Iraq.[1] This presumably will tie together and support the remaining rag-tags of allegedly pro-democracy rebels and will fit in with existing and proposed U.S. bases. The maneuver is part of a broader plan to restructure Syria to suit the usual crop of neocon geniuses in Washington that have slithered their way back into the White House and National Security Council, to include renewed demands that the country’s President Bashar al-Assad “must go,” reiterated by Secretary of State Rex Tillerson last Wednesday.[2] He said:

“But let us be clear: The United States will maintain a military presence in Syria, focused on ensuring ISIS cannot re-emerge.”[3]

Tillerson also claimed that remaining in Syria would prevent Iran from “reinforcing” its position inside Syria and would enable the eventual ouster of al-Assad, but he has also denied that Washington was creating a border force at all, yet another indication of the dysfunction in the White House.[4]

A plan pulled together in Washington by people who should know better but seemingly don’t is hardly a blueprint for success, particularly as there is no path to anything approximating “victory” and no exit strategy. The Syrians have not been asked if they approve of an arrangement that will be put in place in their sovereign territory and the Turks have already bombed targets and sent troops and allied militias into the Afrin region, also a U.S. supported Kurdish enclave on the border.[5] President Recep Tayyip Erdogan has indicated clearly that Ankara will disrupt any U.S. devised border arrangement.[6] From the Turkish point of view the border security force, which reportedly will largely consist of Kurdish militiamen, will inevitably work in cooperation with the Kurdish terrorist group PKK which is active on the Turkish side of the border, in seeking to create an autonomous Kurdish state, which Turkey reasonably enough regards as an existential threat.[7]

And then there is one other little complication, which is that the United States presence in Syria is completely illegal both under international law and under the U.S. government’s War Powers Act. Syria is a sovereign state with a recognized government and there is no U.N. or Congressional mandate that permits Washington to station its soldiers, Marines and airmen within the country’s borders. The argument that the recent Authorizations to Use Military Force (AUMF) permitted the activity because groups linked to al-Qaeda were active there and the local government was unable to expel them is only thinly credible as the U.S. has also attacked Syrian Army forces and the militiamen linked to Syria’s ally Iran. That constitutes a war crime.

Trump can under the War Powers Act take military action to counter an imminent threat, which was never the case from Syria in any event, but after 60 days he has to cease or desist or go to Congress for authorization up to and possibly including a declaration of war. The military offensive against Syria began under President Barack Obama and it is far beyond that two-month window already, so egregiously in violation that some Congressmen are actually beginning to take notice. Democratic Senator Tim Kaine of Virginia has demanded that no military initiatives in Syria be undertaken without a Senate vote.[8] He said on Thursday that:

“I am deeply alarmed that yet again, the Trump administration continues to raise the risk of unnecessary war, disconnected from any firm policy objectives and core national security interests. To be clear, neither the 2001 or 2002 AUMFs provide authority to target Assad or Iranian proxies in Syria, and it is unacceptable for this action to be taken absent a vote and approval of Congress.”

The animus against Syria runs deep, to include questionable claims from generally hostile sources that al-Assad has deliberately massacred hundreds of thousands of his own people as well as dubious assertations about the use of chemical weapons that led to a U.S. cruise missile attack on a Syrian airbase in Shayrat. A perfect example of how brain dead the western media is over the issue was provided by last week’s article by David Brunnstrom of Reuters on the Tillerson speech, where he wrote:

“U.S. forces in Syria have already faced direct threats from Syrian and Iranian-backed forces, leading to the shoot-down of Iranian drones and a Syrian jet last year, as well as to tensions with Russia.”

The uninformed reader would assume that Americans were the victims of an attack and aggression by Moscow whereas the reality is quite different. Iran and Russia are allies of the legitimate Syrian government that are in the country by invitation to help in its fight against groups that everyone acknowledges to be terrorists. The United States is there illegally and is as often as not using its proxies to fight the Syrian Army.

Syria-phobia goes back to the George W. Bush Administration in December 2003, when Congress passed the Syria Accountability Act, House Resolution 1828. Syria at that time was already in the cross-hairs of two principal American so-called allies in the region, Israel and Saudi Arabia. Both were actively working to destabilize the regime, though for different reasons. The Saudis were fearful of Iranian influence over Damascus but also had a religious agenda in that the secular Syrian regime was protective of religious minorities and was itself an offshoot of Shi’a Islam referred to as Alawites. The Saudis considered them to be heretics.

The Israelis for their part were enamored of the Yinon Plan of 1982 and the Clean Break proposals made in 1996 by a team of Jewish American neocons. Their intention was to transform most of Israel’s neighboring Arab states into warring tribes and ethnicities so they would no longer be a threat. Israeli leaders have stated openly that they would prefer continued chaos in Syria, which remains a prime target. Israel is, in fact, currently bombing Syrian Army positions, most recently near Damascus, while also supporting the ISIS and al-Nusra Front remnants.

The Syrian Accountability Act does indeed read at times like the completely bogus indictment of Saddam Hussein that had led to the invasion of Iraq earlier in 2003.[9] It cites development of weapons of mass destruction and missiles, but its main focus is related to the alleged support of terrorist groups by Damascus. It “Declares the sense of Congress that the Government of Syria should immediately and unconditionally halt support for terrorism, permanently and openly declare its total renunciation of all forms of terrorism, and close all terrorist offices and facilities in Syria, including the offices of Hamas, Hizballah, the Popular Front for the Liberation of Palestine, and the Popular Front for the Liberation of Palestine – General Command.”

One might note that the groups cited by name are not identified as being a threat to the United States. Rather, they are organizations hostile to Israel, which suggests that the motivation for the bill was the usual dominant pro-Israeli sentiment in Congress. The Bill’s sponsor was Eliot Engel of New York, a passionately pro-Israeli legislator.

Be that as it may, the drive to “get” Syria has remained a constant in American Foreign Policy to this day. When the U.S. still had an Embassy in Damascus, in December 2010 President Barack Obama maladroitly sent as Ambassador Robert Ford. Ford actively supported the large demonstrations by anti-regime Syrians inspired by the Arab Spring who were opposed to the al-Assad government and he might even have openly advocated an armed uprising, a bizarre interpretation of what Ambassadors are supposed to do in a foreign country. He once stated absurdly that if the U.S. had armed opponents of the regime, al-Qaeda groups would have been “unable to compete.”[10] Ford was recalled a year later, after being pelted by tomatoes and eggs, over concerns that his remaining in country might not be safe, but the damage had been done and normal diplomatic relations between Damascus and Washington have never been restored.

The desire to bring about regime change in Damascus gathered considerable steam in 2011. Harsh government efforts to repress the demonstrations that did take place inevitably led to violence in both directions and the United States, Saudis and the Gulf States subsequently began to arm the rebels and support the formation of the Free Syrian Army, which Washington assured the American public consisted of only good people who wanted democracy and fundamental rights. To no one’s surprise many of the fledgling democrats accepted U.S. training and weapons before defecting to the al-Qaeda affiliate al-Nusra Front or to ISIS.

Currently, the reconstruction of Syria is proceeding. The Syrian Arab Army is wiping out the last few enclaves controlled by ISIS in Idlib Province and the so-called Syrian Civil War will soon be over but for the mopping up. Many internal refugees have returned to their homes after the government reasserted control and also thousands who fled overseas have reportedly come back. Note that they are returning to areas where the al-Assad government is firmly in charge, perhaps suggesting that, while there were legitimate grievances among the Syrian people, the propaganda insisting that most Syrians were opposed to the regime was grossly overstated. There is considerable evidence that Bashar al-Assad is actually supported by a large majority of the Syrian people, even among those who would welcome more democracy, because they know the alternative to him is chaos.[11]

One would like to think that Syria might again be Syria but Washington is baying for blood and clearly would like to see a solution that involves a fragmentation of the state enabling containment and rollback of Iranian influence there while also satisfying both its clients Israel and the Saudis as well as creating a possible mini-state for the Kurds. The destruction of Syria and the Syrian people will just be regarded as collateral damage while building a new Middle East. Hopefully the Syrians, backed by Iran, Russia and China will prevent that from happening and as the U.S. did not directly engage in much of the hard fighting that destroyed ISIS, it thankfully has little leverage over what comes next.

Whether it is the Riyadh or Tel Aviv leading Washington by the nose is somehow irrelevant as the blame for what is taking place is squarely on the White House. The United States has no coherent policy, nor any actual national interest in remaining in Syria, but the strange political alignments that appear to be playing out in and around the Oval Office have generated a desire to destroy a country and people that in no way threaten the U.S.[12] Someone should remind the president that similar scenarios did not turn out very well in Afghanistan, Iraq and Libya. No one should expect that Syria will be any different.