Wikispooks Comment In the early days of Google, before it's meteoric ascent to global search engine and information dominance, 'Don't be evil' was coined by its idealistic young founders as the corporate slogan/motto. [1] This article is a cogent illustration of the ways in which any such youthful idealism is rapidly compromised and suborned to the purposes and agendas of the establishment as commercial success morphs into big money. In Google's case, that innocent, idealistic, near-infantile motto has clearly been transformed into its Orwellian opposite. As NPR's Peter Sagal once jokingly opined "not being evil will never work in American business" [2]

Google and the NSA: Who’s holding the ‘shit-bag’ now? 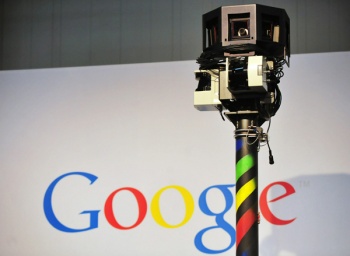 It has been revealed today, thanks to Edward Snowden, that Google and other US tech companies received millions of dollars from the NSA for their compliance with the PRISM mass surveillance system.

So just how close is Google to the US securitocracy? Back in 2011 I had a meeting with Eric Schmidt, the then Chairman of Google, who came out to see me with three other people while I was under house arrest. You might suppose that coming to see me was gesture that he and the other big boys at Google were secretly on our side: that they support what we at WikiLeaks are struggling for: justice, government transparency, and privacy for individuals. But that would be a false supposition. Their agenda was much more complex, and as we found out, was inextricable from that of the US State Department. The full transcript of our meeting is available online through the WikiLeaks website.

The pretext for their visit was that Schmidt was then researching a new book, a banal tome which has since come out as The New Digital Age. My less than enthusiastic review of this book was published in the New York Times in late May of this year. On the back of that book are a series of pre-publication endorsements: Henry Kissinger, Bill Clinton, Madeleine Albright, Michael Hayden (former head of the CIA and NSA) and Tony Blair. Inside the book Henry Kissinger appears once again, this time given pride of place in the acknowledgements.

Schmidt’s book is not about communicating with the public. He is worth $6.1 billion and does not need to sell books. Rather, this book is a mechanism by which Google seeks to project itself into Washington. It shows Washington that Google can be its partner, its geopolitical visionary, who will help Washington see further about America’s interests. And by tying itself to the US state, Google thereby cements its own security, at the expense of all competitors.

Two months after my meeting with Eric Schmidt, WikiLeaks had a legal reason to call Hilary Clinton and to document that we were calling her. It’s interesting that if you call the front desk of the State Department and ask for Hillary Clinton, you can actually get pretty close, and we’ve become quite good at this. Anyone who has seen Doctor Strangelove may remember the fantastic scene when Peter Sellers calls the White House from a payphone on the army base and is put on hold as his call gradually moves through the levels. Well WikiLeaks journalist Sarah Harrison, pretending to be my PA, put through our call to the State Department, and like Peter Sellers we started moving through the levels, and eventually we got up to Hillary Clinton’s senior legal advisor, who said that we would be called back.

Shortly afterwards another one of our people, WikiLeaks’ ambassador Joseph Farrell, received a call back, not from the State Department, but from Lisa Shields, the then girlfriend of Eric Schmidt, who does not formally work for the US State Department. So let’s reprise this situation: The Chairman of Google’s girlfriend was being used as a back channel for Hillary Clinton. This is illustrative. It shows that at this level of US society, as in other corporate states, it is all musical chairs.

That visit from Google while I was under house arrest was, as it turns out, an unofficial visit from the State Department. Just consider the people who accompanied Schmidt on that visit: his girlfriend Lisa Shields, Vice President for Communications at the CFR; Scott Malcolmson, former senior State Department advisor; and Jared Cohen, advisor to both Hillary Clinton and Condoleezza Rice, a kind of Generation Y Kissinger figure — a noisy Quiet American as the author Graham Greene might have put it.

Google started out as part of Californian graduate student culture around San Francisco’s Bay Area. But as Google grew it encountered the big bad world. It encountered barriers to its expansion in the form of complex political networks and foreign regulations. So it started doing what big bad American companies do, from Coca Cola to Northrop Grumman. It started leaning heavily on the State Department for support, and by doing so it entered into the Washington DC system. A recently released statistic shows that Google now spends even more money than Lockheed Martin on paid lobbyists in Washington.

Jared Cohen was the co-writer of Eric Schmidt’s book, and his role as the bridge between Google and the State Department speaks volumes about how the US securitocracy works. Cohen used to work directly for the State Department and was a close advisor to both Condolezza Rice and Hillary Clinton. But since 2010 he has been Director of Google Ideas, its in-house ‘think/do’ tank.

Documents published last year by WikiLeaks obtained from the US intelligence contractor Stratfor, show that in 2011 Jared Cohen, then (as he is now) Director of Google Ideas, was off running secret missions to the edge of Iran in Azerbaijan. In these internal emails, Fred Burton, Stratfor’s Vice President for Intelligence and a former senior State Department official, describes Google as follows:

“Google is getting WH [White House] and State Dept support and air cover. In reality they are doing things the CIA cannot do…[Cohen] is going to get himself kidnapped or killed. Might be the best thing to happen to expose Google’s covert role in foaming up-risings, to be blunt. The US Gov’t can then disavow knowledge and Google is left holding the shit-bag”

WikiLeaks cables also reveal that previously Cohen, when working for the State Department, was in Afghanistan trying to convince the four major Afghan mobile phone companies to move their antennas onto US military bases. In Lebanon he covertly worked to establish, on behalf of the State Department, an anti-Hezbollah Shia think tank. And in London? He was offering Bollywood film executives funds to insert anti-extremist content into Bollywood films and promising to connect them to related networks in Hollywood. That is the Director of Google Ideas. Cohen is effectively Google’s director of regime change. He is the State Department channeling Silicon Valley.

That Google was taking NSA money in exchange for handing over people’s data comes as no surprise. When Google encountered the big bad world, Google itself got big and bad.