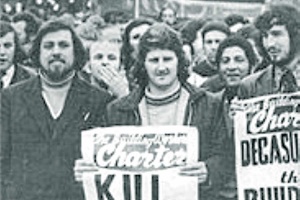 Ricky Tomlinson on the picket line in 1972

In a Westminster Hall debate on 9 December 2015, Andy Burnham, the Labour Party Shadow Home Secretary, revealed how the then-Tory government conspired to frame up building workers involved in the 1972 builders strike.

The builders who were put on trial were known as the Shrewsbury 24.

The first national building strike, it was in pursuit of a £30 pay claim for a 35-hour week. The various unions involved formed a National Joint Council. The construction companies were represented by the National Federation of Building Trades Employers.

Beginning in May, the strike lasted 12 weeks. On September 14, the employers agreed on an increase on basic pay for labourers of £5 a week and £6 for craftsmen, but no reduction in the working week.

Big sites were initially targeted by the pickets, but in August an all-out strike was declared, and small sites in smaller towns were targeted by flying pickets who were effective in closing down most sites.

Responding to a request from the North Wales strike committee, pickets visited eight building sites in Shrewsbury on September 6 to speak to builders continuing to work and persuade them to support the strike. The only threat of violence came from the son of the building contractor at the first site they visited. He threatened the pickets with a shotgun. A picket took it off him and immobilised it. None of the pickets were arrested or even cautioned throughout the day, even though police were in attendance.

After the strike the employers, in collusion with the Conservative government led by Prime Minister Ted Heath, were determined to seek revenge. Alleging use of violent intimidation, the employers built up a dossier of “evidence”, which was given to then-Tory Home Secretary Robert Carr. Robert McAlpine, the construction boss and later Tory party treasurer, wrote to the Metropolitan Police Commissioner to demand police enforce the law. Carr ordered detectives to make a case against the militants who had acted as flying pickets.

In November 1972, 31 of those involved in the picketing at Shrewsbury were arrested, but later released without charge. In February 1973, 24 of the pickets were arrested and charged with more than 240 offences between them, including unlawful assembly and intimidation.

Initial hearings in the North Wales town of Mold in July 1973 only resulted in minor convictions or acquittals. Des Warren, a leading militant and a member of the Communist Party of Great Britain, described the Mold trials as a dress rehearsal for the subsequent trial in the town of Shrewsbury.

Three trials were held in Shrewsbury, with the first beginning on 3 October 1973. Six of the pickets regarded as the ringleaders were charged under an 1875 Act of “conspiracy to intimidate contrary to common law.” Such a charge had never been previously used in an industrial dispute. Four of the six were given lesser sentences, but Ricky Tomlinson was given a two-year sentence and Des Warren three years.

Warren was abandoned by the Communist Party while in prison. On his release, he joined the Workers Revolutionary Party, then the British section of the International Committee of the Fourth International. The Socialist Labour League, predecessor of the WRP, had led a fight against the imprisonment of the Shrewsbury Two: Warren and Tomlinson. While in prison, Warren was administered drugs known as the “the liquid cosh”, leaving him with the symptoms of Parkinson’s disease. He died in 2004, aged 66.

In 2006, a campaign was launched to overturn the prosecution of the Shrewsbury 24, and in April 2012, an application was submitted to the Criminal Cases Review Commission to have the prosecutions overturned.

In January 2014, following a back-benchers’ debate, MPs voted overwhelmingly for the government to release all documents relating to the jailing of the pickets. However, in October 2015, Cabinet Office Minister Oliver Letwin announced the documents would not be released and that the decision could not be reviewed until 2021. He cited security considerations for his decision.

Andy Burnham announced he would reveal new documentary evidence exposing the trials as politically motivated in the December 9 Westminster Hall debate. These debates were held under the auspices of a House of Commons deputy speaker, but no binding votes were taken. Burnham said the documents had been unearthed by the official researcher of the Shrewsbury 24 campaign, Eileen Turnbull.

He quoted from a letter sent on 30 September 1972, by the press officer of the National Federation of Building Trades Employers to its regional secretaries. Titled “Intimidation Dossier,” it stated, “You will be aware that we are compiling a dossier on incidents of intimidation and violence during the recent wage dispute. The intention is to pass this document to the Home Secretary (Robert Carr) for his consideration with a view to tightening up the law on picketing in industrial disputes.”

Carr welcomed the dossier as a December 1972 note revealed by Burnham showed. The note read, “The Home Secretary is interested in this case. Two Counsel to be nominated.”

Burnham read out a letter showing the flimsy nature of the case against the Shrewsbury pickets from 25 January 1973, written by then-Attorney General Peter Rawlinson to Carr. It read, “The building workers’ strike last summer produced instances of intimidation of varying degrees of seriousness.… A number of instances consisted of threatening words and in which there was no evidence against any particular person of violence or damage to property. In these circumstances Treasury Counsel took the view that the prospects (of a conviction) were very uncertain and…proceedings should not be instituted…juries tend to treat mere words more leniently than actual violence.”

Burnham quoted from a note of a conference on 17 September 1973, between police investigating the case and the chief crown prosecutor, Maurice Drake. Referring to the collection of statements, it read, “So that Counsel would be aware it was mentioned that not all original hand-written statements were still in existence, some having been destroyed after a fresh statement had been obtained. In most cases the first statement was taken before photographs were available for witnesses and before the officers taking the statements knew what we were trying to prove.”

The phrase “taking the statements knew what we were trying to prove” showed the police were not engaged in trying to find out the truth about what had happened but were constructing a politically motivated case.

Burnham raised the issue of an ITV documentary, “Red Under the Bed”, made by Woodrow Wyatt, a former Labour MP. Burnham explained the programme was “clearly intended to influence the trial. Wyatt’s controversial commentary was interspersed with footage of John Carpenter (one of the six charged in the first Shrewsbury trial) and Des Warren and pictures of Shrewsbury Crown court.… [It] was first broadcast across ITV regions on 13 November 1973, the day after the prosecution closed its case. We know that the judge watched a video of the programme in his room just after it was broadcast. It is inconceivable that the programme did not influence the trial.…”

Burnham revealed a note headed “secret” from the head of the Information Research Department, a covert propaganda unit within the Foreign and Commonwealth Office (FCO), to a senior FCO official.

It read, “ ’Red Under the Bed’ was shown nationally on commercial television.… We had a discreet but considerable hand in this programme.…Mr Wyatt approached us direct for help.…Mr Wyatt was given a large dossier of our own background material. It is clear from internal evidence in the programme that he drew extensively on this…this was a hard-hitting, interesting and effective exposure of Communist and Trotskyist techniques of industrial subversion.…”

Knowledge and approval of political manipulation went right to the top. A note from Ted Heath’s principal private secretary to the cabinet secretary, Sir John Hunt, read, “The prime minister has seen the transcript (of the TV programme).… He has commented that we want as much as possible of this sort of thing. He hopes that the new Unit is now in being and actively producing.”

The 1970s was a period of enormous struggles by the British working class that had revolutionary implications. The capitalist state was prepared to use all and any means to defend itself.

Burnham, along with the Labour Party, is a staunch defender of the capitalist state. It was originally reported that he intended to demand the release of all the documents, in return for the Labour Party’s support for the government’s draft Investigatory Powers Bill that legalises mass spying by the police and security services.

In the Westminster Hall debate referring to the Trade Union Bill that the Tories are pushing through, which includes police supervision of trade union activities, he said, “I am prepared to support them on that. But if the government wants to build trust, they must be honest about the past. It is only by learning from this county’s past mistakes that we will be able to build the right safeguards into the new legislation and prevent future abuse by the state.”

Burnham did not make this appeal for a limited admission of past crimes into an obstacle to carrying out new ones. “I do not make my support conditional on that,” he said. “I am asking the government to help to build trust so we can help them get the legislation right.”[1]