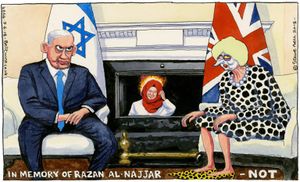 The latest false accusation of anti-Semitism is particularly outrageous.

It concerns a cartoon by the renowned Steve Bell – and the reason it is an outrage is that it is an attempt to pretend the brutal murder of a young Palestinian medic is about hatred of Jews.

All those involved in this lie should be shamed at every turn.

The cartoon featured Theresa May sitting alongside Israeli Prime Minister Benjamin Netanyahu in front of a fire, in which Palestinian medic Razan al-Najjar is burning.

The meaning seems clear: Mrs May couldn’t care any less about the death of this young woman than Mr Netanyahu – she is deeply in cahoots with the Israeli government.

But it seems the image was spiked by The Guardian‘s current editor Kath Viner, on the grounds that it contains an anti-Semitic trope – that of comparing the actions of modern Jews with those of the Nazis who were responsible for the Holocaust in World War II.

In an email to Ms Viner this morning (June 7), he wrote:

“I cannot for the life of me begin to understand criticism of the cartoon that begins by dragging in ‘wood-burning stoves’, ‘ovens’, ‘holocaust’, or any other nazi-related nonsense.

“That was the last thing on my mind when I drew it, I had no intention of conflating the issues of the mass murder of European Jews and Gaza.

“It’s a fireplace, in front of which VIP visitors to Downing Street are always pictured… and the figure of Razan al-Najjar is burning in the grate. It’s a widely known photograph of her, becoming iconic across the Arab world and the burning is of course symbolic. She’s dead, she was shot and killed by the IDF while doing her job as a medic.”

He said he suspected “the reason that you did not get in touch was because you did not really have an argument. The cartoon is sensitive, not tasteless, not disrespectful, and certainly contains no anti-Semitic tropes.”

This silliness is typical of the behaviour of the fake anti-Semitism wolf-crying that has reached epidemic levels in the UK recently for one reason alone: The accusers see what they want to see.

These mean nothing to the accusers. They expect to see anti-Semitism, so that’s what they do see.

But it isn’t anti-Semitic to point out that an innocent non-combatant – and I defy anybody to claim that a person providing medical aid to the injured is an aggressor – was murdered by a soldier for the Israeli government.

And it isn’t anti-Semitic to point out that the UK’s response to this murder has been lukewarm.

Nor is it anti-Semitic to suggest that this lack of condemnation may be due to the UK’s financial interests in Israel – we sell a huge amount of weapons and ammunition to that country.

Following on from that, it would not be anti-Semitic to ask whether British-sold weapons were used in the killing.

These are all legitimate criticisms of both the Israeli government and that of the United Kingdom – as represented by Mr Netanyahu and Mrs May in the cartoon.

And then there is the matter of authorial intent.

Mr Bell says anti-Semitism was the last thing on his mind when he drew the cartoon and, as someone who has also been tarred with the “anti-Semitism” brush without any discussion beforehand, I believe him.

It is as the author Neil Gaiman put it on Twitter, only a few days ago:

"Of course. All I'm saying is that if someone tells you what a written work is about, it's true, for them. If they tell you that's the ONLY thing it is about, they are always wrong.
"And that is the problem. Those who cry “anti-Semitism!” at every opportunity may be making a valid interpretation.
"But it isn’t the only interpretation."[1]

And if it isn’t what the author intended – it is the wrong interpretation. Particularly if it is being used to excuse an appalling act of brutality.[2]