Document:How British journalists are seduced by the Ministry of Defence and spooks 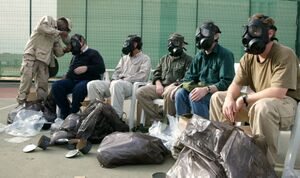 “Not long ago, I bumped into a very senior British military officer at a conference in Europe on international security. The more the US demonised Osama bin Laden, he said, the more support he will attract in the Arab world, particularly among the younger generation”.

The article was given the headline, “This is Britain’s moment”, with the sub-heading: “Whitehall officials have long been sceptical of the US’s line on the Middle East. Now is the time to say so openly”.

I was immediately attacked by Michael Gove, then a Times columnist, who accused me of being part of what he called a “Prada-Meinhof gang”, a member of a “journalistic fan club” of the likes of Gerry Adams, Edward Said “and even the Zapatista fighters”.

Gove’s response was both clever and frivolous. It was also dismissive and intimidating. The message was clear: anyone who questioned the value of the “special relationship” could not be taken seriously. (And any sceptics in Whitehall were beyond the pale.)

Gove may have appreciated rather more the splash headline across the front page of The Guardian the day after the attacks. “Declaration of War”, it trumpeted, helping to set the tone for George Bush’s “war on terror” that dominated the mainstream media in Britain and elsewhere in the West for years to come.

Editors thrived on the rhetoric. Among journalists who relished it were those with a particular vested interest in wars and spooks – military and security correspondents, those with the responsibility of covering the Ministry of Defence and the intelligence agencies.

There was overwhelming enthusiasm in the British media for the invasion of Iraq. The claim put about by Washington neo-cons that Saddam Hussein was in cahoots with al-Qaida, was unquestioned despite the nonsense that a secular dictator would support an extreme Islamist group.

Most defence correspondents greeted the deployment of thousands of British troops to Afghanistan in 2006 with gung-ho enthusiasm. And most security correspondents welcomed the prospect of more stories to report on terror and counter terror operations.

Beneath the surface optimism, there was widespread concern among military and security officials, concern that was rarely reported. Mark Laity, a former BBC defence correspondent appointed as adviser to the then Nato secretary general and former Labour defence secretary George Robertson, chided me for asking, at a pre-deployment exercise in Germany in 2006, what the chances were of British soldiers being attacked by extremist militias in Afghanistan. Panicking Nato officials did not want to frighten public opinion.

Healthy scepticism is the enemy of those – journalists, spooks, and military commanders alike – who licked their lips at the prospect of reporting on a new war or terrorist threat.

Such scepticism would certainly not be welcomed by soldiers or MoD press officers responsible for embedding journalists with troops on operations or even back at headquarters. And it would not endear security correspondents to their contacts in MI5, MI6, or GCHQ.

Britain’s occupation of Iraq and Afghanistan on the coat-tails of the US ended in tears after hundreds of avoidable deaths and a bill of tens of billions of pounds. But it was only after mounting evidence emerged of fatalities or life-changing injuries – the result often of inadequate equipment or ill-thought out tactics – that the media began to be critical.

But military top brass known personally by defence journalists were spared. Defence correspondents preferred to blame the government, and the Treasury in particular, for not giving the armed forces more money.

The MoD knows how to seduce journalists, especially those writing for specialist defence publications – often used as primary sources by mainstream journalists – by showing off new weapons. This is something defence ministers and officials hope will also keep the military onside and stop them leaking about how bad their equipment is.

British taxpayers are coughing up more than £5 billion on Ajax, the armoured recce vehicle planned for the army. It is years late, with noise and vibration that has caused soldiers potentially serious health problems and guns that cannot fire accurately when the vehicle is moving. It cannot reverse properly and is too heavy to be lifted to any prospective battlefield by the RAF’s A400 transport plane.

The problems facing Britain’s unaffordable weapons programme are regularly highlighted in reports from parliament’s financial watchdog, the National Audit Office, the Commons Public Accounts Committee, and sometimes by the Commons Defence Committee. But their reports are rarely mentioned in the mainstream media.

One senior MoD official told me he chose to resign after discovering how his department was covering up the true cost and technical problems facing the navy’s future frigate projects.

The MoD can effectively play one journalist against another. I have asked an MoD press officer for a response to a critical article I planned to write only to see a piece designed to sabotage my article in another publication.

Another way of seducing journalists is to promise them there would be “more to come” if they wrote stories that were “helpful” to the MoD or the intelligence agencies.

Despite the government’s war against whistleblowers, defence correspondents can still benefit from leaks arising from the rivalry between the different branches of the armed forces and use the expertise of those writing for specialist journals.

Security correspondents really have just a single source. Gone are the days when MI5, MI6, and GCHQ, or police Special Branches blamed each other for mistakes.

In the world of the spooks, few in the media raised questions about the root causes of terror attacks in Britain even when Eliza Manningham-Buller, then head of MI5, warned that the invasion of Iraq would increase the terrorist threat in Britain.

Even fewer defence or security correspondents pursued claims that Britain’s special forces, MI5, and MI6 colluded with the CIA and US special forces in the abuse and torture of terror suspects and Iraqi and Afghan detainees.

This journalist was warned by a colleague not to pursue such allegations as they had been vigorously denied by the then foreign secretary, Jack Straw. The allegations turned out to be entirely true.

The most explosive, and most significant, exposure of the activities of Britain’s intelligence agencies, notably GCHQ, and how they were amassing personal data on entirely innocent British citizens – including journalists – was persistently played down by security correspondents.

Edward Snowden, the US security contractor who blew the whistle about what the agencies were up to, was damned as a traitor whose revelations were not worth commenting on.

Former top spooks were asked by security and intelligence chiefs to condemn Snowden in print and on radio and television programmes. That was enough to persuade most journalists to ignore or play down his revelations.

The security and intelligence agencies have no official spokesperson. They choose one or two contacts in the main media organisations with whom they share mobile phone numbers for briefing purposes.

These contacts thus enjoy a privileged position in a relationship based on off-the-record, therefore deniable, discussions.

Their colleagues, even editors, defer to them as the holders of “secret” information. Their claims cannot be contradicted or checked, not for a long time at least. Defence think tanks and academics are wary of rocking the boat, aware that their source of funding may be jeopardised.

MI6 and the media

MI6 in particular has used the media, sometimes placing articles by their officers using pseudonyms. In a notable example of trying to interfere in the reporting of a conflict, MI6 attempted to influence public opinion during the Bosnian crisis in the 1990s by suggesting that atrocities were being carried out by all sides, not only the Serbs.

MI6 was doing the bidding of the government worried about the prospect of a Muslim (Bosnian) state in Europe. One MI6 officer, writing under a pseudonym, attacked the experienced BBC reporter, Kate Adie, in an article under the headline, “Glamour Without Responsibility”.

During the Cold War, MI6 developed a close relationship with journalists and editors. Via the Foreign Office’s secret Information Research Department (IRD) it regularly supplied propaganda material of varying degrees of subtlety to a select list of journalists who may or may not have realised its source.

David Owen closed down the IRD in 1977 when he learned about it when he was appointed foreign secretary.

IRD was later the model for a shadowy “strategic communications” unit, part of the government’s Prevent counter-radicalisation project.[1] MI6 has had a department called “I/Ops” – information operations designed to influence journalists.

GCHQ has run a similar department – the “4Ds”, standing for Deny/Disrupt/Degrade/Deceive. The MoD has listed “investigative journalists” as a “non traditional threat”.

An official attached to the Joint Intelligence Committee told me the Cabinet Office had a file on me, among other journalists. David Shayler, the renegade MI5 officer, told me his agency had five volumes of material on me – and that was more than 25 years ago.

Journalists writing about the security and intelligence agencies may or may not have been aware – many still not be aware – of these initiatives. But they reveal the efforts made to target journalists and welcome them into what the agencies call “the ring of secrecy”.

Once embraced, such journalists are tempted to indulge in self-censorship, reluctant to write or broadcast critical articles.

Those journalists committed to scrutinising the spook agencies were belatedly helped by other bodies. The parliamentary Intelligence and Security Committee began seriously to question the activities of these agencies when Dominic Grieve, the former Conservative attorney general, now no longer an MP, became its chair in 2015.

A growing number of judge-led inquiries into terrorist attacks have revealed mistakes by the agencies though some evidence is suppressed.

But much goes unreported and journalists succumb to self-censorship in the hope they will be rewarded by their sources in the agencies. Snowden was kept at arms’ length by many media organisations.

Deference, as much as secrecy, remains the English disease.

Scarcely mentioned too, are the activities of Britain’s special forces, units that will play an increasing role along with armed drones. Without effective scrutiny – by the media as well as MPs – how they are deployed, and with what rules of engagement, will go unreported.

A blanket secrecy ban is imposed – officially – on the activities of the special forces. Unless, that is, you are a defence and security correspondent trusted by senior officials. When there is a positive story to tell, the official ban is ignored.

Declassified UK’s role is simply to help plug a yawning gap, and one that is widening all the time, in the reporting of what Britain’s spooks, armed forces, and arms sales people, are up to, and to expose cover ups, hypocrisy, avoidable and hugely expensive mistakes, many of them fatal.

That means objective reporting, but it also means providing the context, being sceptical, continually asking questions.