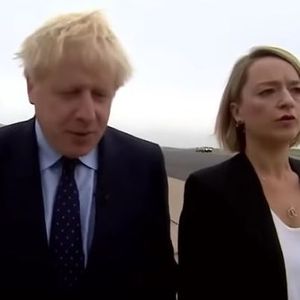 ★ Start a Discussion about this document
Interfering with Laura Kuenssberg

Last night the BBC was reporting on the Conservative manifesto. This is a document whose most striking pledge is to fill in some of the potholes in roads that have proliferated due to massive cuts in local authority funding, and to give free hospital car parking to those visiting a terminally ill relative. Just think of the last one. How do you prove your relative is terminally ill? What if there is a chance they might get better? The administration of this system is going to require people to have some form of certificate or token that all hope is now lost. For the car park. The Tories are all heart.

As the News continued, Laura Kuenssberg told us that the battle lines between the parties are now clearly drawn, and the major division is over how much the government “should interfere in the economy”.

Interfere. Not intervene. Not regulate. Interfere. It is a very deliberate choice of word. Let me turn to the Oxford English Dictionary:

1) Prevent from continuing or being carried out properly;

2) Handle or adjust without permission;

3) Become involved in something without being asked;

Words matter. Kuenssberg chose a word with powerful negative connotations and no possible positive meaning, to describe the alternative to the Tories. Kuenssberg talking of government interfering in, rather than intervening in, the economy is in itself a very strong and explicit declaration of belief in an Ayn Rand, “Britannia unchained”, free market, ultra neoliberal world view. To explicitly frame the choice in the election as between the Tories and “interfering” is just another example of the way the BBC slants their election coverage, permanently.

Now I started to draft an article three days ago, before that particular Kuenssberg propaganda masterclass.

Here is what I wrote as a draft three days ago:

“Maybe I am just unlucky. I have had television news bulletins transport me to hear vox pops featuring former Labour voters in Dudley who now want to vote Conservative to GET BREXIT DONE. I have seen vox pops in fishing wharves in Peterhead and Grimsby, in dismal cafes in Hartlepool, in bingo halls in Yarmouth, in pubs back in Dudley, on high streets in Wakefield, in a shopping mall in Thurrock, in hardware stores back in bloody Dudley again. The country is full of people who want to GET BREXIT DONE, and who will NEVER VOTE LABOUR AGAIN.

"The strange thing is that I have not seen a single vox pop from Richmond, featuring an educated woman who is switching from a lifetime of Tory voting because they have become a far right party and are going to crash the economy with hard Brexit. But there are many people like that in Richmond, and indeed all over London, and throughout much of southern England. They exist but are not worth vox popping, apparently. Because they are not the broadcasters’ chosen “narrative”.

"The BBC, ITN and Sky will doubtless defend the very obviously targeted demographic and destination of their “vox pops” on the grounds that this is the “narrative” of the election. But that is a self-reinforcing prophecy. The public are relentlessly being told that what ordinary people want is to “GET BREXIT DONE” and to vote Tory. But that is actually only what about 40% of the people want. We just aren’t being shown the other 60% as the broadcasters focus relentlessly on areas with the highest leave vote, and on vox pop subjects with the least possible education.”

While that passage was still on the stocks, last night, alongside the Laura Kuenssberg analysis, the BBC gave us a vox pop from the Rother Valley that fitted perfectly the above description. It came from a Yorkshire Labour seat that voted Leave. It featured Labour Party voters who will now vote Conservative. The ladies interviewed were perfectly primed with precisely the main Tory slogans. A lady told us she wanted Boris so we could “get Brexit done and get on with domestic reforms”. Another ex-Labour voter told us she would vote for Boris because “he may not be trustworthy, but I like him”. Trust and likeability are two factors the pollsters regularly measure. It is important for the Tories that voters prioritise likeability over trust, because Johnson’s Trust numbers are appalling. How fortunate that the BBC happened to find a little old lady in the Rother Valley who could express this so succinctly!

Or maybe it is not so surprising. With the mainstream media as such a reliable echo chamber of public slogans, perhaps it is not surprising to find the public just echo them too, as they do in North Korea. The state media in the UK is of course not the only propaganda outlet. Billionaires control 87% of print news media by circulation, and are aggressively Tory for obvious reasons of self-interest.

This leads to the incredible circularity of the “Newspaper Reviews” that take up such a high proportion of broadcast news output. The broadcasters “review” the overwhelmingly right wing print media. And who do they invite to do the reviewing? Why the billionaire employed journalists of the overwhelmingly right wing print media, of course! So we have the surreal experience of watching journalists from The Times and the Spectator telling us how great an article in the Daily Mail is, about how Corbyn is a Russian spy and Scotland not really a country at all.

If that was not bad enough, we then get deluged by “commentators” from “think tanks” which are again billionaire funded, like the Institute of Economic Affairs and scores of others, sometimes with money thrown in from the security services, like the Quilliam Foundation and scores of others. It is a never-ending closed circular loop of propaganda.

The truth is that it largely works. Social media is overwhelmingly sceptical of the government's Official Narrative, but we still live in a society where the power of mass broadcasting and even print retains a remarkable amount of influence, particularly on the old and the poorly educated. It's no coincidence that it is precisely the old and the poorly educated that are the targets of Dominic Cummings’ "Brexit election” strategy. If it comes off, Laura Kuenssberg and her fellow hacks will have proven that the power of the mainstream media is as yet unbroken.