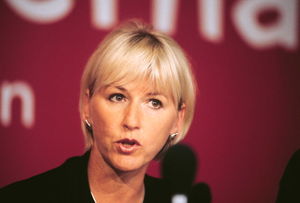 Nearly every western country has an Israel lobby

Swedish Foreign Minister Margot Wallström recently suggested an inquiry into a surge in Israel’s reported extra-judicial killing of Palestinian demonstrators after Prime Minister Benjamin Netanyahu called for a harsh response and told his police and soldiers that those opposed to the continued occupation of the West Bank were “terrorists.” Almost immediately, the Israeli government denounced Wallström as engaging in “political stupidity,” banning her from travel to Israel, while one newspaper close to the government suggested that she might be assassinated, as fellow Swede Count Folke Bernadotte was by Jewish militants in 1948, because anti-Semitism appears to be in the Swedish DNA.[1]

All of that outrage and personal ridicule is pro forma for an Israeli government that reflexively smears and denigrates any and all critics, but the more interesting epilogue was the unanticipated discovery by the Swedish and international media that Wallstrom has not been paying the full rent on the subsidised government apartment that she occupies.[2] The revelation follows a familiar pattern, where critics of Israel suddenly find themselves being discredited for something completely unrelated to the Middle East. President George H. W. Bush ('the good Bush') suffered a similar come to Jesus moment in 1991 when he went on national television to denounce the pressure tactics of the Israel lobby. The Israeli government was demanding U.S. Treasury backed loans to construct illegal settlements. President Bush, who was running for reelection and far ahead in the opinion polls, suddenly was confronted by a well-funded and organised opposition raising doubts about him and his record. And President Bush was not reelected, presumably learning along the way that one does not trifle with the Israel Lobby, to be replaced by the enthusiastically Zionist Bill Clinton.[3]

United Nations Secretary-General Ban Ki-moon is also wondering about Israel’s alleged commitment to peace. On Tuesday he said “it was human nature to react to occupation,” following up with a comment on Wednesday regarding Israel’s “stifling” occupation of Palestine.[4] Netanyahu reacted with his usual over the top rhetoric, stating that Ban “was encouraging terror.” One might also anticipate, as in the case of Wallstrom, a well-orchestrated media blitz questioning Ban’s motives or explaining how he has always been a closet anti-semite.[5] It is par for the course and fully expected when one criticises Israel.

Indeed, it is a global phenomenon. Wherever one goes – Western Europe, Canada, Australia, New Zealand and the United States – there is a well-organised and funded lobby ready, willing and able to go to war to protect Israel. Most of the organisations involved take at least some direction from officials in Tel Aviv. Many of them even cooperate fully with the Israeli government, its parastatal organisations and faux-NGOs like the lawfare center Shurat HaDin. Their goal is to spread propaganda and influence the public in their respective countries of residence to either hold to the line coming out of Tel Aviv or to confuse the narrative and stifle debate when potential Israeli crimes are being discussed.

Israel’s diaspora allies are backed up by a formidable government organised machine that spews out disinformation and muddies the waters whenever critics surface. The Israeli Foreign Ministry has a corps of paid “volunteers” who monitor websites worldwide and take remedial action and there is a similar group working out of the Prime Minister’s office.[6] That is why any negative story appearing in the U.S. about Israel is immediately inundated with pro-Israel comments, many of which make exactly the same coordinated points while exhibiting the same somewhat less than perfect English. On sites like Yahoo! they are actually able to suppress unwelcome comments by flooding the site with “Dislike” responses. If a comment receives a large number of dislikes, it is automatically blocked or removed.

The sayanim, local Jews in their countries of residence, are essential to this process, having been alerted by emails from the Israeli Foreign Ministry about what to do and say. The reality is that Israel has lost the war of public opinion based on its own actions, which are becoming more and more repressive and even inhumane and so are difficult to explain. That means that the narrative has to be shifted by Israel’s friends through subterfuge and the corruption of the information process in each country. In some places the key media and political players who are engaged in the process can simply be bought. In other places they can be intimidated or pressured into taking positions that are neither in their own countries’ interests nor morally acceptable. In large countries like the United States, Britain and France a combination of friendly persuasion and coercive elements often come together.

In all cases, the objective is the same: to repress or misrepresent any criticism of Israel and to block any initiatives that might be taken that would do damage either to the Israeli economy or to the country’s perceived standing in the world. In some countries Israel’s advocates work right out in the open and are highly successful in implementing policies that often remain largely hidden but that can be discerned as long as one knows what to look for.

Recent Israel lobby activity in the United States has included legislation at state levels to make illegal divestment from Israel or to promote boycott of Israeli products. A trade pact with Europe will reportedly include language requiring the United States to take retaliatory action if any European country tries to boycott Israel, to include the West Bank settlements, which the empowering legislation regards as part of Israel proper.

Israel is also working to create a mechanism for global censorship of the internet to ban “incitement,” which clearly is a euphemism for material that is critical of its policies. Recently Facebook has begun to delete from its site any “hate speech” and “terrorism” related material but what has not been widely noted is that the apparent restrictions also have involved sites critical of Israel including Christians United for Peace.

Many prominent critics of the American Israel Political Action Committee (AIPAC) are unaware that AIPAC exists in various forms in a number of other countries. BICOM, the Britain Israel Communications and Research Centre, is located in London. The French equivalent is the Conseil Representatif des Institutions Juives de France (CRIF)).[7] In Canada there is a Center for Israel and Jewish Affairs CIJA,[8] in Australia a Zionist Federation of Australia[9] and in New Zealand a Zionist Federation of New Zealand.[10]

While AIPAC is specifically focused on the U.S.-Israel relationship, its counterparts in Europe often deal with a whole range of issues that they define as Jewish, but protecting Israel is always part of their agenda, particularly for those groups that label themselves as Zionist. The political power and financial muscle of the groups gives them access to government far beyond the actual numbers of their supporters. In France this has led to the legislation of hate crimes that de facto exist to protect Jews that have been also been interpreted as limitations on one’s ability to criticise Israel. In its most recent test, a French court declared that a peaceful protest promoting Boycott, Divestment and Sanctions (BDS) directed against Israel was illegal.

Many believe that France now has less free speech than any other European country. Recently, the alleged humourous magazine Charlie Hebdo, ran a revolting cartoon showing the little Syrian boy Alan Kurdi who drowned in Turkey last summer as all grown-up and sexually assaulting a woman in Germany. There was considerable outrage throughout the world but no sign that the French government will do anything to prosecute the magazine since it was Muslims who were being ridiculed. Charlie Hebdo frequently insults Muslims (and also Christians) but rarely lampoons Jews.

In Britain, Jewish organisations uniquely are allowed to patrol heavily Jewish neighbourhoods in police-like uniforms while driving police type vehicles and there have been reports of their threatening Muslims who enter those areas. Prime Minister David Cameron’s government, which is responsive to a Conservative Friends of Israel lobbying group, has also done its part to create official barriers to any spread of the BDS movement. It is proposing legislation that will enable it to overrule decisions by local government councils that seek to cut business or investment ties with Israel and, more particularly, Israeli settlements, under the pretext that such action interferes with the conduct of foreign affairs. The British government is also considering its own brand of hate speech legislation, banning from social media any commentary that is considered to be anti-Semitic, which will almost certainly extend to criticism of Israel.

Canada’s government has also threatened to use hate speech laws to block criticism of Israel and forbid BDS-related activity. Australia meanwhile, has ceased referring to east Jerusalem as “occupied” and is apparently leaning towards similar “non-pejorative” language relating to the militarised occupation of the West Bank, preferring the neocon-favoured dodge “disputed.” New Zealand has proposed Israeli-Palestinian peace talks that specifically demands that participants “refrain from referring a situation…to the International Criminal Court,” which would effectively decriminalise war crimes committed by both sides during the two recent invasions of Gaza. As a United Nations investigation determined that Israel was disproportionately responsible for what did occur, the proposal eliminates accountability and is effectively a get out of jail free card for some Israeli government officials.

And so it goes. Criticise Israel and there will be a comeuppance by virtue of a highly developed international system that relies on government direction as well as volunteer supporters who are able to shape both the media message and the political response. Accepting that as a given, I suppose one should be proud of being called an anti-Semite every time the label is misapplied to stifle dissent, but it all sadly reflects a lowering of the discussion to a dirt level. This might just be because there is no justification for Israeli behaviour.[11] The fact is that in terms of systematic human rights violations Israel is something beyond an apartheid state, frequently engaging in open racism and, in the opinion of many observers, crimes against humanity. It is furthermore a persistent source of instability in the Middle East and even beyond.

Israel is a liability to the United States and to the European nations that it has successfully manipulated into acquiescence regarding its bad behaviour. When AIPAC and its overseas clones act for Israel, the host nations in which these organisations exist should recognise exactly what is taking place. If Israel is truly first in their hearts and minds that is perfectly acceptable but its advocates should perhaps consider moving there and letting the rest of us be. Would that be too much to ask?[12]