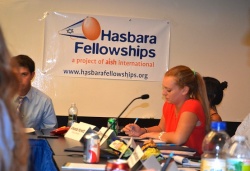 Image right: The David Project - Check out the full photo-stream which is from a Hasbara Fellowship course on "The Iranian Threat" conducted on 4 August 2013

Author's Note When Tel Aviv goes to war, universities and activists are organized to beat back the bad news.

The past few weeks have not been kind to Israel in the public relations department. The war against Gaza was so lopsided and obviously contrived that even in the United States pro-Israel sentiment began to soften. For those interested in fine points of national security there were three news articles of note. The first [1] quoted from a document from the Edward Snowden haul citing a 2007 National Security Agency (NSA) assessment naming Israel as the “third most aggressive intelligence service against the U.S.” It ranked just behind perennial adversaries China and Russia in terms of aggressiveness and the persistence of its espionage effort. Israel was also cited as a “leading threat” to the infrastructure of U.S. financial institutions.

The second article [2] reported how U.S. Secretary of State John Kerry had his cell phone communications intercepted by Israel in 2013 when he unsuccessfully sought to negotiate a peace agreement with the Palestinians. The Secretary of State certainly has access to cell phones with encryption, though Israeli snoopers might be able to defeat such measures, but it is possible that he was speaking on open lines at the time. It is an incident recalling both the NSA tapping of German Chancellor Angela Merkel’s cellphone and the notorious Victoria Nuland phone intercepts regarding Ukraine in which she colorfully expressed her opinion of the Europeans.

The third piece [3] described how Israel was given weapons from a U.S. stockpile during its assault on Gaza, allegedly without either the White House or the State Department being informed about what was occurring. As the weapons were being used against mostly Palestinian civilians and included targeting United Nations facilities, the transfer should have been regarded as highly sensitive, politically speaking. One article [4] discussing the confusion also cited an acrimonious phone call between the Israeli prime minister and the American president, noting drily that the administration clearly has “…little influence over the government of Prime Minister Benjamin Netanyahu” in spite of Tel Aviv being the leading recipient of U.S. aid dollars.

All of the above would be embarrassing enough, but Israel has also been extremely active in yet another enterprise that falls in the gray area between covert operations and overt governmental activity. Many governments seek to respond to negative commentary in the media, but they normally do it openly with an ambassador or press officer countering criticism by sending in a letter, writing an op-ed, or appearing on a talk show. Israel does indeed do that, but it also engages in other activities that are not so transparent. 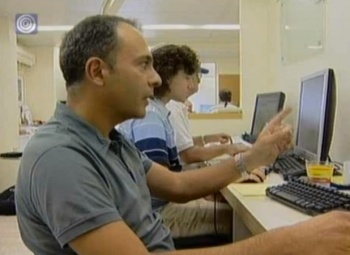 Screenshot shows Israelis in an organized digital “war” room posting tweets against the flotilla to Gaza in the summer of 2011. - Source

When an intelligence organization seeks to influence opinion by creating and deliberately circulating false information, it is referred to as a “disinformation operation.” Such activity is generally described as public diplomacy when it is done openly by a recognized government official and the information itself is both plausible and verifiable, at least within reasonable limits. But Israel has refined the art of something in between, what might be referred to more accurately as “perception management” or “influence operations” in which it only very rarely shows its hand overtly, in many cases paying students as part-time bloggers or exploiting diaspora Jews as volunteers to get its message out. The practice is so systemic, [5] involving recruitment, training, Foreign Ministry-prepared information sheets, and internet alerts to potential targets, that it is frequently described by its Hebrew name, hasbara, which means literally “public explanation.” It is essentially an internet-focused “information war” that parallels and supports the military action whenever Israel enters into conflict with any of its neighbors.

The hasbara onslaught inevitably cranks up when Israel is being strongly criticized. There were notable surges in activity when Israel attacked Gaza in 2009 and 2012, as well as when it hijacked the Turkish humanitarian relief ship the Mavi Marmara in 2011. The recent Gaza fighting has inevitably followed suit, producing a perfect storm of pro-Israel commentary. The comments tend to appear in large numbers on websites where moderation and registration requirements are minimal, including Yahoo! News, or Facebook and Twitter. Sites like TAC as well as leading national newspapers have much stricter management control over who comments, and are generally avoided.

The hasbara comments are noticeable as they tend to sound like boilerplate, and run contrary to or even ignore what other contributors to the site are writing. They often include spelling and syntactical hints that the writer is not natively fluent in English. As is the practice at corporate customer support call centers in Asia, the commenters generally go by American-sounding names and they never indicate that they are Israelis or working on behalf of the Israeli government. They tend to repeat over and over again sound bites of pseudo-information, most recently maintaining falsely that Hamas had started the “war” and that Israel was only defending itself. The commenters operate in the belief that if something is repeated often enough in many different places it will ipso facto gain some credibility and create doubts regarding contrary points of view.

That Israel is engaged in perception management on a large scale has more-or-less been admitted by the Israeli government, [5] and some of its mechanisms have been identified. The Israeli Foreign Ministry even sent a letter out to a number of pro-Israel organizations emphasizing the “importance of the internet as the new battleground for Israel’s image.” Haaretz reported in 2013 [6] how Prime Minister Netanyahu’s office collaborated with the National Union of Israeli Students to establish “covert units” at the seven national universities to be structured in a “semi-military” fashion and organized in situation rooms. Students are paid as much as $2,000 monthly to work the online targets. [7]

The serious collaboration between government and volunteers actually began [8] with Operation Cast Lead in early 2009, an incursion into Gaza that killed more than 1,800 Palestinians, when the Foreign Ministry pulled together a group of mostly young computer savvy soldiers supplemented by students both overseas and within Israel to post a number of government-crafted responses to international criticism.

Many of the volunteers worked through a website [5] giyus.org (an acronym for Give Israel Your United Support). The website included a desktop tool called Megaphone that provided daily updates on articles appearing on the internet that had to be challenged or attacked. There were once believed to be 50,000 activists receiving the now-inactive Megaphone’s alerts.

There have also been reports about a pro-Israel American group called Committee for Accuracy in Middle East Reporting in America (CAMERA) preparing to enter its own version of developments in the Middle East on the popular online encyclopedia Wikipedia. [9] E-mails from CAMERA reveal that the group sought volunteers in 2008 to edit material on Wikipedia “to help us keep Israel-related entries … from becoming tainted by anti-Israel editors,” while also recommending that articles on the Middle East be avoided initially by supporters so as not to arouse suspicions about their motives. Volunteers were also advised to use false names that did not hint at any Israeli or Jewish connection and to avoid any references to being organized by CAMERA. Fifty volunteers reportedly were actively engaged in the program when it was exposed in the media and the program was put on hold.

CAMERA is an Internal Revenue Service-approved 501(c)(3) organization, which means that contributions to it are tax exempt. Such exemptions are granted to organizations that are either charitable or educational in nature and they normally preclude any involvement in partisan political activity. As CAMERA would not appear to qualify as a charity, it is to be presumed that its application for special tax status stressed that it is educational. Whether its involvement in “un-tainting” Wikipedia truly falls within that definition might well be debated, particularly as it appears to have been carried out in semi-clandestine fashion. CAMERA might well also be considered to be a good candidate for registration under the Foreign Agents Registration Act of 1938 (FARA [10]), as its activity is uniquely focused on promoting the perceived interests of a foreign government.

The use of the nation’s universities as propaganda mills by the Israeli government also raises other significant issues. The growing Boycott, Divestment, and Sanctions movement (BDS [11]) has included some universities as targets because of their alleged involvement with the government in the occupation of the West Bank. That the universities are also involved in possible government-sponsored information operations might be an additional convincing argument that BDS supporters might use to justify blacklisting at least some Israeli academic institutions.

Every government is engaged in selling a product, which is its own self-justifying view of what it does and how it does it. But the American public in particular should be aware of the extraordinary efforts that Israel and its supporters make to present a crafted and coordinated image through the media, particularly by way of the Internet. There are certainly many reasons why the United States uniquely views Israel favorably, but the skillful use of information manipulation and perception management certainly contributes to the process.