Document:Jews Boast of Owning Hollywood - But Slam Gentiles Who Say the Same Thing 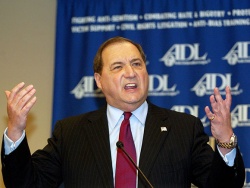 Image right: Abraham Foxman - Director of the ADL at the publication date of this article

This article became topical again in September 2015 when Google, under pressure from the ADL agreed to remove a search result that constituted "an antisemitic answer" ("Jews") and referencing it.

According to the Daily Telegraph:

"Google has promised to remove a search result that gave an antisemitic answer after asking the search engine "Who Runs Hollywood".

Putting the query into Google results in a information box giving the answer "Jews". The box quotes from an online article from the New Observer, a website that claims to present "unique news" and "unique views" and includes terms such as "third world colonisers" in its editorial policy. It claims to "present current affairs without the spin of the controlled media". [1]"

So it appears that, if the answer to any question is Jews, then it is at risk of being judged Antisemitic

The all-out attack by the Jewish Supremacist “Anti-Defamation League” (ADL) on actor Gary Oldman [2] for daring to mention that Jews run Hollywood has highlighted the fact that Jews can routinely boast about that fact—but if Gentiles say exactly the same thing, they are attacked as “anti-Semites.”

“Mel Gibson is in a town that’s run by Jews and he said the wrong thing because he’s actually bitten the hand that I guess has fed him.”

For this “sin” Oldman was condemned by the ADL and immediately issued a grovelling apology, [3] saying that he hoped his “heartfelt apology would be received as genuine as he intended it to be” and that he has “nothing against Jews.”

This apology was however not good enough for the ADL’s Abe Foxman, who in a press statement said that

“We have just begun a conversation with his managing producer” [in other words that the Jewish Supremacists will now be seeking to smash Oldman’s career - ed].

“While his apology may be heartfelt, Mr. Oldman does not understand why his words about Jewish control were so damaging and offensive, and it is therefore insufficient,”

However, Foxman has never said anything when his fellow Jews have said exactly what Oldman said—and even more.

For example, the Jewish journalist Joel Stein, who used to write for the Los Angeles Times and who currently writes for Time magazine, wrote a large article in the LA Times on 19 December 2008, titled “Is Hollywood Run by Jews? You Bet.” 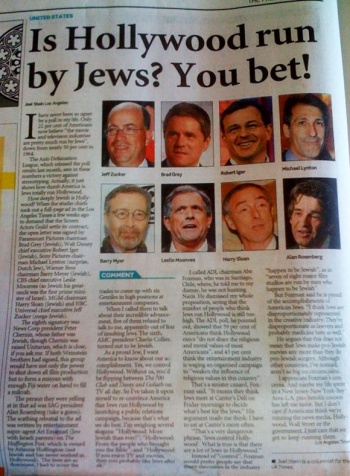 In this article (now “retitled” on the LA Times website as “Who runs Hollywood? C’mon”— obviously the original title was too truthful), Stein explained precisely how Jews control Hollywood:

I have never been so upset by a poll in my life. Only 22% of Americans now believe “the movie and television industries are pretty much run by Jews,” down from nearly 50% in 1964. The Anti-Defamation League, which released the poll results last month, sees in these numbers a victory against stereotyping. Actually, it just shows how dumb America has gotten. Jews totally run Hollywood.

How deeply Jewish is Hollywood? When the studio chiefs took out a full-page ad in the Los Angeles Times a few weeks ago to demand that the Screen Actors Guild settle its contract, the open letter was signed by: News Corp. President Peter Chernin (Jewish), Paramount Pictures Chairman Brad Grey (Jewish), Walt Disney Co. Chief Executive Robert Iger (Jewish), Sony Pictures Chairman Michael Lynton (surprise, Dutch Jew), Warner Bros. Chairman Barry Meyer (Jewish), CBS Corp. Chief Executive Leslie Moonves (so Jewish his great uncle was the first prime minister of Israel), MGM Chairman Harry Sloan (Jewish) and NBC Universal Chief Executive Jeff Zucker (mega-Jewish). If either of the Weinstein brothers had signed, this group would have not only the power to shut down all film production but to form a minyan with enough Fiji water on hand to fill a mikvah.

The person they were yelling at in that ad was SAG President Alan Rosenberg (take a guess). The scathing rebuttal to the ad was written by entertainment super-agent Ari Emanuel (Jew with Israeli parents) on the Huffington Post, which is owned by Arianna Huffington (not Jewish and has never worked in Hollywood.)

The Jews are so dominant, I had to scour the trades to come up with six Gentiles in high positions at entertainment companies. When I called them to talk about their incredible advancement, five of them refused to talk to me, apparently out of fear of insulting Jews. The sixth, AMC President Charlie Collier, turned out to be Jewish.

As a proud Jew, I want America to know about our accomplishment. Yes, we control Hollywood. Without us, you’d be flipping between “The 700 Club” and “Davey and Goliath” on TV all day.

So I’ve taken it upon myself to re-convince America that Jews run Hollywood by launching a public relations campaign, because that’s what we do best. I’m weighing several slogans, including: “Hollywood: More Jewish than ever!”; “Hollywood: From the people who brought you the Bible”; and “Hollywood: If you enjoy TV and movies, then you probably like Jews after all.” [4]

But I don’t care if Americans think we’re running the news media, Hollywood, Wall Street or the government. I just care that we get to keep running them. [4]

Stein has not had his “employers spoken to” by Foxman and the ADL, unlike the unfortunate Gary Oldman.

The difference is, of course, that the Jews are perfectly happy as long as it is they who boast about their control of Hollywood — but woe betide any Gentile who dares to say the same thing, they are just anti-Semites.

Stein is not the only prominent Jewish journalist to have boasted about Jewish control of Hollywood. 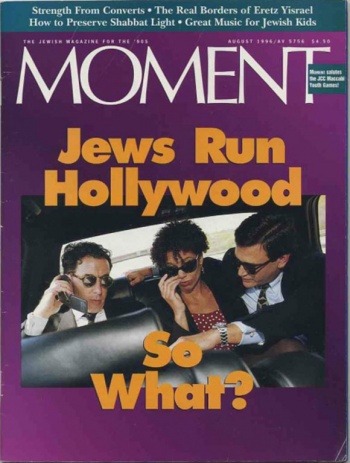 (This article too, has been “retitled” on the Moment magazine archives to “Is Hollywood too Jewish?” also because the original title was too truthful.)

Medved said in the article that:

It makes no sense at all to try to deny the reality of Jewish power and prominence in popular culture. Any list of the most influential production executives at each of the major movie studios will produce a heavy majority of recognizably Jewish names. [5]

Medved also reveals how Jews also took over the only major Hollywood studio which was run by Gentiles: the Walt Disney Corporation:

The famous Disney organization, which was founded by Walt Disney, a gentile Midwesterner who allegedly harboured anti-Semitic attitudes, now features Jewish personnel in nearly all its most powerful positions.....

Men and women of Jewish background enjoy a vastly disproportionate — if not dominant — influence in Hollywood. [5]

He also points out that even studios which were bought out by the Japanese Sony Corp. and by Rupert Murdoch, still had to hire

a Yiddish team of long-time industry leaders in all the most powerful positions. When Mitsushita took over MCA-Universal, they did nothing to undermine the unquestioned authority of Universal’s legendary—and all-Jewish—management triad of Lew Wasserman, Sid Scheinberg and Tom Pollack. [5]

Medved added that most of today’s movie moguls graduated from Ivy League colleges, “where Jews are vastly over-represented—just as they are in Hollywood.”

He says that nepotism plays a role exemplified with Samuel Goldwyn Pictures being run by the son of founder Samuel Goldwyn and a third generation, Tony Goldwyn, is waiting in the wings to take over.

This dynastic tendency in American entertainment certainly is a factor in the continued prominence of the Jewish role. [5]

While Hollywood never stops portraying whites as degenerate criminals at every conceivable occasion, Jews are always portrayed as heroes, according to Medved:

Jewish writers and directors employ unquestionably flattering depictions of Jews for audiences to react with sympathy and affection. [5]

Interestingly, Medved also pointed out that the general public was aware of the Jewish control of Hollywood, and that this degenerative effect was the cause of resentment:

Poll after poll, taken over the past 10 years, shows that the public believes this industry is more firmly associated with Jews than any other business in the world. That it is almost universally viewed as a destructive force in our society should be of concern. [5]

And he ends with this significant remark:

The combined weight of so many Jews in one of America’s most lucrative and important industries gives the Jews of Hollywood a great deal of political power. They are a major source of money for Democratic candidates. The industry’s informal patriarch, MCA chairman Lew Wasserman, wields tremendous personal clout in state and national politics. So do Barbara Streisand, Norman Lear and others. [5]

Once again, Medved has never had his “employers spoken to” or had his career derailed by the Foxmans of the world—simply because he is Jewish and allowed to say these things.

There is even a commercially available book about the Jewish control of Hollywood, written by the Jew Neal Gabler, titled An Empire of Their Own: How the Jews Invented Hollywood. 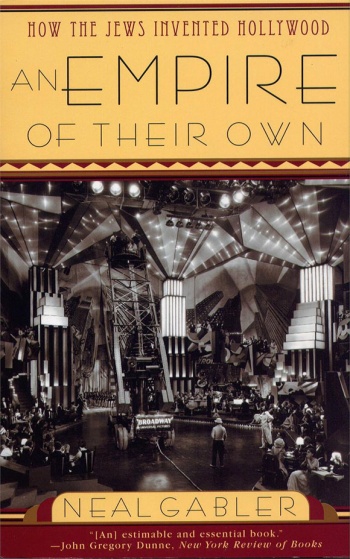 An Empire of their Own Book dust jacket

Gabler is a Senior Fellow at the USC Annenberg Norman Lear Center and is a cohost along with Medven of the American film review show, Sneak Previews (which ran for over two decades on the Public Broadcasting Service).

His 512 page book details precisely how Jews have taken over and run Hollywood. On page 263, Gabler even describes this takeover as the work of a “Jewish cabal.”

On the first page of his book he states how the industry was “supervised” by Jews, goes on to detail the workings of the “Jewish network”, and specifies how the studios “preferred to deal with other Jews”(p.272).

“Those goyim!” Harry Warner would yell in derision, or “He’s a nice fellow for a goy” a Jew might say but only in their inner sanctums, when they were safe among fellow Jews, and only verbally. (p.280).

According to the book’s official description, this “wonderful history of the golden age of the movie moguls” (Chicago Tribune ) is a provocative, original, and richly entertaining group biography of the Jewish immigrants who were the moving forces behind the creation of America’s motion picture industry.

That subtitle may inspire in some readers waves of ethnic pride, and in others waves of ethnic revulsion, but the point of this book is that its claim of origin is quite literally true. And what makes it an interesting read for political types is the way it demonstrates that no matter how much the founding Hollywood moguls and their successors tried to peddle an idealized, escapist form of entertainment, bubbling up under and around their every project was ideology, racism, ethnic prejudice, class friction, domestic and international politics and all the other raw, seething stuff that distinguishes this country from all others. In Gabler’s hands, the Industry draws a picture of American political history in spite of itself. [6]

Once again, the Jewish Supremacist hypocrites like Foxman did not “speak to Gabler’s employers” or otherwise smash his career.

The book was adapted into a documentary movie in 1998. As usual, the film has two titles, distributed to different markets: Hollywoodism: Jews, Movies and the American Dream (original title for A&E) and Hollywood: An Empire of Their Own (title for video/DVD).

This film, once again made by Jews for Jews, was not the subject of the ADL’s venom. Instead, this exposé of Jewish control of Hollywood won an award for “Best Jewish Experience Documentary” at the 1998 Jerusalem Film Festival. [7] 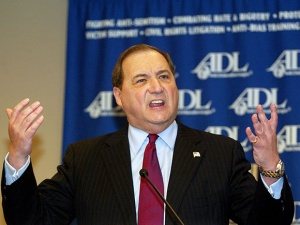