Document:Jihadism and the Petroleum Industry 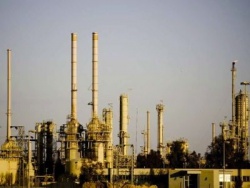 Translated from French by Roger Lagassé
Image right: The Baiji Refinery in Iraq.

Confirmation of the scenario laid out in a prescient article by Sharmine Narwani in July 2013: Arabs Beware the Small States Option. The Usaian empire is nothing if not flexible in the relentless pursuit of its hegemonic agenda. The unmitigated catastrophe (for its population) of the Iraq war has clearly failed to fully deliver for the criminals who so ruthlessly planned and prosecuted it. This provides shrewd insight into plan B.

While the Western media portray the Islamic State in Iraq and the Levant as a group of jihadists reciting the Qur’an, the ISIL has started the oil war in Iraq. With the help of Israel, it has cut off Syria’s supply and guaranteed the theft of oil from Kirkuk by the local government of Kurdistan. The sale will be assured by Aramco who will camouflage this diversion as increased "Saudi" production.

For the Atlanticist press, the Islamic State in Iraq and the Levant (ISIL). which has just invaded the north and west of Iraq. is a group of jihadists led by their faith, the Koran in one hand and a Kalashnikov in the other. For those who have suffered their abuses, including in Syria, it is a private army of mercenaries, composed from the four corners of the Earth and managed by American, French and Saudi officers - dividing the region to allow easier control by the colonial powers.

If one conceives of members of the ISIL as armed believers, we cannot imagine dark material interests behind their attack. But if we admit that these thugs are manipulating religion to give the illusion that Allah blesses their crimes, we must be more attentive.

While shedding crocodile tears for the thousands of Iraqi victims of this offensive, the Atlanticist press decries the consequences of this new conflict for oil prices. Within days, the barrel rose to $115, that is to say the level of September 2013. Markets were concerned about the fight for the Baiji refinery near Tikrit. In reality, this refinery produces only for local consumption, which could quickly run out of fuel and electricity. Rising oil prices is not due to the interruption of Iraqi production, but the disruption of deliveries. It will thus not last as markets are in surplus. 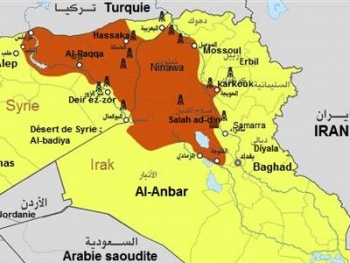 In brown: The Zone Invaded by the ISIL (As-Safir map)

Saudi Arabia has announced that it will significantly increase its production to compensate for the reduced supply due to the marketing ban by ISIL. But experts are skeptical and point out that the kingdom has never produced more than 10 million barrels per day.

The Atlanticist press, which denies the sponsorship of NATO, learnedly explained that the ISIL suddenly became rich by conquering oil wells. This was already the case in northern Syria, but it had not noticed. The western press had tried to deal with fighting between the al-Nosra Front and the Islamic Emirate as a rivalry exacerbated by the "regime", while they sought to monopolize the oil wells.

However, a question arises to which the Atlanticist media and the Gulf is still has no answer: how can these terrorists sell oil on the international market so monitored by Washington? In March, the Libyan Benghazi separatists had failed to sell the oil that they had seized. The U.S. Navy intercepted the tanker Morning Glory and had returned it to Libya. [1]

If the Frente al-Nosra and the ISIL are able to sell oil on the international market, they are authorized by Washington and are linked to storefront oil companies.

Chance has it that the annual world congress of the oil companies was held from June 15 to 19 in Moscow. We thought there would be talk of Ukraine, but there the issues were Iraq and Syria. It was learned that the oil stolen by the Frente al-Nosra in Syria is sold by Exxon-Mobil (the Rockefeller firm that rules Qatar), while that of ISIL is operated by Aramco (USA / Saudi Arabia ). Note in passing that during the Libyan conflict, NATO authorized Qatar (that is to say, Exxon-Mobil) to sell oil from the " territories liberated by al-Qaeda”.

We can therefore read the current fighting, as all those of the twentieth century in the Middle East, as a war between oil companies. [2] The fact that the ISIL is financed by Aramco is enough to explain why Saudi Arabia claims to be able to compensate for the decline in Iraqi production: the kingdom would just put its stamp on the stolen barrels to legalize them. 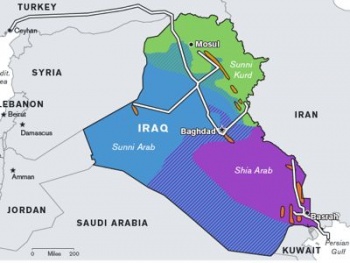 The ISIL breakthrough allows it to control the two main pipelines: the one exiting toward Banias to supply Syria while the other transporting crude to the Turkish port of Ceyhan. The Islamic Emirate has interrupted the first, causing additional power outages in Syria, but strangely, it allows the second to function.

This is because this pipeline is used by the local pro-Israel Kurdistan government to export the oil it just stole from Kirkuk. However, as I explained last week [3] , the ISIL attack is coordinated with Kurdistan to cut Iraq into three smaller states, according to the map reshaping "the Greater Middle East" established by US Staff in 2001, that the U.S. military failed to win in 2003, but Senator Joe Biden had adopted by Congress in 2007. [4]

Kurdistan has begun its oil exports from Kirkuk via the ISIL-controlled pipeline. Within days, it was able to load two tankers at Ceyhan, chartered by Palmali Shipping & Agency JSC, the company of billionaire Turkish-Azeri Mubariz Gurbanoğlu. However, after the al-Maliki government, which has not been overthrown by Washington, issued a note denouncing this theft, none of the companies usually working in Kurdistan (Chevron, Hess, Total) dared to buy this oil. Failing to find a buyer, Kurdistan has declared its readiness to sell its cargo at half price at $ 57.5 per barrel, while continuing its traffic. Two other tankers are being loaded, always with the blessing of the ISIL. The fact that traffic continues in the absence of a market shows that Kurdistan and the ISIL are convinced that they will succeed in finding a buyer, indicating they have the same state supports: Israel and Saudi Arabia.

The possible division of Iraq into three will not fail to reshuffle the oil cards. In the face of the ISIL breakthrough, all oil companies have reduced their staff. Some more than others: this is the case of BP, Royal Deutsch Shell (which employs Sheikh Moaz al-Khatib, the geologist former president of the Syrian National Coalition), Türkiye Petrolleri Anonim Ortaklığı (TPAO) and Chinese companies (PetroChina, Sinopec and CNOOC).

So the losers are the British, the Turks, and especially the Chinese, who were by far Iraq’s largest customer. The winners are the U.S., Israel and Saudi Arabia.

The stakes are thus unrelated to a fight for the "true Islam."