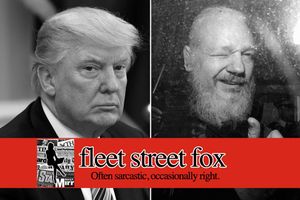 
Wikispooks Comment This is a good example of pursuit by a commercially-controlled media outlet of a favoured official narrative meme - in this case a patently absurd variation on the tired old "Russia did it" one. It is replete with factual errors, not least of which is the contention that Assange would have been at "far less risk of extradition" to the US were he to have returned to Sweden. A close second is that the whole extradition charade has been massaged to protect Trump from the (thoroughly discredited) Russiagate proceedings - and especially so in light of the fact that the US Grand Jury case against Assange was initiated several years before Trump's presidential candidacy was even mooted AND before the spurious Swedish allegations against him.

Julian Assange is no journalist, and no friend of journalists. But the Wikileaks founder is being extradited for the wrong thing. Is it possible the Australian hacker is being protected from testifying against Trump? It's a more likely tale than him being a journalist, says Fleet Street Fox.

He has worked with a government that murders journalists, and helped to empower a president whose supporters want hacks to be hanged.

Hats off to his lawyers for trying it, though, as part of his argument against extradition to the US on 17 charges of espionage and one of computer hacking.

But they are the wrong charges. And it is the dates that niggle.

Just like everyone with a social media account, Assange is a publisher. Unlike most, he's published huge amounts of stolen data.

In 2010 that publication created a political firestorm. It exposed extra-judicial killings, torture, war crimes. It was valuable information, with a strong public interest.

But along with it were the names of rape victims. Information about secret agents operating in hostile territory, such as Russia and China. Identities of homosexuals in Saudi Arabia, private medical records, information about children.

Assange published it all citing a pathological belief about openness and democracy. He applied this to everyone except himself, Donald Trump, and Vladimir Putin.

He tried to shut up journalists publishing unwelcome news about him and his organisation. He hid from questions about his sex life until the women who complained of rape and sexual assault in Sweden could no longer be heard. And worst of all, he betrayed his source.

Chelsea Manning was a disillusioned US Army private called Bradley when she began chatting online to Assange. She ended up handing him 750,000 secret documents; he is accused of helping her to crack a password to access some of them.[2]

Manning was jailed in 2013 after admitting her involvement to another friend. She was given a 35-year sentence, the longest for such crimes in US history.

On January 12, 2017, Assange offered to submit to extradition if she was treated with clemency. Four days later, Barack Obama commuted her sentence, and she walked free.

Assange did not submit to extradition. He stayed where he was, hiding in the Ecuadorian embassy in London.[3]

Last year, Manning was called to give evidence to a Grand Jury investigating Wikileaks. She refused to answer questions, on the principle there was nothing new in them. She was jailed twice for contempt, and is still in prison where she is also being fined $1,000 a day for, effectively, protecting the man she was a source for.

But why is this Grand Jury investigating a decade-old crime for which someone has already been court-martialled? The dates, again, are intriguing.

In May 2017, 5 months after Assange promised and failed to go to the US, Swedish prosecutors dropped the last claim against him.[4] The same month, special counsel Robert Mueller was appointed to investigate alleged Russian interference in the election that saw Donald Trump take power.

Two years later, on 22 March 2019, Mueller sent his report to Attorney General William Barr. On March 24, Barr published a 4-page letter putting a positive spin on the report's conclusions. And on April 11, Assange was forcibly removed from the London embassy in which he had been hiding.[5] A Kremlin-backed Russian news agency was the only outlet to get exclusive footage of the event.

A week later, the US Department of Justice published a fuller, but redacted, version of the Mueller report. It stated Russian intelligence agents had sent hacked Democrat emails to Assange in July 2016, via his computer in the embassy.

US courts have heard evidence that Trump's long-time adviser Roger Stone was considered a conduit between the presidential campaign and Wikileaks. In August, Stone wrote that he had "an idea... to save Trump's ass".

On 7 October 2016, a videotape dropped featuring Trump's boasts that "when you're a star, you can do anything... grab 'em by the pussy". Less than an hour later, Wikileaks published the stolen emails.[6]

In August 2018, a US congressman called Dana Rohrabacher visited Assange in the embassy. The politician is known as an outspoken supporter of Putin. Assange's lawyer claims he offered a pardon from Trump, if he ensured Russia was not implicated in the leak. Rohrabacher admits making the offer, but says Trump knew nothing of it.

And just a few months after all this became known, Assange was seized, jailed, and the extradition process began.

Yet none of the charges relate to alleged 2016 election interference.[7]

And, if the extradition is successful, he cannot be tried over, or compelled to answer questions about, Russian interference in Trump's rise to power.

And suddenly, things happening one after another on opposite sides of the Atlantic Ocean look... convenient.

If Assange was a journalist, he would have gone after the Russian government, and Trump's, with the same gusto he went for Obama and Hillary Clinton.

If he was a man of honour, he'd go to the US to relieve Chelsea Manning of her imprisonment, and at the very least say thank you.

If he was interested in avoiding extradition to the US, he'd have gone to Sweden to answer the charges that were unlikely to see a conviction, and where he had far less chance of being extradited.

But if he really WERE a Russian intelligence asset... well, then it all makes sense.

It makes sense that he peddled fake news, that he abandoned Chelsea Manning, and that one of the most evil governments on Earth avoided the attentions of his army of hackers.[8] It's clear how the Kremlin caught his brief moment of freedom on camera, and why the Trump administration acted so quickly.

His extradition is not guaranteed. The UK-US treaty forbids handing people over for political reasons, and his much-discussed maximum sentence of 175 years is less likely than Meghan Markle making a curtsey.

If he does go to the US, lawyers could spend years proving a fair trial is impossible in a country where the president tweets his sentencing preferences, as well as ill thought-out zingers like "I love Wikileaks".[9] Assange, in short, has a better-than-evens chance of not going to jail at all. He may turn out to have done more time in Ecuador.

The charges that are recent, that are unanswered, for which there is lots of evidence and in which there can be no claim of journalism or the public interest, are the charges from which this legal farce coincidentally protects him: that of helping a bad man into the White House, at the behest of a worse man in the Kremlin.