Document:Labour ‘gagging orders’ put in place by McNicol – and gave hundreds of £1000s to allies 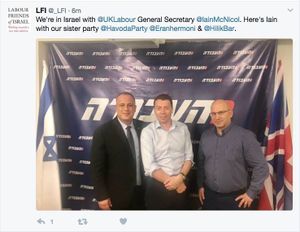 The programme, along with the BBC’s trailers for it and most of the Establishment media after it, made much of the ‘courage’ of the former staff in breaking ‘non-disclosure agreements’ (NDAs) to speak to Panorama – and criticised Labour for imposing NDAs in the first place.

But the SKWAWKBOX has learned that those NDAs were overseen by none other than Iain McNicol, before his departure from his position and before current General Secretary Jennie Formby took up her duties.

And the process of signing the NDAs enriched departing staff loyal to McNicol – to the staggering tune of hundreds of thousands of pounds.

The SKWAWKBOX understands that last week’s meeting of Labour’s Shadow Cabinet – which included deputy leader Tom Watson – was told by Ms Formby that:

She first became aware of confidentiality agreements being used when she was first appointed. Hundreds of thousands of pounds had been paid to former staff who had resigned before her arrival. When she asked why, she was told it was because they had been required to sign settlement agreements that contained confidentiality clauses and that these had been in use for many years.

Ms Formby also informed Shadow Cabinet attendees that she asked for them to be reviewed and following advice from external solicitors new standard terms were drawn up. These new terms contained transparent confidentiality provisions and specific exceptions for protected disclosures.

Iain McNicol was contacted for comment and was also asked why he had not disclosed his involvement in the NDAs to the programme and whether he considered his failure to mention it had compromised his credibility. He had not responded by the time of publication.

The media have made ‘Labour’s gagging orders’ a key plank in their attack on the party, as part of the innuendo that Labour has something to hide on the issue of antisemitism and is trying to hide it.

McNicol was involved in the suspension of thousands of Corbyn-supporting Labour members on spurious grounds during successive leadership contests[3] and was a key witness in last week’s Panorama.

That those same media have failed to mention it in their coverage is a major scandal.

It appears the Panorama programme doing a hatchet job on Jeremy Corbyn and Jennie Formby is unwinding even more. The programme made a big thing of NDAs (Non-disclosure agreements) that the ex-Labour employees were supposedly ‘forced’ to sign before leaving. I must admit this seemed strange to me at the time the programme aired because NDAs are normally signed BEFORE employment starts (and would a condition of employment when used) and there would be nothing to stop an employee refusing to sign just before leaving. So I wondered why they DID sign.

It now appears these ex-employees were paid hundreds of thousands to ‘sign’ these NDAs (not mentioned in the programme), and this was arranged by the previous General Secretary Iain McNicol who also appeared on the programme. Yes, Jennie Formby was NOT involved in these NDAs and it appears they were a means of giving these anti-Corbyn employees (like McNicol himself) a ‘golden handshake’.