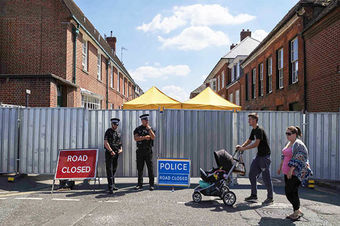 As if the Skripal affair was odd and ridiculous enough, this latest chapter in the Novichok thriller series seems even more unlikely and outlandish than its previous iteration. As expected, British officials are all lining-up with official statements of righteous indignation, each blaming Russia for another supposed “chemical attack” on British soil.

Early this week we learned that Dawn Sturgess, a 44-year-old mother of three from Amesbury near Salisbury, died after coming into contact with what the media are claiming is the same ‘deadly military-grade nerve agent’ that was supposed to have killed (but didn’t) former Russian spy Sergei Skripal and his daughter Yulia back in March.

We’re told that both Sturgess her acquaintance and Charlie Rowley, 45, had taken ill last week in Wiltshire.

Naturally, UK Defence Secretary Gavin Williamson took the opportunity to look and talk tough on Moscow, but more importantly to try and advance the government’s shaky ‘Novichok’ conspiracy theory, as he implored Parliament on Monday:

“The simple reality is that Russia has committed an attack on British soil which has seen the death of a British citizen …. That is something that I think the world will unite with us in actually condemning.”[1]

Meanwhile, the media is littered with images of coloured Hazmat suits and other impressive bio-gear, as the government deploys some 100 detectives,[2] all “working round the clock” to try and come up with a suitable story as to how exactly Sturgess and Rowley were contaminated by the ‘deadly military-grade nerve agent’ known as Novichok. Incredibly, the UK media have already claimed this WMD attacked was delivered by way of a discarded cigarette butt.[3]

At no point however, will the state or its media organs ask the obvious question: does this event have anything to do with the UK and US the government’s multiple biological and chemical facilities located right next door?[4]

As reporter Kenny Coyle points out however, none of the reporting on this incident actually adds up, not to mention there is a third victim which has been airbrushed from the media’s narrative for some reason.[5] Who is this person? Much more worrying however, is the disturbing coordination between the mainstream media, the intelligence services and the military. Did you know the BBC diplomatic and defence correspondent Mark Urban was working with Sergei Skripal up to a year before the incident in Salisbury? What was the BBC doing with Skripal beforehand, and what do they know? Normally these questions should raise alarm bells, but so far they have not…

Tranquil rural Wiltshire is now the epicentre of Cold War 2.0 it seems. The dramatic events in Amesbury at the start of the month are once again creating a frenzy of media speculation and confusion, if not outright disinformation.

However idyllic this spot of the English countryside might appear, the Salisbury/Amesbury area is ground zero for Britain’s chemical, biological, radiological and nuclear (CBRN) warfare infrastructure.

Amesbury’s closeness to the Defence Science and Technology Laboratory (DSTL) at Porton Down has been noted in some media reports, although usually with the implication that the location is a stroke of good luck in allowing super-swift scientific identification of the mysterious “Novichok” substance that apparently poisoned Charlie Rowley and Dawn Sturgess.

Less attention has been paid to the fact that the area is also home to the Defence Chemical Biological Radiological Nuclear Centre at RAF Winterbourne Gunner, Salisbury. This was originally established in 1926 as the Chemical Warfare School.

“As well as military training, the Defence CBRN Centre also supports civilian response in partnership with the Health Protection Agency and Department of Health.”

Amesbury is little more than 10 minutes away by car.

Also handily located nearby is Boscombe Down air base. The site is currently run, managed and operated by QinetiQ, a private military company created out of the breakup of the Defence Evaluation and Research Agency (DERA​) in 2001 by the Ministry of Defence.

The other part of the former DERA is Porton Down’s DSTL. QinetiQ’s US arm produces a range of military robots. The QinetiQ Talon Hazmat is specially designed for the chemical weapons market and the company boasts it can identify “over 7,500 explosives, precursors and chemicals.”

At £4.5 million apiece, this is big business and with an increasing media focus on CBRN threats, real or imagined, this is very good news for the company’s shareholders, who snapped up its DERA parent for a song.

It’s in this neck of the woods that we are asked to believe that a Russian agent or agents skilfully avoided all detection and identification and managed to attack the Skripals by smearing a doorknob.

These agents then left behind a chemical trail that could be traced all the way back to Moscow, rather than disposing of the substance securely.

All this within miles of a cluster of NATO’s key chemical weapons facilities.

Then there’s the issue of timing.

“The latest twist comes at a time when Russia’s image has been burnished by a successful staging of the World Cup. More significantly though, it comes less than a week before a NATO summit in Brussels to discuss how the transatlantic alliance should deal with Russia and ahead of Donald Trump’s meeting with Vladimir Putin.”

The case might not cause quite so much scepticism if we only had the inconsistencies and absurdities of the Skripal case to contend with.

According to an initial statement on Wiltshire Police’s website:

“Emergency services were called to an address in Muggleton Road on Saturday evening after a man and woman, both in their 40s, were found unconscious in a property.

“They are both currently receiving treatment at Salisbury District Hospital and are both in a serious condition.

‘At this stage we believe the two patients have fallen ill after using a contaminated batch of drugs, possibly heroin or crack cocaine’.”

This first police statement suggested that both victims were hospitalised at the same time, on Saturday evening and that it was being treated as a Class A drug-related incident.

“The ambulance service was called to Muggleton Road on Saturday (June 30) at about 10.15am where a 44-year-old woman had collapsed. She was taken to hospital.

“And at about 3.30pm, an ambulance was called to the same address where a 45-year-old man had also fallen ill. The man was taken to hospital and Wiltshire Police were informed.”

Video footage shown by BBC and Sky News claimed to show Rowley being put in an ambulance. One pictured paramedic was wearing a full hazmat suit, which is an uncommon response to an emergency call for what was supposedly a suspected drug overdose.

The website of Salisbury radio station Spire FM reported that:

“An incident in the Kings Gate area of Amesbury on Saturday evening (June 30) is thought to have been a drug-related medical episode.

“More than 10 emergency vehicles arrived on the scene from police, ambulance and fire service.

“A number of roads around the estate were closed for a time, but reopened within a couple of hours.

“One patient has been taken to Salisbury District Hospital by land ambulance.”

“The ambulance service was called at about 6.20pm and the fire service were called just before 7pm.

“Witnesses told the Journal that a number of residents were evacuated from their homes by firefighters.

“They also reported seeing people in hazmat suits at the scene.

“Witnesses also said about eight fire engines along with police and ambulance vehicles as well as specialist incident response vehicles were also at the scene.”

“A police spokesman said: ‘At the moment it is not a police incident. It is being led by the fire and the ambulance. It appears that there are three people who have taken drugs and had a medical incident. They have all been taken to hospital’.”

“Neighbours tell me the peace at this usually quiet new estate in Amesbury was broken at around 6.30 pm on Saturday evening.

“It was hot and many were out BBQ’ing when they heard sirens and saw flashing lights as first ambulances then the fire brigade and police arrived at Muggleton Road.

“They saw seven fire engines and fire officers wearing Hazmats at the scene. The house was cordoned off and the word here was that this was a suspected drugs overdose,” Callan reported from the scene.

So according to three local media reports, the ambulance was called much later than the times given by Basu. Although this was supposedly being treated as a drugs-related incident, fire crews were called, residents evacuated, roads closed, hazmat personnel deployed and specialist incident response vehicles, some from as far away as Swindon, were sent to the scene. Some details differ.

Three people were in the property, according to the local police version. Presumably this was Rowley, Sturgess and Hobson, with the police claiming that all three had been taken to hospital, but only one was confirmed to the media by the Ambulance Service as being hospitalised.

This simply does not add up.

The willingness of the Establishment media not only to echo official narratives but to help create them is impressive.

From the BBC to The Guardian, the Establishment media presents a neutral narrative that would not be so readily accepted if put forward directly by government officials or ministers.

Yet the interlocking of media, military and political elites is also now on show.

The Amesbury event apparently provides a new sample of the substance, helpfully kept in a carelessly discarded container in a public space, safe from the elements.

This is presented as the final missing piece of the puzzle that had so far eluded one of the biggest peacetime counter-terrorism hunts.

BBC diplomatic and defence correspondent Mark Urban took to the air on Newsnight this week to outline what may become the official standard explanation for the whole Novichok case.

Yet only now has Urban revealed that he had in fact been meeting secretly with Sergei Skripal over a year ago:

“I met Sergei on a few occasions last summer and found him to be a private character who did not, even under the circumstances then prevailing, wish to draw attention to himself.

“He agreed to see me as a writer of history books rather than as a news journalist, since I was researching one on the post-Cold War espionage battle between Russia and the West.

“Information gained in these interviews was fed into my Newsnight coverage during the early days after the poisoning. I have not felt ready until now to acknowledge explicitly that we had met, but do now that the book is nearing completion,” Urban wrote on BBC online.

Urban has strong military links, penning nearly a dozen books on British army units over the years, while collecting his BBC salary.

He is a former second lieutenant in the fourth Royal Tank Regiment, which until 1993 was garrisoned in Tidworth, Wiltshire, 15 minutes or so from Amesbury.

Leaving aside Urban’s obvious contractual conflict of interest and his commitment to writing a spy book supposedly overruling his duty as an impartial public broadcaster, it is a bombshell to find that for four months the link between Skripal and a senior BBC journalist with intimate links to the British military was kept secret from viewers.

How much did Urban’s BBC managers know of his extra-curricular activities?

Did Skripal’s MI6 handlers introduce Urban to him, did they arrange his meetings, vet or coach Skripal’s answers?

It raises once again the question of just how cosy the links are between British intelligence and many senior employees of Auntie Beeb.

And why is this information only being revealed now? Because of a looming and now, no doubt, ultra-lucrative book deal for Urban or instead to bolster the case that Skripal was indeed a likely target for Russian assassination due to continuing work for British and NATO intelligence services?

More and more questions, but don’t expect the Establishment media to ask, never mind answer, them.