★ Start a Discussion about this document
On Death and Derivatives

Early this morning, Gabriel Magee, a Vice President of CIB (Corporate and Investment Banking) Technology at JP Morgan jumped to his death from the top of the bank’s 33 story European Headquarters in Canary Wharf. [2] As a VP of CIB Technology Mr Magee’s job would have been to work closely with the Bank’s senior Risk Managers providing the technology which monitored every aspect of the bank’s exposure to financial risk.

These deaths could well be completely unrelated and just terribly sad for their respective families. On the other hand neither of these men had any obvious problems and both were immensely wealthy. So why would two senior bankers commit suicide within a couple of days of each other?

One place to start is to note that JP Morgan Chase had, at the end of 2012, a mind boggling, but only silver medal, $69.5 Trillion with a ‘T’ gross notional Deriviatives exposure. [3] While the gold medal for exposure to Derivative risk goes to …Deutsche Bank, with $72.8 or €55.6 Trillion Gross Notional Exposure. Gross Notional means this is the face value of all the derivative deals it has signed. Which the bank would be very quick to tell you would Net Out to far, far less. Netting Out, for those of you who do not know just means that a bet/contract in one direction is considered to balance or cancel out a similar sized bet/contract betting the other way. But as I wrote last back in spring 2012:

...this sort of cancelling out is fine on paper but in reality is more akin to people trying to swap sides in a rowing boat. [4] [5] 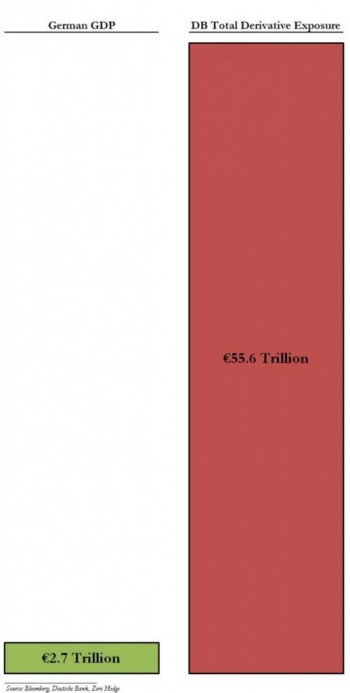 Both of the men who killed themselves were intimately concerned with judging and safeguarding their bank from risk.

To give you an idea what sort of risk that size of a derivatives book is consider that the entire GDP of Germany is €2.7 Trillion. Remember that Derivatives are what Warren Buffet dubbed “weapons of financial mass destruction.”

Next question might be, when do these weapons become dangerous? The answer obvioulsy varies in accordance with the type of derivative you are considering. One huge group of derivatives that both JP Morgan and Deutsche both deal very heavily in are currency and interest rate swaps. They become dangerous when there are large moves in currency values and interest rates.

At the moment The Tukish Lira has been in free fall for days. The Turkish central bank tried to defend it and could not stem an unstoppable tide. It then stunned everyone by raising its over-night lending rate (the interst rate it charges to lend to banks over-night) from 4.25% to 12 %!

This did not work either and today the Lira continues to be in crisis, as is the whole Turkish stock market.

The Hungarian Florint is also crashing. [6] As is the entire Argentinian economy. The Peso fell 10% in a single day recently. At the same time there is massive uncertainty surrounding Ukraine as there is also surrounding the interest rates and stability of South Africa.

So imagine you are a large bank with huge derivatives business much of which covers bets in your equally large Foreign Exchange business. Essentially that boat in which you are hoping you can ‘net out’ about 70 Trillion dollar’s worth of derivatives positions is now being bounced about by several large storms.

Many of those derivatives contracts would have been entered into during Mr Broeksmit’s tenure at Deutsche, while Mr Magee would have been overseeing and advising on his bank’s risk exposure as it swayed about over at JP Morgan.

All of which brings to mind yet another banker who recently fell to his death.

Just under a year ago, in March of 2013, David Rossi, head of communications at one of Itay’s largest and most catastrophically insolvent banks, Monte dei Paschi, fell from the balcony of his third story office at the bank’s head-quarters. How a man who isn’t drunk and who, as far as I am aware, left no suicide note just ‘falls’ from a balcony is a mystery. But the Italian authorities, I have no doubt, did a bang up job.

It turns out that,

Monte dei Pasche…had engaged with shady derivatives deals with Deutsche Bank to cover up hundreds of millions of euros in loses, and then employed some creative accounting to hide the trades from share holders and the public. [7](emphasis added).

Now what I find strange about this man’s death is that as Head of Communications he would not have done any banking himself. Therefore, he would not have been guilty of any wrongdoing. So why would he kill himself? It seems to me the worst that could have happened to him is that he became aware of rather serious wrongdoing that other people and other banks even, might have not wanted brought to light….

And then I remembered one more death. Pierre Wauthier, the former Chief Financial Officer (CFO) of Zurich Insurance Group hung himself last year, at his home. Now this death you might think has no possible connection with the others. In fact it has two. Both are, as with the rest of what I freely admit is a speculative piece, circumstantial.

The CEO of Zurich Insurance group at the time of Mr Wauthier’s suicide was Josef Ackermann, former CEO of Deutsche Bank. Mr Ackermann resigned shortly after it was revealed that Mr Wautheir, in his suicide note, had named Mr Ackermann. According to Mr Wauthier’s widow it was Ackermann who had placed her husband under intolerable strain. [8] Of course we don’t know what the issue was that caused the ‘intolerable strain’. But let’s look a little closer at what tied these two men together.

Mr Ackermann stepped down as CEO of Deutsche Bank in 2012 after ten years at the helm. During that time he had transformed Germany’s largest bank from a large but slightly dull national player into one of the very largest and most agressive of the global banks. One of the ways Ackermann had grown Deutsche so spectacularly was to make it the world’s largest player in the derivatives market. Nearly all of that 72 Trillion dollars’ worth of derivative exposure was accumulated under his leadership.

Mr Ackermann had built a derivatives position 18 times larger than the GDP of Germany itself.

A year and a half after Mr Ackermann took over at Zurich Insurance Group, Zurich announced it was going to start offering banks a way of holding less capital against their risky assets/loans by offering to insure or ‘buy’ the risk from them. This is know as Regulatory Capital Trade. As one of the architects of the trade was quoted at the time, "We are looking at products where banks would buy insurance for their operational risks issues. These are normally risks that are not covered by traditional insurance.”

This new insurance venture was, on the one hand, in response to the European regulators insisting that banks had to hold more capital against their risky assets and on the other, a result of the dire need of Insurers to find products that could yield them a profit. The trade is a classic result of a period of extended low interest rates where traditionally safe investments like Soveriegn bonds and vanilla loans and securities just don’t pay enough to cover insurers’ needs let alone let them make a tidy profit. In other words those insurers who understood what banks were exposed to and were willing to take the risk on themselves – because they thought they were cleverer – could find yield where others feared to tread. And of course one of the largest pots of risky assets on bank books is derivatives. All those lovely foreign exchange bets and interest rate bets, and derivative trades which underpin the rapidly growing European ETF market (in which guess who is a massive player? Yes, that’s right, Deutsche) – they would all have levels of risk the banks would love to off-load.

Holding more capital against risk might be prudent but it is hell on bank growth and bonuses. Regulatory Capital Arbitrage, is how you game (quite legally, of course) that particuar regulation. The bank gets to keep the underlying asset, while the risk is ‘sold’ to or insured by (depends on how you account for it at both ends) someone else. In this case Ackermann’s Zurich Insurance Group.

In some ways it was a creative move – in the way finance is creative , like making a better land mine I suppose – since Zurich already ran the world largest derivative trading exchange, Eurex. With the new trade Zurich would not just be running the exchange but would now become a major player in the risk trade. Of course this is fine so long as the risk never materializes. Which brings us back to the present spreading turbulence in markets from Ukraine, to Argentina and Turkey. It is also worth noting Zurich also offers insurance against about 50 or so emerging market banks going under. Might not seem quite so safe a market to be in just at the moment.

As Chief Financial Officer Mr Wauthier would have had to be on side with Mr Ackermann about the wisdom of this bank-risk insurance trade.

Now I realize, as I said above, that this is all circumstantial and speculative. But derivatives are, as Warren Buffett said, very dangerous. Deutsche is sitting on the world’s biggest pile of them and J P Morgan the second biggest pile. And right now global events are making those risks sweat. When HSBC tries to limit cash withdrawals and so does one of Russia’s largest banks then something somewhere is not healthy. We are , I think, circling around another Morgan Stanley moment. [9]