Document:Outrage over killing of journalists is essential 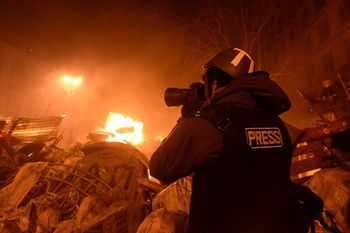 Who ordered the killings of Anna, Marie and Jamal?

In the week when the world watched Jim Acosta be attacked by the American president, Muhammad Idrees Ahmad looks at the the threat to journalism – and democracy – all over the world.

It was rare for Marie Colvin to be daunted by danger. During Lebanon’s “war of the camps”, she once ran a gauntlet of sniper fire to get into the Burj al-Barajneh refugee camp. Her reporting on the Palestinians trapped inside helped end the brutal siege. In East Timor in 1999, she witnessed almost the entire UN staff and 22 of her fellow journalists evacuate a besieged UN compound but refused to abandon the 1,500 women and children huddling inside, facing certain death. Her reporting spurred international action and the civilians were finally given safe passage. On her final assignment in Syria, Marie crawled through nearly three miles of a drainage pipe to get to the besieged enclave of Baba Amr where she knew regime soldiers had orders to execute her. She understood the danger and kept reporting until the regime used her satellite signal to target and kill her.

But there was moment that gave even the fearless Marie Colvin pause. In 2002, during the Israeli assault on Jenin, a group of women and children had begged Colvin to accompany them back to their homes. They hoped that the presence of a westerner would restrain the Israelis. But the Israeli gunfire was too indiscriminate and having lost an eye to trigger-happy soldiers in Sri Lanka, Colvin’s confidence had suffered. She demurred. Her fixer, Imad Abu Zahra, accompanied the women and children instead. Two months later, Abu Zahra was killed by an Israeli armoured personnel carrier (APC) at close range while taking photos in a Jenin street.

Last month, when the Saudi journalist Jamal Khashoggi was killed at the Saudi embassy in Istanbul, the cynics were quick with whataboutery. Based on their political predilections, they cited situations where more were being killed, most notably in Yemen. And, indeed, the Saudi actions in Yemen are criminal and starving millions with an imposed famine is an outrage. But this is not a zero-sum game: Khashoggi wasn’t stealing from Yemen’s coverage. If there was more attention being paid to Khashoggi, it is because in wars — even just wars, which this one certainly isn’t — people are expected to act criminally; but no one expects to visit an embassy and be beheaded with a chainsaw. The unusual coverage of Khashoggi’s killing reflects its unusual circumstances. And anyone who begrudges the attention is demonstrating a deficit of humanity, not a surplus of concern for Yemenis. That a journalist’s killing has sparked international outrage is something to be welcomed.

In the west we have become complacent about the protections journalists enjoy. Journalists can report on the crimes and misdeeds of presidents without expecting a bullet in the back (even the vindictive Richard Nixon was constrained by laws and institutions). Indeed, journalists are rewarded for standing up to power (or even appearing to do so). Bob Woodward & Carl Bernstein are rightly celebrated as heroes; Glenn Greenwald won a Pulitzer, an Oscar, and a half million dollar salary for reporting on the NSA leaks. But in Russia, Anna Politkovskaya and Natalya Estemirova were received with bullets in their head; Kashoggi had his neck sawed off in Istanbul; and Raqqa is Being Slaughtered Slowly (RBSS) members had their families executed by ISIS on camera.

But the privileges we enjoy through the sacrifices of others can slip if we take them for granted or fail to defend them. This is a dangerous time to be a journalist. From Russia, Bulgaria, Malta, Pakistan, Turkey, Syria, Ukraine, Bangladesh to Myanmar, journalists are facing grave threats. Stakes for journalists in the rest of the world are higher than they are for us. We enjoy institutional protections that they don’t. For us, an investigation into power and corruption is an analytical and logistical challenge; for them it is also a mortal one. Out there every investigative journalist is a hero, while here we are spared heroic choices. It is only when our journalists venture into a world where these protections don’t apply that they face mortal dilemmas. Marie Colvin, James Foley, Tim Hetherington and Anthony Shadid made the heroic choice to report without the protection and constraints of a regime minder and they paid with their lives.

Had there only been international outrage over their killing as strong as over the killing of Kashoggi, Jamal would perhaps still be with us. But if Putin, or Assad, or the IDF can target journalists with impunity, the Saudis had no reason to be deterred. If we are going to end this impunity, we’ll need to start by ensuring that Jamal’s killers don’t escape accountability.

A year after the assassination of Anna Politkovskaya, at an event at the Frontline Club, Marie Colvin had told the gathering not to get bogged down in abstract digressions. The critical question she said was “Who killed Anna?” This is what journalism can and should help investigate. “Who killed Anna?” Because a public case creates the possibility of accountability. To establish truth is to create the condition for justice. Even if we can’t bring the killers immediately to justice, let them live their lives haunted by the prospect of future prosecution. We owe this to Jamal, whose killers are trying to rehabilitate themselves with the help of western patrons; we owe this to Marie, whose family is waging a valiant legal battle against the normalisation of her killers. But above all we need to protect the laws and institutions which would have protected Anna, Marie and Jamal had they been universal. We need to treat a threat to journalists anywhere as a threat to journalists everywhere.