Document:Outside In: The Trump Administration’s Plan to Remake the Middle East 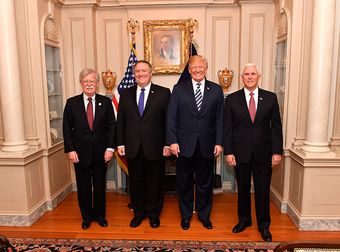 Donald Trump recently reiterated his promise to introduce a Middle East peace plan in the next few months.[1] That promise makes sense of a number of unusual and extreme events that have taken place recently.

On 15 February 2017, Israeli Prime Minister Benjamin Netanyahu and then newly inaugurated US President Donald Trump held their first official meeting. At the press conference that preceded that meeting, they discussed Trump’s promise to strike “a bigger and better deal than people in this room even understand.” Over the course of the press conference, Trump and Netanyahu would go on to unpack that cryptic remark in a way that eventually revealed the strategy that would make sense of the recent unusual events.

The single most clarifying lens through which to view Israel’s foreign policy history is the lens of the doctrine of the periphery. The doctrine of the periphery can be traced back to two leaders of Mossad: Reuven Shiloah and Isser Harel. But its central premise, that political compromise with the Arabs is impossible, may be traced back even further to Vladimir Jabotinsky. According to this perspective, Israelis look out from a tiny land to find themselves surrounded by Arab nations who are not only hostile to them but whose differences with Israel are so essential that compromise and friendship are impossible. This impossibility of political ties with its neighbours drives Israel to reach for alliances with non-Arab states just beyond the circumference of her neighbourhood: to the periphery. This local world view was adopted by David Ben-Gurion and became his doctrine of the periphery. Ben-Gurion was the architect of the first phase of Israeli foreign policy.

The second phase was ushered in by Yitzhak Rabin and Shimon Peres who pushed the pendulum to the other amplitude: enmity with the periphery and warming of relations with the neighbourhood. Under Rabin and Peres, Israeli foreign policy would focus on a New Middle East in which Israel would warm relations with its Arab neighbours in order to confront a new peripheral enmity with Iran.

So, when Trump said that his “administration is committed to working with Israel and our common allies in the region towards greater security and stability. That includes working toward a peace agreement between Israel and the Palestinians,” he was signing on to Netanyahu’s plan. For, who were the “common allies?” Taking his turn to talk, Netanyahu would supply the answer:

“For the first time in the life of my country, Arab countries in the region do not see Israel as an enemy, but, increasingly, as an ally. And I believe that under your leadership, this change in our region creates an unprecedented opportunity to strengthen security and advance peace.”

Hence, the “bigger” deal. Bigger, as Trump explained, because “It would take in many, many countries and it would cover a very large territory.”

Benjamin Netanyahu refers to his doctrine as Outside In: first you pacify the outside and ally with the Sunni Arab states outside of Israel, then, in exchange, you extract a peace plan out of them that you then impose inside on a Palestine now devoid of allies. You pacify the Sunni states by supporting them militarily and by providing them political cover generally, and by supporting them, specifically, in their opposition to Iran. You then crush Palestine and leave it helpless to hold out against a peace plan forced on them by Trump and supported by a bought off Arab world who has abandoned them.

The two Sunni Arab states that have to be bought and pacified are Saudi Arabia and Egypt. How do you subdue them? Join them in their confrontation with Iran and provide them with military and diplomatic support.

The Iran part was easy. Trump isolated Iran diplomatically by pulling out of the Joint Comprehensive Plan of Action (JCPOA) nuclear agreement and then isolated them economically with sanctions that attempted to prohibit anyone in the world from trading with Iran. With the US, Israel and Saudi Arabia now united against the common Iranian enemy, they were free, in the words of Netanyahu at the press conference, to “transform these common interests to create a productive partnership. One that would build a more secure, peaceful and prosperous Middle East.”

The next step was to provide Saudi Arabia and Egypt with the means and the military and political cover. This step was trickier and looked extremely odd. But it makes sense in the light of Trump’s promise of an imminent Middle East peace plan and the Outside In policy.

In order to allow the US to go on supporting Saudi Arabia in its war against Yemen and, specifically, to allow it to go on enabling Saudi bombing missions by refuelling their aircraft mid-air, the Trump administration, under the National Defense Authorization Act, had to certify to US Congress that Saudi Arabia was making sincere diplomatic efforts to end the war, taking measures to alleviate the humanitarian crisis, and protecting civilians. US Secretary of State Mike Pompeo did just that on 11 September 2018,[2] reassuring congress that “the governments of Saudi Arabia and United Arab Emirates are undertaking demonstrable actions to reduce the risk of harm to civilians and civilian infrastructure resulting from military operations of these governments.”

That step was trickier because Pompeo’s reassurance wasn’t true. The Saudi assault on Yemen has been at least as bloody and brutal as ever. A recent UN Human Rights Council report has “strongly suggested” that Saudi Arabia’s actions in Yemen could amount to crimes under international law.[3] It concludes that “There is little evidence of any attempt by parties to the conflict to minimise civilian casualties.” Oxfam agrees, saying that Pompeo’s certification was “openly defying and lying to Congress,” adding that “August was the bloodiest month so far in 2018 for civilians in Yemen.”[4] So, the Secretary of State lied to Congress to permit America to go on selling missiles to Saudi Arabia and to go on refuelling Saudi jets.

The move to win over the Outside looked no less bizarre in Egypt. While winning over Saudi Arabia necessitated lying about their government’s actions, winning over Egypt necessitated being honest about theirs. When Rex Tillerson was Secretary of State, he withheld $195 million from Egypt because of Egypt’s human rights abuses. But Pompeo freed the money up on 21 August 2018 even though, he admitted, “The overall human rights climate in Egypt continues to deteriorate.”[5] That is, the Trump administration reinstated the military funding it had withheld from Egypt due to human rights abuses, not because they are improving, but while they are deteriorating.

With the Outside brought onside with the termination of US diplomacy with Iran and the assurance of military support to Saudi Arabia and Egypt, Trump and Netanyahu could turn their attention to the Inside: the crushing of the Palestinians.

The first step was crushing them financially. So, Trump announced a more than 50% cut in American financial support for the United Nations Relief and Works Agency for Palestine Refugees in the Near East (UNRWA). That was followed up by a US State Department review of Palestinian assistance that was ordered by Trump that resulted in an additional $200 million of Palestinian aid being slashed.[6] Trump then closed the Washington office of the PLO[7] and redefined “refugee” to mean that you had to actually have lived in Mandatory Palestine prior to the creation of the refugee problem in 1948.[8] None of those refugees’ descendants count. That means you have to be over seventy to be a refugee. That means soon there will be no refugees to fund or to return to their homes: problem erased by definition. The Palestinians now were financially crushed, silenced and disenfranchised.

The only promise that is new about the promised peace plan is the way it will be forced on the Palestinians: no one has promised that the plan itself will be new. With Saudi Arabia and Egypt — the Outside — brought onside with the promise of continued military aid despite their crimes against humanity and violations of international law and the Palestinians weakened by being silenced, economically crushed and stripped of any friends to help them, the United States and Israel are now free to attempt to impose a peace plan on the Palestinians.

And that Outside In reality makes sense of the bizarre scenes of Mike Pompeo “lying” to congress about Saudi crimes in Yemen; of Pompeo certifying Egypt, not because human rights abuses have improved but because they have “deteriorated”; and of the onslaught of funding cuts and blows to the Palestinian cause despite Trump’s promise, after moving the American embassy to Jerusalem, that the Palestinians will “get something very good . . . because it’s their turn next.”[11]