Document:President Abbas’ Rebuke to Theresa May over Palestine 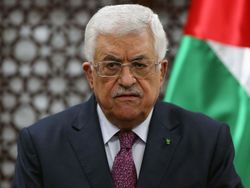 President Abbas of Palestine delivered a stunning rebuke to Theresa May in his speech to the UN General Assembly, which differed from his prepared and released script. What Abbas actually said was this:

My message to you, Mrs May, as Prime Minister of this country, if I may be so bold, is this: when David Lloyd George, your predecessor in the role, issued the Balfour Declaration on 2nd November 1917, he was committing a heinous crime against ninety-seven per cent of the population of Palestine. The evil consequences of that crime reverberate down to our present day. As an educated woman, especially one in such a high position, you know all that, I am sure.

Which is why I am astounded by your cold reluctance, your seeming inability, to be moved by the 100 years of misery, injustice, destruction and atrocities inflicted on the Palestinians by their oppressors, first the British, then the Israelis. You appear equally impervious to the cries of anger and frustration from thousands of people in this country, of all faiths and none, faced with HMG’s refusal to make good on the promise in the second part of the Balfour Declaration. A simple gesture of sympathy with non-Jewish Palestinians, the descendants of the indigenous Christians and Muslims of historical Palestine in 1917, would be a start. How can it not occur to you what an enormous benefit that would have for peace and security in the Middle East and wider afield?

The iconic suffering of the Palestinian people is a sore that needs to be healed. Only Britain has the ability to administer the healing balm. How long will they, and the world, have to wait, Prime Minister, for the healing to begin? When will you make a start?

The ignored part of the Balfour Declaration to which Abbas referred is of course:

“It being clearly understood that nothing shall be done which may prejudice the civil and religious rights of existing non-Jewish communities in Palestine.”

Israel not only continues its aggressive programme of illegal settlement building, it also continues to demolish Palestinian structures in the territories it occupies, including schools and medical facilities built by the European Union and its member states. I do urge you to read this truly shocking report from CNN. There are many other examples.

The Daily Mail published an article promoting the frankly ludicrous argument that the EU is acting contrary to international law by building schools and clinics in the occupied territories. The article is highly tendentious because the Mail fails to state that the legal “authority” it quotes, Alan Baker, is himself an illegal settler.

The author is Jake Wallis Simons. He is given to omitting essential information from his reports on Israel and its supporters. On 28 April 2017 Wallis Simons published an account in the Mail of a Palestinian support meeting in Parliament, from which pro-Israel supporters were removed by police after they were disruptive. The article is tendentious in saying that the Zionist disrupters were removed by police with machine guns. Armed police were present, due to recent terrorist incidents around parliament, but in fact they called in non-armed support to remove the noisy protestors, and there was over a five-minute delay for the unarmed officers to arrive.

But where Wallis Simons is particularly tendentious is in featuring prominently and quoting pro-Israeli activist Mandy Blumenthal in the article, with a glamorous photograph of her. Wallis Simons again fails to give the reader essential information – in this case that Ms Blumenthal is the partner of Mark Lewis, Mr Wallis Simons’ lawyer who is acting for Mr Wallis Simons to sue me for libel in the High Court. A reader of the Daily Mail article may have wanted to know of the author’s close relationship with the subject’s partner.

Mr Wallis Simons is Associate Editor of the Mail Online and thus, even though the byline is Rory Tingle, it is probably not unreasonable to associate him with the Mail Online’s even more sensational article about Mandy Blumenthal last month:

Ms Blumenthal is searching for property in Israel, and plans to leave within the next ‘few years’, but would emigrate within weeks if Mr Corbyn became Prime Minister.

This article is accompanied by an astonishing four photos of Ms Blumenthal, all copyright Ms Blumenthal herself, and three photos of her father. It is part an extraordinary puff piece for Ms Blumenthal – complete with posed cleavage shot I am not reproducing – and part a rehash of the Mail’s repeated attempts to associate Jeremy Corbyn with anti-Semitism. The article has no real basis at all – a threat by a little known person to leave the UK “in a few years”. Interestingly, though it tells us much about her late father, it does not mention her rather better known partner, Mark Lewis.[1]

It is legitimate to ask how on earth the Mail Online, Associate Editor Jake Wallis Simons, came to be publishing this extraordinary promotional piece for Mark Lewis’ partner at all.

Finally, here is a video clip of Ms Blumenthal in action again this month, this time with her brother, double glazing salesman and UKIP candidate (I did not make those up) Alan Blumenthal.[2] Yet again they were deliberately disrupting a pro-Palestinian meeting, this time featuring a Palestinian member of the Israeli Knesset as speaker. Mr Blumenthal is the balding man with spectacles and you can judge his behaviour for yourself.

Precisely why the Blumenthals feel the need to attend pro-Palestinian meetings and disrupt them, is an interesting question. One can easily imagine the outrage of the Daily Mail if I or others turned up to pro-Israeli meetings and behaved in this way. I might add I would not dream of doing so.

Jake Wallis Simons, Mandy Blumenthal and Mark Lewis form a nexus whose methods and motivations could not be more plain. Nevertheless that does not mean I cannot be in real trouble in having to make a libel defence against Wallis Simons, under England’s repressive libel system.

I continue urgently to need contributions to my defence in the libel action against me by Jake Wallis Simons, Associate Editor of Daily Mail online. You can see the court documents outlining the case [https://www.craigmurray.org.uk/archives/2017/09/save-craig-murray/ here. I am threatened with bankruptcy and the end of this blog (not to mention a terrible effect on my young family). Support is greatly appreciated. An astonishing 4,000 people have now contributed a total of over £75,000. But that is still only halfway towards the £140,000 target. I realise it is astonishing that so much money can be needed, but that is the pernicious effect of England’s draconian libel laws, as explained here.

On a practical point, a number of people have said they are not members of Paypal so could not donate. After clicking on “Donate”, just below and left of the “Log In” button is a small “continue” link which enables you to donate by card without logging in.

For those who prefer not to pay online, you can send a cheque made out to me to Craig Murray, 89/14 Holyrood Road, Edinburgh, EH8 8BA. As regular readers know, it is a matter of pride to me that I never hide my address.