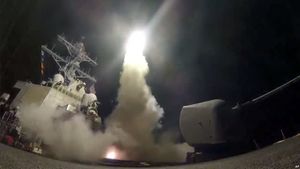 Last April, in one of the Trump administration's first "diplomatic" ventures, the US fired 59 Tomahawk missiles on Syria, in stated retaliation for the latest alleged chemical attack by the Assad regime, the same "false flag" excuse which was used by the US to officially enter the conflict back in 2013 when military tensions between the US and Russia nearly resulted in a regional war.[1]

Well, it appears that Assad is a relentless glutton for punishment, because not even a year later, the Washington Post reported two weeks ago that the US is considering a new military action against Syria for - what else - retaliation against Assad's latest chemical attack, which took place several weeks earlier.

How do we know Assad (and apparently, Russia) was behind the attack? We don't: in fact, former Secretary of State Rex Tillerson, in a moment of bizarre honesty, admitted that he really doesn't know much at all about "whoever conducted the attacks." But hey: just like it is "highly likely" that Russia poisoned Sergei Skripal the former Russian double agent in the UK - with no proof yet - so it is "highly likely" that a clearly irrational Assad was once again behind an attack which he knew would provoke violent and aggressive retaliation by the US, and once again destabilise his regime.

And so we now wait for that flashing, red headline saying that US ships in the Mediterranean have launched a missile attack on Syria, just like a year ago. Only this time Russia - which is allied with the Assad regime - is not planning to be on the defensive, and according to Russia’s Defence Ministry, "US instructors" are currently training militants to stage false flag chemical attacks in south Syria, i.e., the catalyst that will be used to justify the US attack on Assad. The incidents, the ministry said, will be used a pretext for airstrikes on Syrian government troops and infrastructure:

“We have reliable information at our disposal that US instructors have trained a number of militant groups in the vicinity of the town of al-Tanf, to stage provocations involving chemical warfare agents in southern Syria,” Russian General Staff spokesman General Sergey Rudskoy said at a news briefing on Saturday 17 March 2018.

According to General Rudskoy:

"Early in March, the saboteur groups were deployed to the southern de-escalation zone to the city of Deraa, where the units of the so-called Free Syrian Army are stationed."

"They are preparing a series of chemical munitions explosions. This fact will be used to blame the government forces. The components to produce chemical munitions have been already delivered to the southern de-escalation zone under the guise of humanitarian convoys of a number of NGOs."

And, using the exact same worn out narrative as last April, and every prior "chemical attack by the Assad Regime", the "planned provocations will be widely covered in the Western media and will ultimately be used as a pretext by the US-led coalition to launch strikes on Syria", Rudskoy warned.

"The provocations will be used as a pretext by the United States and its allies to launch strikes on military and government infrastructure in Syria."

Confirming the WaPo's report from early March, it now appears that an attack is imminent.

“We’re registering the signs of the preparations for the possible strikes. Strike groups of the cruise missile carriers have been formed in the east of the Mediterranean Sea, Persian Gulf and Red Sea.”

Rudskoy also warned that another false flag chemical attack is being prepared in the province of Idlib by the “Al-Nusra Front terrorist group, in coordination with the White Helmets.” The militants have already received 20 containers of chlorine to stage the incident, he said.

Moscow and Damascus have repeatedly warned about upcoming chemical provocations, and have highlighted that banned warfare agents have been used by the militants. Of course, none of that matters to the Western press which has its marching orders to expose the bloodthirsty killer Assad as an irrational despot who will use the exact same military method month after month and year after year, knowing well the response he will get from the US.

Meanwhile, just a few days ago, Syrian government forces reportedly captured a well-equipped chemical laboratory in rebel-held Eastern Ghouta. Footage from the facility has been published by the SANA news agency.[2]

The captured laboratory contained modern industrial-grade hardware of foreign origin, large amounts of chemical substances as well as crude homemade munitions and their parts. It was unclear if the chemical lab was capable of synthesising the Novichok nerve gas used in the attempted murder of the Russian agent in the UK that has resulted in the latest diplomatic scandal involving Russia and the West.