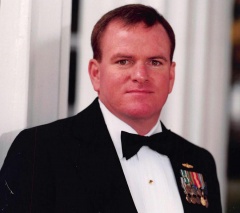 Two days ago, after the stunning Congressional override of Obama's veto of the Justice Against Sponsors of Terrorism Act (JASTA), aka the "Sept 11" bill, we wondered how long until the first lawsuit by a Sept 11 victim naming Saudi Arabia as a defendant would emerge.[1]

We didn't have long to wait.

On Friday, September 30, a woman widowed when her husband was killed at the Pentagon on 11 September 2001 became the first American to sue the Kingdom of Saudi Arabia in Washington DC District Court, just two days after Congress slammed Obama for siding with Saudi Arabia, overriding his presidential veto only for the first time in his administration, and enacting legislation allowing Americans to sue foreign governments for allegedly playing a role in terrorist attacks on U.S. soil.

Stephanie Ross DeSimone alleged the kingdom provided material support to al-Qaeda and its leader, Osama bin Laden. Her suit is also filed on behalf of the couple’s daughter. DeSimone was two months pregnant when her husband, Navy Commander Patrick Dunn was killed.

She is suing for wrongful death and intentional infliction of emotional distress, and is seeking unspecified compensatory and punitive damages.

In the lawsuit she alleges that "at all material times, Saudi Arabia, through its officials, officers, agents and employees, provided material support and resources to Osama bin Laden (“bin Laden”) and Al Qaeda. The support provided by Saudi Arabia to bin Laden and Al Qaeda assisted in or contributed to the preparation and execution of the September 11th attacks and the extrajudicial killing of Patrick Dunn."

She adds that "Al Qaeda was funded, to the tune of approximately $30 million per year, by diversions of money from Islamic charities" and explains

"Al Qaeda’s development into a global terrorist network was funded primarily by the money and other material support it received from the Kingdom and purported charities acting as agents and alter-egos of the government of the Kingdom of Saudi Arabia, many of which worked with the Al Qaeda leadership during the Afghan jihad. These governmental agents served as the primary conduits for channelling financial, logistical, operational, and ideological support for Al Qaeda’s global jihad for more than twenty years."

Fifteen of the 19 men who hijacked airliners used in the attack were Saudi nationals. One jet struck the Pentagon, seat of the U.S. military, two destroyed the World Trade Center’s twin towers in New York while another crashed in a Pennsylvania field as its passengers fought back against the hijackers.

While a U.S. commission that investigated the 2001 attacks said in a 2004 report that it “found no evidence that the Saudi government, as an institution, or senior officials within the Saudi government funded al-Qaeda”, this will be the first time that a US court will be forced to rule if Saudi Arabia was indeed responsible. The kingdom has previously denied culpability. Its embassy didn’t immediately reply to an e-mailed message seeking comment on the suit.

An official at Saudi Arabia’s Ministry of Foreign Affairs told the state-run Saudi Press Agency on Sept. 29 that the U.S. Congress must correct the 9/11 bill to avoid “serious unintended consequences,” adding the law is of “great concern” to the Kingdom.

Well, thanks to this lawsuit, Saudi Arabia will now be able to provide its opinion in court. Here is what it will have to deny, courtesy of DeSimone's lawsuit:

Beyond the massive financial sponsorship of Al Qaeda’s global jihad, the Saudi government, through its agents, officials and purported charities, has been intimately involved in all aspects of Al Qaeda’s operations including:

The full 54-page lawsuit laying out the plaintiff's entire case is presented here. And now that the first lawsuit has been filed, we expect a deluge of similar lawsuits. It remains unclear if, now that it is about to be dragged into countless US courts, Saudi Arabia will execute on its threat from 6 months ago and proceed to sell billions in Treasuries and other US assets.[2][3][4]